Immigration: A promise for the future 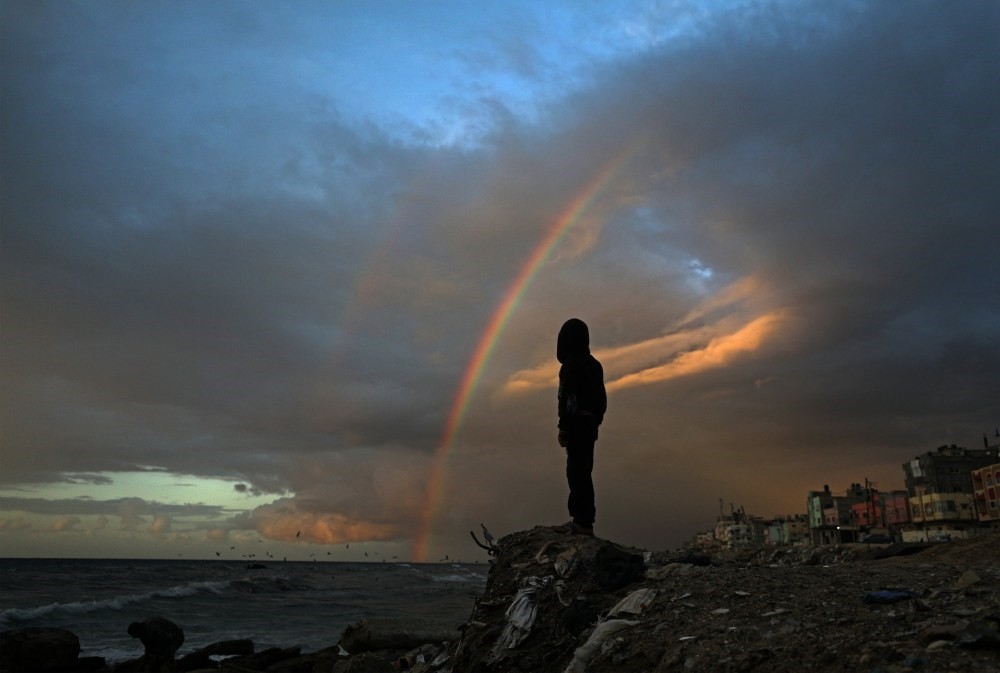 Palestinian refugee youths play near a beach next to the al Shateaa refugee camp in northwestern Gaza. Following the 1948 Arab-Israel conflict, millions of Gazans have been driven from their homelands.
by Jane Louise Kandur Feb 03, 2018 12:00 am

Immigration has been a force that has driven fluctuations in populations for centuries; early humans were nomads, constantly migrating, up until the agricultural revolution. With growing warfare migrations increased and the 15th century saw two significant migrations - the Jews from Cordoba to the Ottoman Empire and the Pilgrims who fled Britain to settle on the East Coast of America

Many politicians have used immigration as a bogeyman to put fear into the electorate. From Brexit to European elections and Trump, the immigrant has had an important role to play. But this is a role that the immigrant plays unwittingly and unwillingly.

Migration, or immigration, is not something taken on lightly. My own ancestors left France in the 18th century, fleeing religious persecution. Another branch of my family fled Russia during the Russian Revolution to settle in Berlin, and then found themselves driven out under Hitler's fascist regime. My own parents left England as part of the great brain drain, moving to America where a better future had been promised them.

There are many reasons to leave one's home. Religious persecution, war, injustice, famine, or just plain economic need. It is impossible to say that one reason for immigration is more justified than another. All forms of immigration are directly connected to one simple factor - Survival.

When the Pilgrims were fleeing persecution in England they were not welcomed with open arms at Plymouth Rock. The Indians, inhabitants of this land for over 10,000 years, were wary of these newcomers, and puzzled by their inability to try to survive. The Native Americans stepped in and showed them how to plant crops. The descendants of the newcomers were to later return this gracious treatment by slaughtering the native population. These same descendants however opened their arms to immigrants from Europe.

The Ottoman State was one country that welcomed immigrants from the very beginning. In the 14th century, the Jews who had been expelled from Hungary and France were welcomed in the Ottoman State. Sultan Bayazid II took in Jews fleeing the Inquisition in Spain, and saw their presence not as a negative, but rather as something that could only enrich the Ottoman Empire.

Of course, other peoples immigrated to the Ottoman Empire, leading to the creation of a rich and varied society. Immigration was always seen by the Ottomans as a positive influence. When people fled the wars in the Balkans, seeking refuge, the people of Istanbul opened up their houses to take the refugees in. This was simply their civic duty.

But times have changed. Now refugees are the bogeyman that are used to terrify the electorate into voting for a right-wing leader in Europe and America. Rather than welcoming immigrants, the American leader is planning to erect a wall to keep them out. Europe, given texture and variety by immigration, is tightening its borders to keep newcomers out, quite often at the cost of human life.

But not all countries, not all leaders see immigration as a threat, as something to be avoided at all costs. When the Syrian war broke out in 2012, people started to head to the Turkish border to seek safety. The Turkish border was not slammed shut in the face of these desperate people. Rather the Syrian refugees were welcomed. Camps, the best refugee camps anywhere in the world today, were set up. Cities like Gaziantep took the necessary steps to improve their infrastructure, to absorb these newcomers. And cities like Gaziantep thrived, finding new life, new economy and new impetus with the growing population.

The presence of the Syrians is not something that is taken for granted in Turkey. They are being included in education, but it is a slow process. They are eligible to free health care. They have brought a new language and a new culture. Some streets in Istanbul are now known as "Little Syrias."

But there are also problems. The Turkish curriculum - in particular, the way World War I and the period that followed is depicted in the history books - is confusing for the Syrian population. Health care may be free, but often the Syrian patient does not speak Turkish and the Turkish doctor does not speak Arabic. There are those in Turkey who react negatively to the Arabic language and the Syrian culture.

But Turkey still refuses to close its gates to the Syrians. It has not turned them away and it will not turn them away. At the moment, the Turkish military is actively involved in trying to clear a safe zone around the Syrian Turkish border. This safe zone is something that Turkey has repeatedly stated is absolutely essential. With the establishment of a buffer zone, some of the Syrian citizens can return to their country. If they so wish. Those who want to stay will be welcome to stay.

Turkey is not alone in this. Pope Francis has repeatedly stated that a more positive approach to immigration is not only a Christian duty, but absolutely essential.

That is, two major world religions see receiving immigrants as a positive move, as an impetus to growth and more importantly, as their duty.

The pope first deals with how we should perceive migration today. Rather than seeing the immigrants/migrants/refugees as desperate people who will merely be a burden to their new country, the pope has said that "...migration should nevertheless be recognized, not as a new phenomenon, but rather as a natural human response to crisis and a testament to the innate desire of every human being for happiness and a better life."

Pope Francis has said that his followers should open their arms to migrants and refugees. They should stand with "arms wide open, ready for a sincere, affectionate, enveloping embrace..."

Caritas (the union of Catholic relief, development and social agencies) states that people should realize that what we are facing is "...not a migration crisis, but a crisis of global solidarity." Caritas, and the pope call on people to change perceptions.

For the pope, the rights and safety of immigrants must take precedence over national security concerns.

As stated above, leaving one's home is not a decision taken lightly. Pope Francis sums it up well: "We see the tracks of entire families forced to set out in our own day. We see the tracks of millions of persons who do not choose to go away but, driven from their land, leave behind their dear ones. In many cases this departure is filled with hope, hope for the future; yet for many others this departure can only have one name: Survival."

Those who are leaving their home and hearth due to war or violence generally do not make long journeys. They go to the nearest safe haven. They leave their country with the thought that they will return as soon as it is safe. It is for this reason that there are many more Syrians in countries like Lebanon and Turkey than there are trying to get into Europe.

Pope Francis also has touched upon Turkey's efforts to help asylum seekers. Addressing the European Parliament in 2014, the pope said: "Turkey, which has generously welcomed a great number of refugees, is directly affected by this tragic situation on its borders; the international community has the moral obligation to assist Turkey in taking care of these refugees. In addition to providing much needed assistance and humanitarian aid, we cannot remain indifferent to the causes of these tragedies."He also states that developed countries have a share of blame in encouraging immigration: "We cannot remain indifferent to the destinies of millions of migrants and refugees knocking on the doors of wealthy nations. The unrelenting consumerism of some more developed countries is gradually depleting the resources of our planet. The growing inequality in the distribution of material goods increases the feeling of the injustice of the international order that has emerged."

The pope reminds the European Parliament that Europe is the homeland of human rights. He says that "whoever sets foot on European soil ought to sense this, and thus become more aware of the duty to respect and defend those rights. Unfortunately, some, including many infants, could not even make it to these shores: They died at sea, victims of unsafe and inhumane means of transport, prey to unscrupulous thugs."

The pope has spoken about the refugee problem that the world faces in very many different places and on very many occasions. Perhaps one of the most significant sentences he has uttered is that: "While it is true that migrations often reveal failures and shortcomings on the part of States and the international community, they also point to the aspiration of humanity to enjoy a unity marked by respect for differences, by attitudes of acceptance and hospitality which enable an equitable sharing of the world's goods, and by the protection and the advancement of the dignity and centrality of each human being."

Pope Francis also remarks that "At this moment in human history...identity is not a secondary issue. Those who migrate are forced to change some of their most distinctive characteristics and, whether they like or not, even those who welcome them are also forced to change. How can we experience these changes not as obstacles to genuine development, rather as opportunities for genuine human, social and spiritual growth...?"

Finally, Pope Francis says that our response to immigrants should be articulated by four verbs: To welcome, to protect, to promote and to integrate. The first three verbs speak for themselves, but how the pope interprets the fourth verb is very interesting. "Integration is not ‘an assimilation that leads migrants to suppress or to forget their own cultural identity. Rather, contact with others leads to discovering their ‘secret,' to being open to them in order to welcome their valid aspects and thus contribute to knowing each one better. This is a lengthy process...making them more and more a reflection of the multi-faceted gifts of God to human beings."

In other words, welcoming strangers, allowing newcomers into our land will only make us into more multifaceted human beings. If the world learns how to approach immigration from a positive perspective, we will become better people, better humans. And societies made up of better people will consequently become better societies. And the world will become a better place. It might sound like a dream, but there is nothing wrong with having a dream and doing whatever you can to realize it.