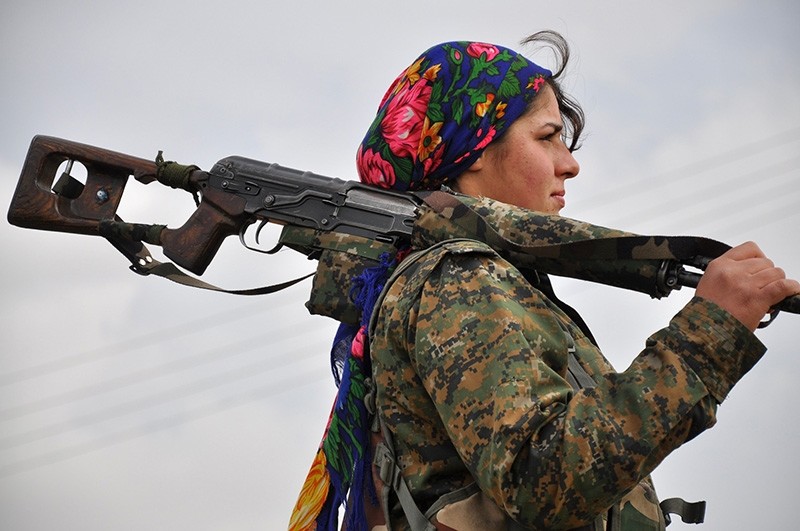 Especially since the launch of Turkey's Operation Olive Branch against PKK-linked YPG terrorists in Syria, The New York Times has turned into a platform for the group's women's affiliate YPJ, which uses feminist rhetoric as a tool to aestheticize terror

Will there come a day when The New York Times publishes an op-ed piece by a Daesh terrorist, or is it enough for now to provide a platform for People's Protection Units (YPG) terrorists to whitewash themselves disguised as pacifists? Since Turkey launched a military operation against the YPG in Syria's Afrin region, the newspaper has been paying special attention to the wellbeing of the members of the group, so much so that even Nujin Derik, the commander of the Women's Protection Units (YPJ), the women's branch of the YPG, wrote an op-ed for the paper on Monday, "We Fought for Our Democracy. Now Turkey Wants to Destroy It," letting the group take their provocation to a much higher level in mainstream media. In addition to that, an article by Rod Nordland, published on The New York Times website a day before the first one, with the title "Female Kurdish Fighter Kills Turkish Troops in Likely Suicide Bombing in Syria," portrayed the YPJ's terrorists as heroines who are brave enough to take a stand against Turkey's invasion.

Let me say from the very beginning that the instrumentalization of women as a means to legitimize violence and acts of the YPG, an affiliate of the PKK, itself recognized as a terrorist group by the U.S., EU and NATO, is of no use whatsoever, as it does not change the fact that a terrorist is a terrorist, no matter what gender.

Without a moment to spare, let's start with the first piece. YPJ leader Derik invites the world to become a partner in their crimes with the opinion piece she wrote for the American newspaper. Aside from all the elements of some heroic saga that she thinks her group accomplished what they consider their fight for democracy, Derik resorts to this very typical tactic to speak in the name of women who supposedly pursue liberation in their battle against Turkey, which she believes is "a different evil" that allied itself with "Islamist jihadists." That part of the story is not new, as we keep seeing how Turkey, a country that suffered long enough from the PKK's brutal attacks and is now more than resolute to not give passage to any terrorist threats, is depicted as an invader in Syria since the beginning of Operation Olive Branch. What Derik additionally does, and The New York Times mirrors, is to sugarcoat all the violence of the group under the guise of fighting for women's liberation.

Once women were equated with innocence and fragility, as beautiful souls, in American political philosopher Jean Bethke Elshtain's terms, waiting for their men at war to come back home. However, feminism stood against such discourse, with the idea that it gives women no agency in warfare. In the age of mediatized warfare, nevertheless, there has been a considerable change regarding the way women are represented in war. Adapting feminist discourse for their own purposes, a terrorist woman can now be praised as a freedom fighter who kills for women's liberation and empowerment, which is what the two New York Times articles, directly or not, also do with eulogies to the YPJ fighters.

Among accusations against President Recep Tayyip Erdoğan of crushing dissent, threatening democracy and centralizing power, the YPJ's chair portrays the president in her opinion piece as "an enemy of women" in order to turn the armed group's terrorism into a women's issue with which the world can empathize. In the name of those female fighters, she takes a chivalric oath to "resist invaders" in Afrin. The way she idealizes the YPJ sounds as if the armed women never hurt any civilians, let alone killing soldiers, but they just fought against terrorists like Daesh. One can say that it is the same old stuff but a different day when the leader of such a group tries to legitimize its terrorist actions in the name of democracy and freedom. However, using womanhood to legitimize terrorism is far beyond that, and even worse.

When it comes to Rod Nordland's article, it similarly reads like a eulogy to the YPJ's Zuluh Hemo, whom he describes as "a female Kurdish fighter" who killed "several Turkish soldiers with a grenade" in order to prevent the advance of Turkish soldiers and Free Syrian Army (FSA) fighters toward Afrin. Taking direct quotes from the YPJ's statement in which the 20-year-old terrorist is hailed as a heroine and "a model for free Kurdish women," Nordland does not just report but also informs the reader that this young fighter was likened to Arin Mirkan, another YPJ suicide bomber who had previously attacked Daesh in Syria. Putting Daesh and Turkish soldiers into the same basket against the YPJ is a clever way of representing those terrorists as icons of female liberation and resilience, which is identical to what the YPJ's leader did in her op-ed when she compared the YPG's fight against Turkish soldiers to their previous fight against Daesh in Raqqa in order to justify the YPG's terroristic actions during the Afrin operation.

For those who did not get enough YPJ propaganda, Nordland's article offers more by sharing two videos, one a Facebook video of Humo singing as well as pictures of her, and another from the YPG press office in which the reportedly female suicide bomber's story is lauded in addition to some other terrorist women. Unlike the clear-cut distinction between being a beautiful soul and an active fighter that the YPJ leader made in her opinion piece, Nordland's article seems to combine both. In one of the videos accompanying the article, Humo says: "People told me to stay at home, that I'm too soft to carry weapons, that I'm not tough enough to fight, yet I knew that this step would be the first of many." No matter how young she is, positioning a terrorist against all those previous arguments that women suicide bombers are incapable of making their own choices to participate in warfare, the video characterizes the young terrorist as having agency, leaving no space to any bigger arguments like the aestheticization of terrorism.

I do not think there is any need to say that the second article, which extensively quotes what the women in the YPJ forces think of the Afrin operation, does not report any information from Turkey's perspective other than giving the numbers of YPG casualties and stressing Erdoğan's threats. Nevertheless, it is a rather different story, so let's return to our subject and sum up: Framing YPJ terrorists as peaceful guardians as they hold guns to allegedly only target jihadists or evil under the guise of women's freedom and empowerment does not justify the group's terrorism at all.