YPG forcefully recruits children to put in line of fire 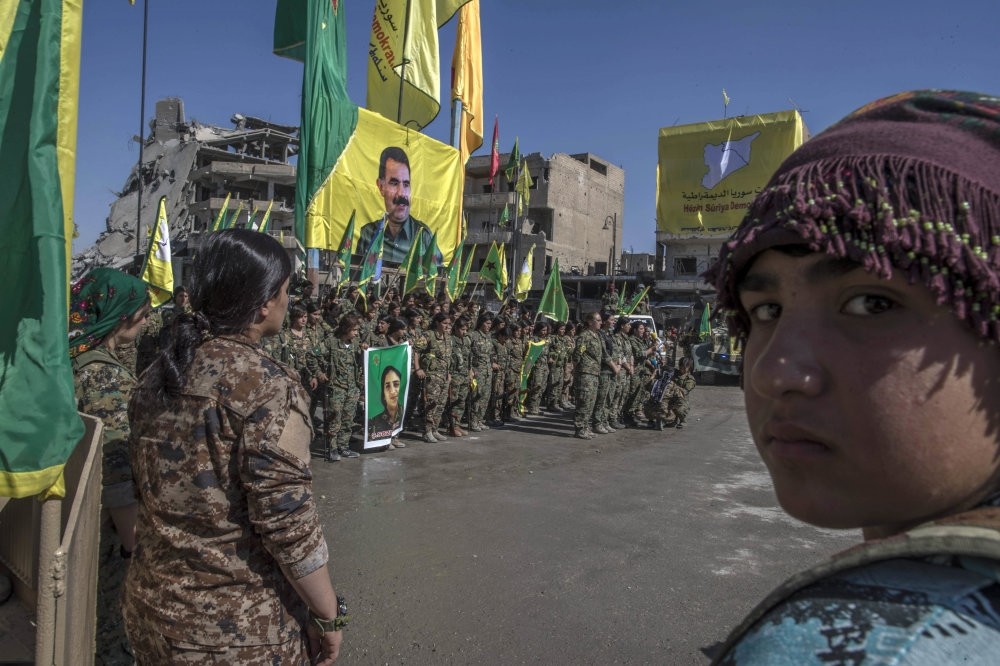 Terrorists from the Women's Protection Units (YPJ), the women's branch of the YPG, that recruits children, celebrate their so-called victory holding a flag bearing the photo of PKK leader Abdullah u00d6calan in Raqqa, Syria in October 2017.
by Ayşe Betül Bal Feb 13, 2018 12:00 am

Terrorism, whether it is executed by Daesh or the YPG, does not favor children and often puts them in the line of fire as long as it serves their agendas

No child is safe in areas the PKK terrorist group gains influence. The PKK is known to kidnap and brainwash teenagers in southeastern Turkey, with protesting parents becoming a common sight in many cities across the country. It is no surprise that the PKK's Syrian affiliate copies the recruitment methods of its sister group. In much of northern Syria under its control, the People's Protection Units (YPG) launched a recruitment drive specifically targeting children, aware that children can easily be brainwashed at such an impressionable age.

What happened to Ali Abdullah Ali, 13, a student from al-Muabbada, in the northeast corner of Syria, on Sept. 20, 2014, is repeated almost everywhere the YPG controls. Returning from school, YPG militants abducted Ali in what the terrorists call recruitment. Without his parents' consent, they took him somewhere to indoctrinate him into the ideology espoused by Abdullah Öcalan, the imprisoned leader of the PKK. When his desperate parents tried to find out his whereabouts, the YPG claimed ignorance.

Just like Ali, another minor, Rosin Muhammad Husayn, 13, was kidnapped by the YPG in May 2014. When her parents demanded their daughter's return, members of the Asayish security forces of the YPG-held region forcibly dispersed their demonstration. There are several cases of minors being forcibly recruited that have been documented by KurdWatch, a project of the European Center for Kurdish Studies based in Berlin, Germany. Its report gives examples of recruited children as well as those who tried to escape and were killed. The families were being threatened to not speak about their children being kidnapped or were told that their children had voluntarily joined the militia. Nurman Ibrahim Khalifah, 13, who was kidnapped and brought to a PKK military camp in Iraqi Kurdistan, where she was to be trained, in an interview with KurdWatch said that hundreds of minors are being held in PKK camps in the mountains of Iraqi Kurdistan.

Daesh, YPG kidnap and recruit children in name of war

As Turkey's southern neighbor descended into a civil war, warring factions competed with each other to recruit children. As rights groups make clear, the YPG and Daesh took the lead in this regard.

Daesh attracted the ire of the entire world as it recruited many children and broadcast footage of them committing war crimes. The international community recognized a brutal terrorist organization and mobilized to take it down.

When it came to the YPG, it was portrayed more as an idealist and even equal opportunity group that encouraged women to join as fighters. Coverage of the group seemed more like a PR campaign. As Western media praised the YPG's foreign fighters, the U.S. started providing arms to the group.

That the PKK and YPG are one and the same and that the group was kidnapping children to fight on the front lines were ignored, as was the loyalty declared by both groups to Öcalan. Moreover, the U.S. and EU recognize the PKK as a terrorist group.

The YPG is quite open about its tight links to the PKK. It is the U.S. that wants a less conspicuous display of pro-PKK and pro-Öcalan propaganda to hide its complicity.

Meanwhile, the reports of the YPG kidnapping children has piled up. According to a report from the United Nations Special Representative for Children and Armed Conflict, published in April 2016, there were 362 cases in which children were armed. While most of them were abducted by Daesh, a considerable number were fighting under the flag of the YPG.

Ali's hometown of al-Muabbada, which is part of the Jazira canton, has been under the tight control of the YPG and the Asayish since they first declared an autonomous administration in January 2014. The group imposed its rule over Jazira, Afrin and Ayn al-Arab, also known as Kobani. The population of these regions was mixed, with Kurds, Arabs and Turkmens.

The heavy handed tactics date to the declaration of autonomy. The residents of the villages in the al-Muabbada area were confronted with YPG and Asayish oppression. Houses of Turkmens and Arabs were demolished along with those belonging to Kurds who did not support the political and military policies of the PYD and YPG. Many were forced to leave the region. However, those who stayed were no better off. Ali was just one of the thousands of children exploited by the YPG and its female branch, the Women's Protection Units (YPJ), in their fight against Daesh, but also other groups that oppose the Bashar Assad regime.

Human Rights Watch documented cases of children aged under 18 joining the YPG and YPJ and fighting in their ranks. There were also some other organizations focused on the same issue.

Some children are abducted from their families while some others are brainwashed and join these organizations themselves. Regardless of whatever their motives are, children ultimately face a situation in which they kill or are killed.

Children in search of identity are biggest targets of terrorists

The education of a teenager is highly important since they are open to developing their perspective on the world in these years. Psychiatrist Kemal Sayar, speaking on the issue, said: "Children are often in search of an identity in their adolescence. Thus, they are very vulnerable to those who impose their own ideologies on them. When they are told about a certain enemy, whether it be a person or country, it is easy for them to act according to what they are told because they see themselves more valuable in that way."

A dying child is also used as a recruitment tool. They use children in brutal terrorist campaigns, making good propaganda materials of their dead bodies, broadcasting how brave they were to stand against tanks and fully armed soldiers or, in some cases, blowing themselves up as suicide bombers. After all, what can be better advertisement for the YPG than a photograph of a teenager holding a gun and smiling?

Recently, after the Turkish Armed Forces (TSK) launched Operation Olive Branch in Afrin with Free Syrian Army (FSA) elements to secure the border, the YPG escalated its propaganda war against Turkey. It is once again exploiting children.

On Jan 28, 2018, a member of the YPJ, Zuluh Hemo, 20, carried out a suicide bombing attack on a Turkish military convoy. Her own unit released a statement that said: "The heroine, Avesta [her nom de guerre] attacked the tank and blew herself up," describing her as "an example for free Kurdish women." She was also a minor when she first joined the militia at 17 years old, even though it is unclear if she joined voluntarily or was forced to do so. In any case, it seems that they are capitalizing on her suicide attack, spreading videos of her singing in her military unit before she blew herself up.

Talking about dying or killing should not be normal in a child's world, Sayar said: "The children used in that kind of organization are being transported into a different world that is seen as normal. The normal ideas or childhood are taken away from them and they are turned into killing machines. They became dull, lifeless and emotionless. Thus, if they surrender or are rescued, the process of recovery is equally important. They should be in a long-term rehabilitation program to keep up with their peers emotionally and psychologically."