Relying on a biased source to run smear campaign against Turkey 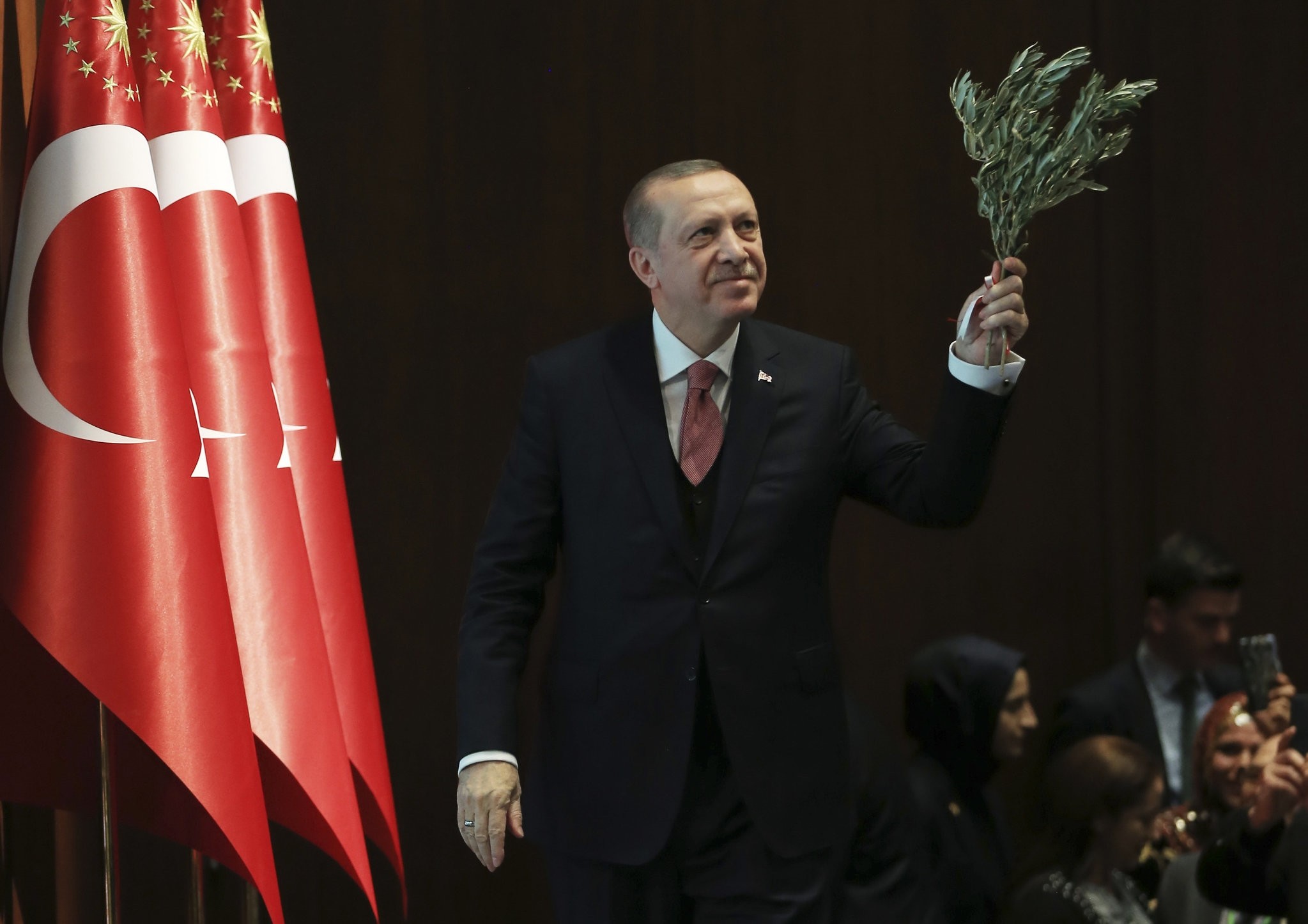 President Recep Tayyip Erdou011fan holds an olive branch as he goes on stage to deliver a speech in Ankara.
by Özge Bulur Mar 13, 2018 12:00 am

Bloomberg View columnist Eli Lake's article published online in the first week of March adds to the wave of anti-Erdoğan sentiment by giving credence to an unfounded claim from a biased source, Hasan Haqqani, who likens Turkey to Pakistan

An opinion piece on Bloomberg View by Eli Lake put forward a claim a few days back that Turkey was about to be "the next Pakistan." Let's face it, from the very beginning an anti-Turkey argument has been almost always retweetable, if not sound, and so was this one. On the assumption that Islamization is tied around Turkey like ivy as it once was in Pakistan where "military leadership has tolerated and advanced a vision of political Islam deeply hostile to U.S. and Western interests," the article claims that Turkey is on the verge of being the new Pakistan with a minor difference: Turkey's Islamization is being done by President Recep Tayyip Erdoğan, not by the military.

To serve this end, the rest of the article tries not to leave any stone unturned with references to failures in the Turkish economy, the Syrian war, the Afrin operation, press freedom and many more in subordinate clauses, all allegedly because of Erdoğan. Putting all arguments aside, one rather interesting, or maybe attention-grabbing, point of the article is that Lake supports this Turkey-turning-into-Pakistan claim with quotes from Husain Haqqani, rendering the whole argument meaningless. Do those retweeting accounts know why?

Haqqani served as Pakistan's ambassador to the U.S. from 2008-2011 and was in close contact with the Rumi Forum, a Washington-based nongovernmental organization linked to the Gülenist Terror Group (FETÖ). Describing the leader of the group, Fetullah Gülen, as "one of the greatest Islamic thinkers of the 21st century," in one of the Rumi Forum's events he moderated on Apr. 17, 2015 (goo.gl/MGn59J), Haqqani's anti-Erdoğanism is nothing new, for obvious reasons. In his article "Turkey's Struggle for Checks and Balances" for U.S.'s The Daily Beast published on March 1, 2014, for instance, Haqqani sharply criticized Erdoğan saying he "blames Gülen's followers entrenched in Turkey's judiciary and the police system of fabricating the corruption allegations."

His tweet on Oct. 19, 2015 was no different than the article, as he said, "#Erdogan continuing with his terrible behavior #Turkey #Gulen," in reference to a news article by Agence France-Presse (AFP), which announced that Gülen "will go on trial in absentia in January on terrorism charges for allegedly conspiring to bring down President Recep Tayyip Erdogan through a vast government corruption probe." Only two of his previous statements encapsulate how much Haqqani has tried, and still is, to carry anti-Erdoğanism in excess, no matter how baseless his arguments may sound. At this point, a reminder to the reader may be pertinent: The personal or ideological affiliations of people who give insight to media outlets may be more telling than what they say. In this case, nothing more than an anti-Turkish or anti-Erdoğan stance could be expected from a former diplomat with links to FETÖ, the arch enemy of Turkey and its current president.

Haqqani's unconvincing comments do not only stem from his hostility toward Turkey. The former ambassador has indeed more issues with his home country where he refuses to return. In May 2011, Haqqani allegedly gave a memo to a high-ranking American official in an attempt to seek help from the U.S. against possible military intervention in Pakistan, in addition to the claims that he issued visas to CIA and Indian agents while serving as an ambassador. After such a scandal, known as Memogate, a case was launched in the Supreme Court against Haqqani and he was forced to quit his title as ambassador.

Haqqani denied any such role of lobbying and left the country in Jan. 3, 2013 after a commitment with the court that he would come back to face charges, and yet he never did. Six years later, the Memogate case reopened and the Federal Investigative Agency of Pakistan asked Interpol to issue a red warrant against Haqqani only three weeks ago, since his "lobby gets active with judicial proceedings," further activating anti-state lobby across the country, an additional attorney general said this Feb. 28, as reported by the Pakistani news broadcaster Geo News. While the then-Pakistan Peoples Party (PPP) government also pointed the finger at Haqqani for "treason and maligning the country's armed forces at the behest of anti-Pakistan elements," while the Memogate case fell under sections 120b (hatching a criminal conspiracy) and 121a (waging a war against Pakistan) of the Pakistan Penal Code.

With his anti-state lobbying for his country in one hand and pro-Gülen propaganda in the other, it seems the optimal maneuver for Haqqani to liken Turkey, whose leader is committed to ending FETÖ, to Pakistan, from which he escaped more than a decade ago. By accusing Erdoğan of "trying to do the same" as Pakistan's Zia, which includes mixing hard-line nationalism with religiosity, marginalizing secular schools and creating institutions for Islamization, Haqqani himself indeed is trying to do the same as he once did in Pakistan, lobbying against the state, but this time directing it against Turkey.

Putting Eli Lake's own biases aside, since he thinks Erdoğan "sounds like a terrorist" and follows an ideology of scapegoating Kurds, Lake has made a big mistake by taking insight from a biased diplomat who only instills hatred against the governments of Pakistan and Turkey.