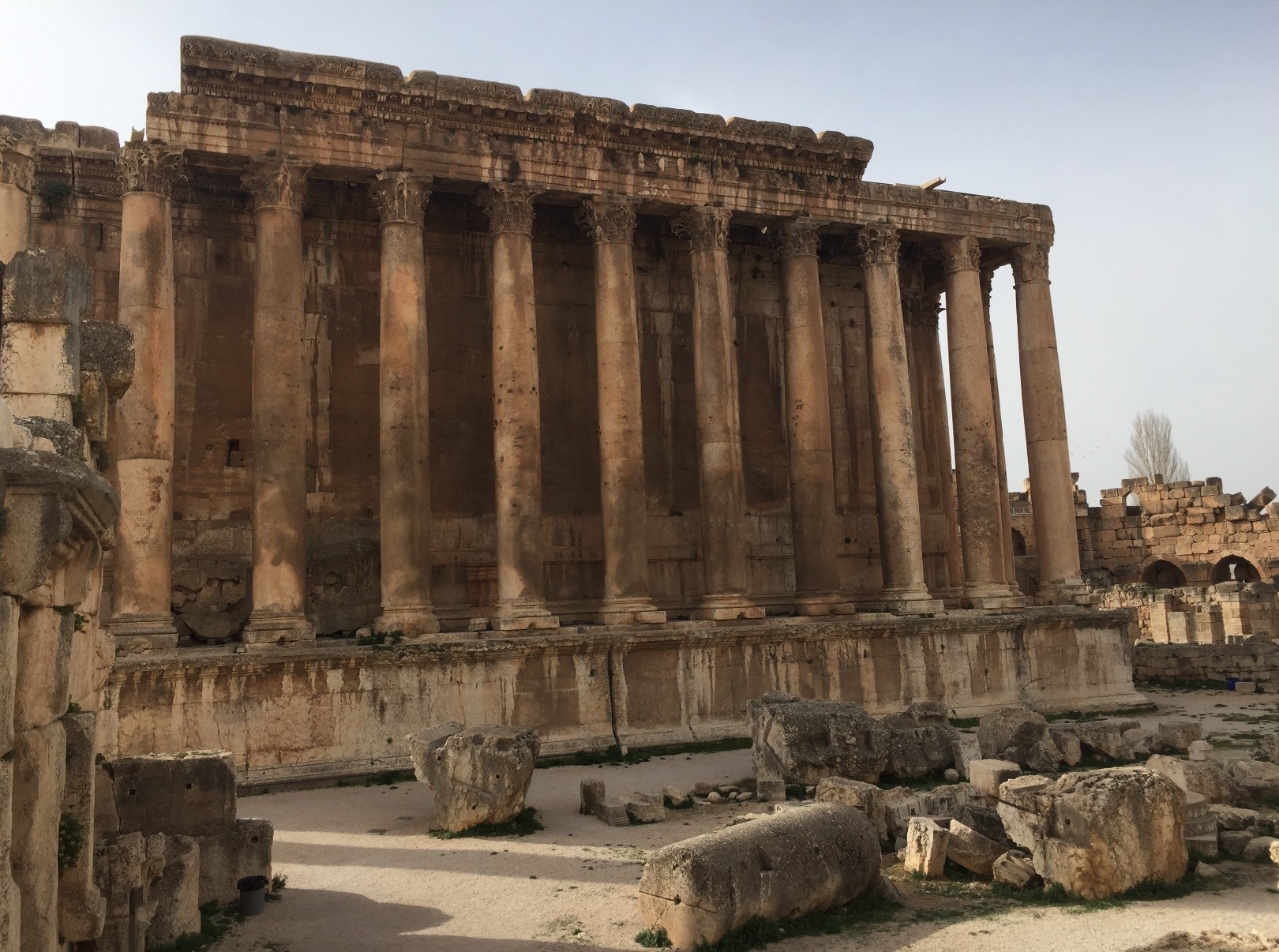 Despite the picture that western movies try to portray, Lebanon is a place where the old and new coexist with its people of many different religions and communities

If you follow my columns you may know I am an avid traveler. Having visited over 70 countries at this point, I've found that at times I need a break from the local cuisine. When I am no longer in the mood to experiment with the local fare and need a guaranteed good meal, there's almost always a readily available constant wherever I am in the world, Lebanese food. Whether it's in the Americas, throughout Europe or in any major city in Africa, there's always a Lebanese restaurant nearby. I've wondered why and although the food speaks for itself, I'm pretty sure it's because Lebanon has been ravaged by so many wars since modern Lebanon was founded -most recently the civil war of the 70s and 80s- that at least twice as many Lebanese live outside of Lebanon than within. Long on my list of must-see places, I just got back from Lebanon and my only regret was putting it off for so long.

Lebanon was not at all what I had expected it to be. Western movies and media continually depict Lebanon as war-torn and impoverished. I had an opportunity to travel from Tripoli in the north to Tyre in the south and east in the Beqaa valley and this image is not at all accurate. At no time did I feel threatened or uneasy about safety anywhere in Lebanon. Beirut is very much a modern city with the occasional bullet-ridden building preserved and left on purpose to remind people of the destruction of civil war and is also bustling with new construction projects and modern shopping centers. From a tourist's perspective, the ancient ruins of Baalbek, Tyre, and Byblos rival Rome itself in their preservation and grandeur. The scale and completeness of the ruins at Baalbek in particular exceed any ancient ruins I've seen anywhere else in the world.

One of the things that I was surprised to see was the seal of the Ottoman Sultan Abdulhamid II at both the Roman ruins of Baalbek and the Beiteddine Palace in the Druze town of Deir al-Qamar. While touring Baalbek a Turkish friend of mine from Ankara, who I had sent pictures to, remarked that it was "a good thing the Ottomans never conquered these lands or they would have destroyed the pagan temples." A quick brush-up on history reveals quite the opposite. The temples of Baalbek and elsewhere in Lebanon were not only under Ottoman control for nearly 400 years but many were also discovered by the Ottomans themselves and protected as heritage sites. Contrary to the perverted views of Daesh and other so-called "Islamic" groups, freedom of religion is very much a part of Islam. Nowhere is this more apparent than in the tolerance shown by the Ottomans to the various religious groups in Lebanon and the care shown by the Ottoman Caliph to the places of worship of all religions throughout Lebanon. Had the Ottomans wanted to, they could have, at any time, destroyed these sites but just as they did not do so throughout the empire, they also did not do so in Lebanon. 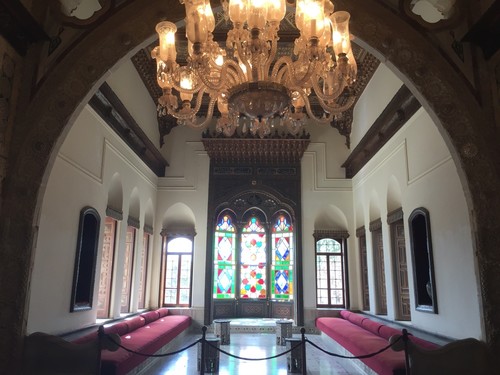 The interior of the Beiteddine Palace

While respect for Christianity and Judaism is specifically spelled out in Islamic texts as people "of the book," respect for other religions, including the Druze, was practiced by the Ottomans in their lands. The Druze Palace of Beiteddine carries the Ottoman Sultan's seal as a form of respect for the Caliph and his embrace of this freedom of religion. The Ottomans allowed the minority Druze to retain power in much of what is now Lebanon and gave the Druze near full administrative control. The various Christian factions were also given guarantees of freedom of religion and when the Druze and Christians occasionally fought, the Ottomans stepped in to guarantee peace. The Ottoman tenure was hardly without conflict, and while sporadic battles did ensue between the various religious factions, including among various Christian groups, there was relative stability. Compared to the last century, Lebanon under the Ottomans was peaceful.

I was surprised by many things in Lebanon but most by what I didn't see. I didn't see any divisions between regions or religions. There was no "entering Sunni region" signs or "welcome to Hezbollah controlled land" billboards. In fact, other than Lebanese army checkpoints, there were no signs of any other groups in the country. The only evidence I had of travelling into Hezbollah controlled areas were the occasional Iranian flag, pictures of Hezbollah leaders, and the one time I saw an image of Ayatollah Khomeini on the outskirts of Tyre. In the north I was surprised to see pictures of Saudi Crown Prince Mohammed bin Salman along with a who's who of Arab leaders but walking throughout the cities I visited I couldn't tell if I was in a "Christian city" or a Shiite or Sunni Muslim one. The people and cultures all blend in seamlessly and to an outsider it is all just Lebanon.

Perhaps one of the major causes for sectarian violence in the country is rooted in the way the Western colonial powers left Lebanon. The legacy of the French is one not of Democracy but of very anti-democratic practices. The President of Lebanon, for example, must be, by law, a Christian. Despite the fact that Christians are a minority in the country now, they are guaranteed the Presidency. Similarly the Prime Minister must be a Sunni Muslim. There are further specifications for which government position will be filled by a member of a religious group but you can immediately see how this would cause problems for all groups in the country. The Shiites are probably the largest single religious group now, however, they are denied the top two positions by the Lebanese constitution. This was probably a major factor in Hezbollah riling up support from the Shiites in arming themselves and gaining support from their Iranian Shiite brethren. Why not have free and fair elections in which all offices are open to people of any religion? This may be a very simplistic and naïve approach to Lebanese politics but the current system is anything but "democratic." Invasion by Syria and occasional wars with Israel have only added to the troubles of the people of Lebanon.

Lebanon is made up of a little more than fifty percent Muslims-with the Shiites slightly outnumbering the Sunnis - and a little less than fifty percent Christians. The Druze make up less than five percent of the population but have always been well organized and united, making them the go-to group for administrative roles. The Christians, however, are made up of at least 5 different sects divided along ethnic and denominational lines making each group less powerful individually. Taking a census is banned by Lebanese law making it nearly impossible to know the current demographics of the country and this is by design. If a census reveals the demographics have changed the people will no longer accept the current religious requirements for government offices. This might lead to further conflict and ultimately another civil war.

The Ottoman Turks were able to be pragmatic in their approach in allowing for the various religious groups to share in governing Lebanon. The fact that the Turks were not Arabs and gave most administrative controls to the non-Muslim minority Druze showed their intentions were not motivated by ideology but by sustaining peace in the region.

In these times of armed conflict along ethnic and religious lines in the Middle East, perhaps its best to study the last working model for relative peace and prosperity in the region for the sake of the future of the region. Removing religious prerequisites for office while guaranteeing proportional representation and rights for minorities is the obvious solution, implementation, however, will undoubtedly be far more difficult.