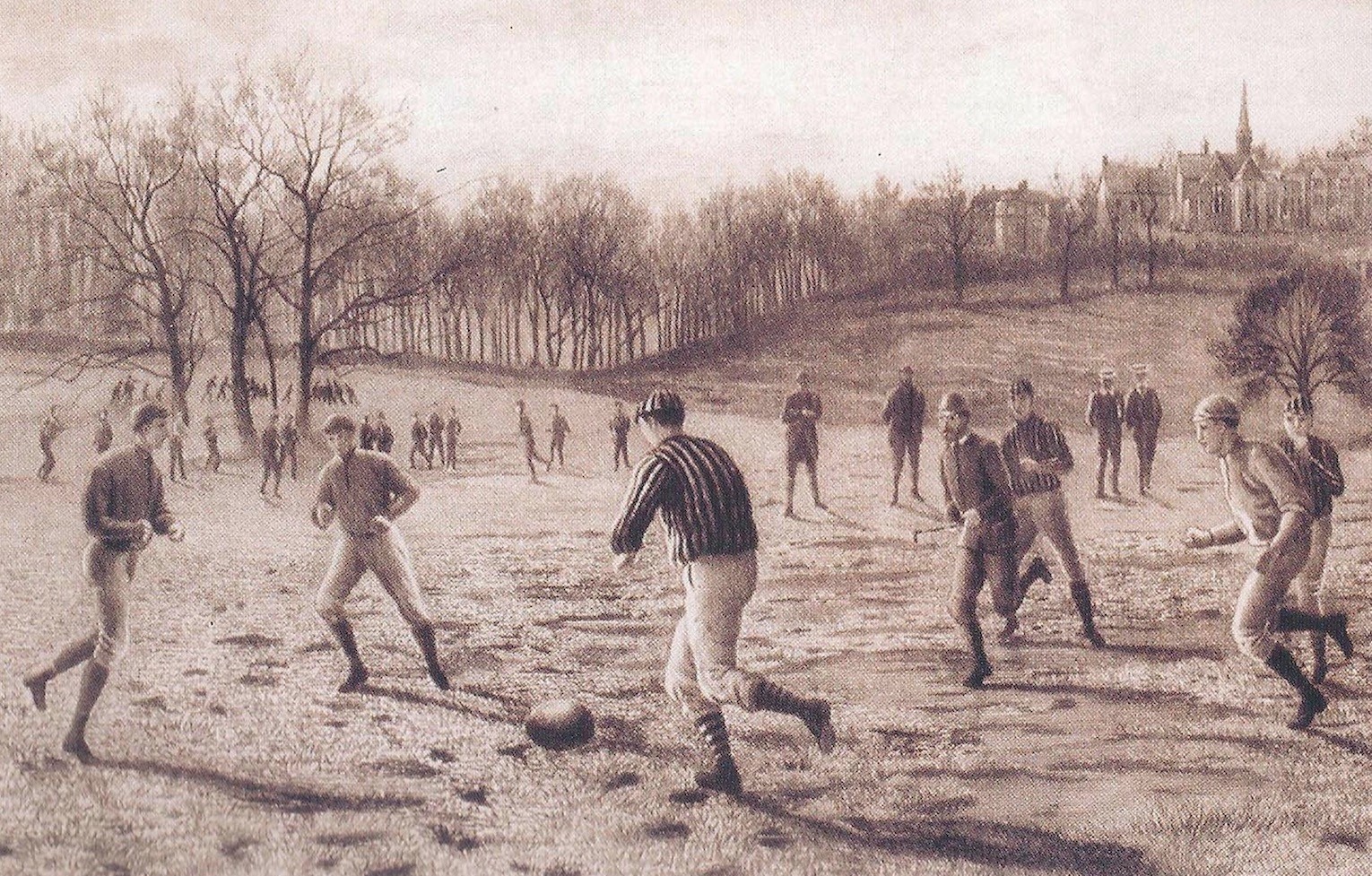 A drawing of people playing football in 19th century England by an anonymous artists.
by Erhan Afyoncu Apr 02, 2018 12:00 am

Football, perhaps the world's most popular sport, started its journey in Anatolia under the Ottoman Empire toward the end of the 1880s and eventually became an indispensable part of our lives

According to historical accounts, China was the birthplace of football, just like other important inventions like gunpowder and the printing press. Football, however, was played without any specific rules. The first matches were played between the residents of two villages, who were struggling in the fields, laying into each other and even demolishing houses, without any limit in the number of players. But modern football or football as we know it is credited to the English, who wrote down the official rules for the first time in history.

Football in the Ottoman Empire started off toward the last quarter of the 19th century. It was brought to the Ottoman lands by foreigners, with first football matches played in cities like İzmir and Thessaloniki. The La Fontaine Family from İzmir founded the "Bournabat Football and Rugby Club" together with other English families residing in the city. 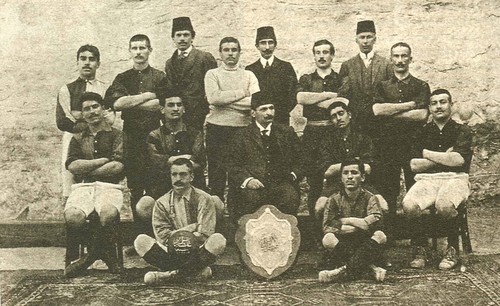 James La Fontaine, who introduced football in İzmir, moved to Istanbul in 1889. Football started to become popular in Istanbul in the late 1880s. Expats and non-Muslim Ottoman citizens played football in the city's Kadıköy and Moda districts.

Kuşdili Prairie found a place of Turkey's largest football clubs, Fenerbahçe was among the locations in Istanbul where football was played for the first time. Expats and non-Muslim Ottoman citizens used to go to Kuşdili or other meadows in Istanbul on weekends to have fun and play football. However, any action regarding football was kept under observation during the reign of Sultan Abdülhamid II. Ottoman securities would always track the conditions of football players and even follow them.

Expats from different nations, especially from England, played football at several places on the Anatolian side of Istanbul. Kuşdili, Göksu and Küçüksu were among the places most preferred for football matches.

Historical reports suggest that the then Ottoman authorities were disturbed by the crowd at a football game. The Üsküdar Governorship followed people who played football and reported on them to the center. Ottoman authorities described the game as being "played with a ball made of a tire in an encircled area with two doors at two ends."

Residents of Kandilli, Tarabya, Bebek, Beyoğlu, Kadıköy and Moda, staff of the English Embassy and students at the city's English, Italian, French and Greek schools also used to play football. Expats playing this sport considered it a way of entertainment and therefore went to matches with their families. They would have fun and do exercise at the same time.

A report dated July 10, 1897, describes the football craze as such: "Banker Monsieur Duka Dipkali and banker Monsieur Edvar, who are residents in Kadıköy, and some other 100 people, both male and female went to Göksu by a steamboat this Saturday. They had a picnic and played football there. As the crowd was quite large, the police were keeping an eye on the group. They said that they want to come to Göksu every Saturday just like they did this time."

In the early days of football in the Ottoman Empire Turks were not really interested in the game. They started playing it through the end of the 1890s. In 1901, Reşat Danyal, Fuad Hüsnü and their friends founded the Black Stocking Football Club. They gave an English name to their club as they thought Turks' playing football would not be taken kindly.

However, the Black Stocking club dissolved without making any mark on Turkish football. In 1905, the students at Mekteb-i Sultani (present-day Galatasaray High School) founded Galatasaray, the first Turkish football club, with the leadership of Ali Sami Yen. In 1907, the youth of Kadıköy formed Fenerbahçe Sports Club. The Istanbul Football League kicked off in 1904. Galatasaray joined the league for the first time in the 1906-07 season and Fenerbahçe followed in 1909-10.

Beşiktaş, which was founded as a gymnastics club in 1903, started to concentrate on football after 1910. With the big three joining the Istanbul League, a growing competition and indispensable passion for football slowly emerged in Turkey.

Matches watched by the police

The first document on football in the Ottoman archives is a police report dated Nov. 23, 1890.

"Around 20-25 English youth, under the supervision of the sons of Monsieur Witek, a Moda resident, gathered at Kuşdili and played with a ball made of a tire in an encircled area. The play area had two doors at both ends. This incident was investigated and it was understood that they were playing charity matches for schools. After the game, those who won would donate the prize money to schools. The English will do exercises every Saturday until the final match is played. The Üsküdar Lieutenant Governorship is looking into when the real match will be played, how much money will be collected and which schools it will be given to. It is necessary to take precautions and report developments to the police so nothing improper happens."

One of the legendary figures in Turkish journalism, Burhan Felek tells how football, which was played by Istanbul's expats and non-Muslims, took the locals' attention.

"One day, Ziya Bay told us in a coffeehouse that some Englishmen were playing ball in Kuşdili. He said that we should go and watch Sunday. The next Sunday we went to the field. There were some thousands of people. Kuşdil was an open prairie. There was no entrance fee or ticket. However, the football field was surrounded by iron wires that had been stretched around piles located two meters away from the field. The first match was between Moda Club and Kadıköy Club. In the Moda Club, Bahriyeli (naval officer) Fuat Bey, who got famous with Fenerbahçe, took place. The four corners of the field were full of spectators. There were even people who rented phaetons to get a better view. This was my first meeting with football. The year was 1906."