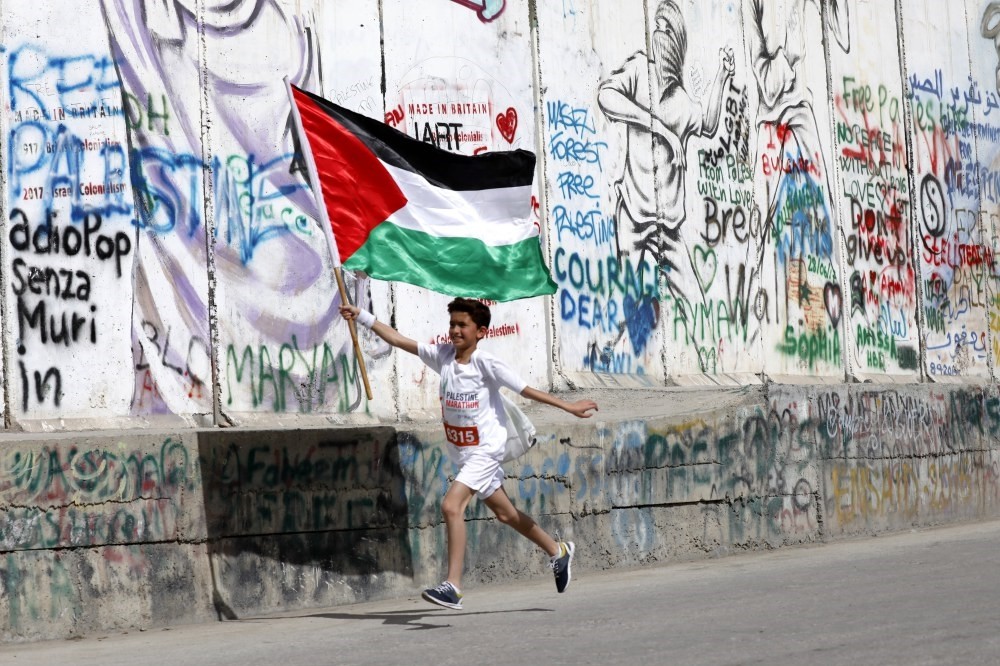 A child runs holding the Palestinian flag as he passes graffiti on the controversial Israeli separation barrier during the Palestine Marathon, Bethlehem, March, 2018.
by Fadi Zatari Apr 04, 2018 12:00 am

After their homeland was sacked starting from 1948, Palestinians have showed resistance both actively and passively, leading to steadfastness, which has become a pattern of life, endurance and resistance to Israeli policies

The consequence of the establishment of Israel on Palestinians lands in 1948 is known in Arabic as Nakba, i.e., catastrophe. The notion of Nakba is embedded in the massive destruction that the terrorist Zionist movement committed on Palestinians lands. For instance, not only were more than 530 Palestinians cities and villages entirely demolished by the Zionists but also hundreds of thousands of Palestinians were killed and expelled from their homes. Thus, Nakba still has a huge effect on Palestinians hearts and minds.

A comparable event occurred in 1967, known as "Naksa" or setback in English. Naksa also had a damaging effect, where not only the Palestinians lost new parts of their lands - the West Bank, Gaza Strip and east Jerusalem - but also parts of other Arab countries came under direct Israeli occupation, such as Sinai and the Golan Heights. Strictly speaking, Nakba and Naksa taught the Palestinians a few deep and difficult lessons, among which they learned that leaving Palestinians lands is not a viable alternative for the future.

Accordingly, Sumud is when the Israeli regime destroys your house and you stand up on the rubble of the house and say that this is my homeland, and it will be so forever. Sumud is also when the Israeli settlers burn the olive trees and then the Palestinians plant new one. The more the Zionists destroy the more the Palestinians people rebuild. Sumud is a very organized action, which reflects a common sense of standing against all kinds of the Israeli injustice and discrimination.

Furthermore, the conception of Sumud emphasizes the protection of the Palestinian identity, culture, tradition and custom to maintain their homeland as well as the continuation of the struggle against the Israeli occupation on Palestinians lands. This demonstrates how Sumud became a unique Palestinian national concept that contains different aspects of resistance and self‑preservation against Israeli oppression and harassment. Thus, while the term can be translated literally into English as steadfastness, a more accurate explanation is staying strong in all possible ways; even in the face of Israeli unfairness and injustice and to maintain the self and the land.

As a typical method of colonial powers, the Israeli regime tries to make Palestinian people feel that they are weak, alone, isolated and not capable of struggling or even standing up against them. However, Sumud as a practical ethical term aims to resist and challenge Israeli attempts to deconstruct the minds and hearts of Palestinians. Meaning, Sumud as a way of resistance focuses to preserve the self in the present to open up new horizons, perspectives and hopes in the future for self-determination, liberty and equality.

Both resistance and Sumud, in Palestinians culture, are to some extent analogous. Still resistance is more related to military activities against the Israeli occupation; however, Sumud is the structure and framework in which these military as well as non-military activities are organized. Moreover, Sumud has psychological aspects of being determined and confidence not to lose again so that Nakba and Naksa do not repeat again. Furthermore, Sumud is a style of life and ethical responsibility, in which individual sacrifices himself tirelessly. In other words, Sumud is to give up what you love and in the meantime to embrace patience for coming pain, this is all for the sake of the homeland as well as for others.

Practically, as a realistic way of life, Sumud presents a form of social solidarity and coherence against injustice and oppression, which can be a model for emancipation for other nations who suffer persecution in the world. Also, on the theoretical level Sumud can be theorized as a model and symbol of resistance against colonization, hegemony and suppression, and as means to achieve self‑determination, freedom and justice.

In a time when the Israeli regime restricts every single aspect of Palestinian freedom and liberty, Sumud presents a solution as a way of surviving in the struggle against the Israeli colonization and hegemony. In my view, there are two levels of Sumud, on the one hand, individual Sumud, where individuals stand up as one person against the whole Israeli apartheid, sacrificing himself for the sake of others.

On the other hand, collective Sumud, organized resistance and fighting Israeli injustice. Both individual and collective Sumud, as a rejection of injustice, came through a collective awareness and moral responsibility that necessitates self‑devotion to bring justice not only to Palestinians, but also to humanity as a whole. For these reasons, Sumud became a symbol and a metaphorical expression of the olive tree among Palestinians. Sumud has deep and well-establish roots in the land, reflecting the Palestinians people in Palestine.