Ghosts of Catalans' past in Iberian Peninsula 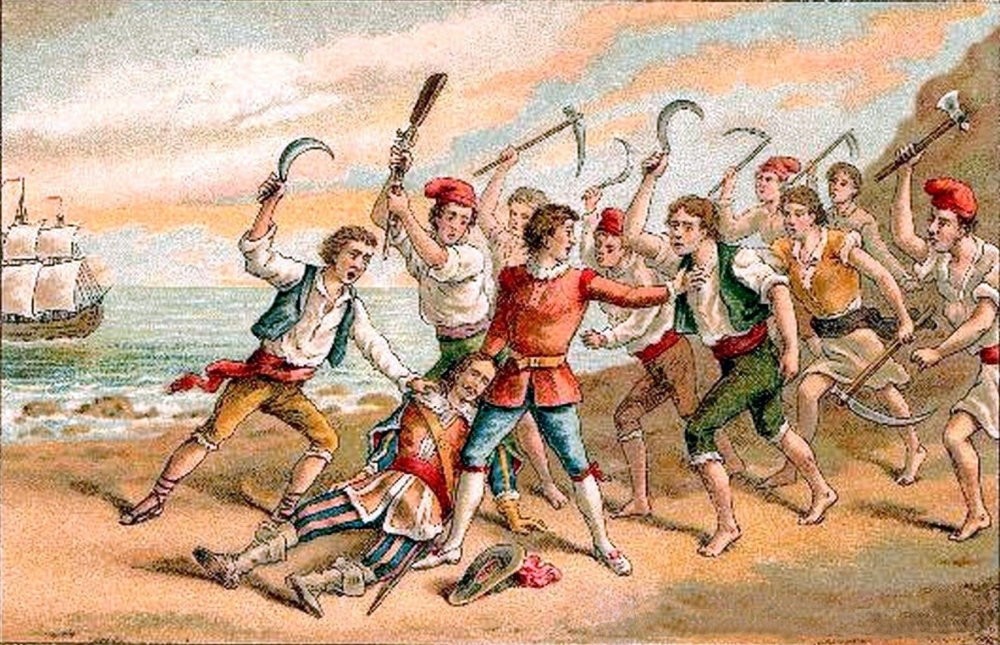 A painting by an anonymous artist of the Catalan revolt in the 17th century. Catalans were backed by the French and revolted against the Spanish crown.
by Erhan Afyoncu Apr 13, 2018 12:00 am

Catalans lost their principality when the Crown of Aragon, established in the 11th century, united with the Crown of Castile in the 15th century, but revolted for independence in 1640, and regaining their autonomy in 1659, which ended on Sept. 11, 1714

Spain is a country that shares the Iberian Peninsula with Portuguese. The Spanish are generally Latin and Catholic. Besides for this, there are different minorities and ethnic groups in the country since the region was exposed to many invasions and migrations throughout history. The common opinion about the meaning of Spain is that the word is derived from the Iberian language and comes from Hisplais, which means the city of the western world.

After Romans defeated Carthaginians in the second Punic Wars, they progressively conquered the Iberian Peninsula. When Rome weakened, Spain was exposed to the invasions of German tribes. These German tribes socialized with the local Latin people and adopt their customs and traditions.

In 711, Umayyads conquered the whole Spain in five years with Islamic armies under the leadership of Tarık Bin Ziyad. Therefore, the Islamic domination, which will continue until 1492, started in the region. The only ones who can resist against these conquests were Galicians on the Northwestern part of the Iberian Peninsula. The Kingdom of Asturias was established in the region after the Battle of Covadonga. Later, the Kingdom of Leon was founded as the continuation of the Kingdom of Asturias.

The Crown of Castile was a state that appeared together with the Kingdom of Leon. This state, which means fortress and using this figure in its coat of arms, was in the center of Spain and fought against the Umayyad Muslims together with the Kingdom of Leon in this war. In the period of Alfonso VII, who became the king in 1126, most of the Christian states in Spain united under the roof of Castile. The only aim was Reconquista, which is the name of the wars that Christians made to take the country from Muslims in this period.

The Crown of Aragon, which was seen as the pioneer of Catalonia, emerged in the 11th century. The flag of the state was comprised of yellow and red lines, and it is the root of the flags that Catalan and Valencia communities use today. One of the four flags in the coat of arms of Spain is again this Aragon flag today. In 1469, Fernando II, the Aragon king, and Isabella I, the Queen of Castile, married to throw Muslims away from Spain. The throne of Spain was united with this marriage. In 1492, they conquered Granada in 1492 and put an end the existence of Muslims on the Iberian peninsula. In this period, Christopher Colombus discovered America.

In the period of Charles V, who inherited the throne in the 16th century, Spain became one of the most important states in the world. However, it lost its previous power in the 17th century. In the Thirty Years' War, the French armies defeated the Spanish. A great agricultural revolt supported by France broke out in the Catalan region starting from 1640. On Jan. 16, 1641, a Catalan Republic was established under the leadership of Pau Claris i Casademunt, who is a Catalan attorney, and continued until 1652. With the Treaty of the Pyrenees, which was signed in 1659, Catalans got special rights. While the region where Roussillon and Vallespir are located was left to France as North Catalonia, South Catalonia was under the domination of Spain. The importance of this treaty for Catalans was that the historical borders of the country were determined.

The issue of Catalonia revived again at the beginnings of the 18th century with the War of the Spanish Succession. Catalans, who struggle with Austrians against the power of Felipe V gave Barcelona to him on Sept. 11, 1714, after the Treaty of Utrecht in 1713. This was both the end of the War of the Spanish Succession and the self-government of Catalans.

After King Amadeo abdicated in Spain in 1873, the country had a big crisis. Some federal republicans established a republic under the leadership of Estanislao. A part of this federal republic was Catalonia. Baldomer Pastau i Plat was at the head of the Catalan Republic. However, the lives of the Spanish Republic and Catalan Federal Republic were short. In 1874, the House of Bourbon created the kingdom again.

During the Spanish Civil War between 1936 and 1939, Catalonia was one the most important issues of the war. In 1931, the republic was established with an end of the military government and kingdom. Later, a civil war between Republicans and Nationalists broke out. Catalonia was the fortress of the Republicans in this war.

With General Franco, who took over the government after the civil war, the Catalonian period of self-government came to its end. Spain turned into a centralist state. After the death of Franco, 17 regional administrations were established even if the new constitution was technically unitary in 1978, and a large autonomy was given to Catalonia with the name of Generalitat de Catalunya. Today, Catalans do not favor autonomy and want independence.