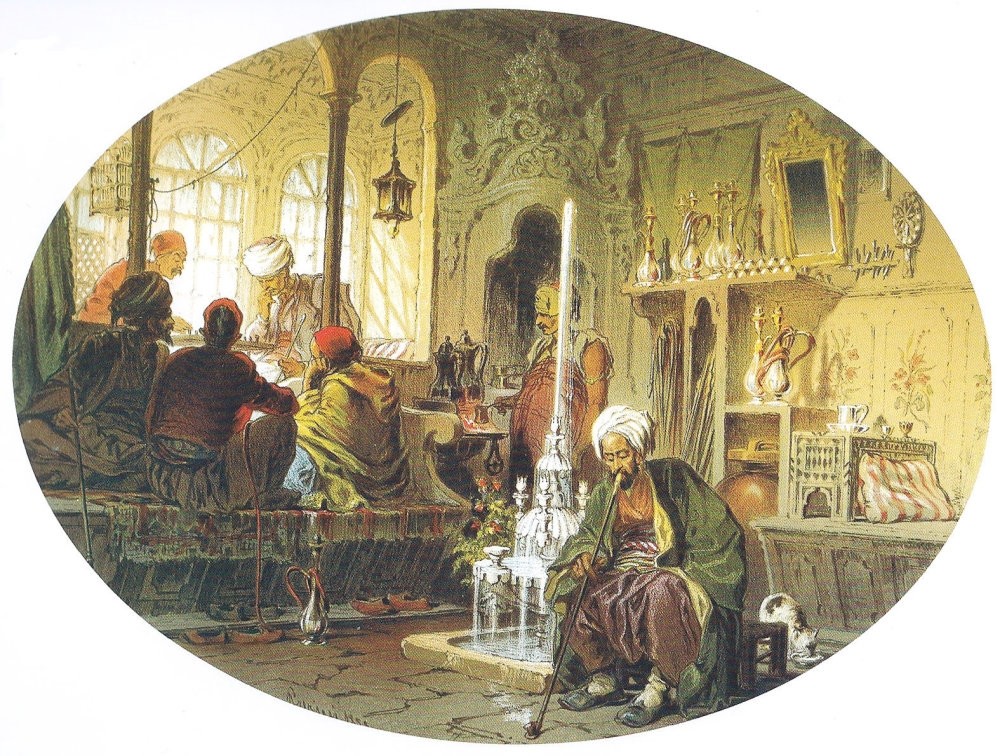 An illustration of a coffee house, where people would meet to drink tea or coffee and smoke hookah.
by Erhan Afyoncu May 03, 2018 12:00 am

The Ottomans were introduced to tea, the most important beverage in Turkish daily life, about 140 years ago. During the reign of Abdülhamid II, tea was planted on all sides of the empire from Bursa to Aleppo, from Aydın to Erzurum, but it did not hold

Lately, there has been an increase in the number of eating and drinking festivals. Tea, which is the most important part of Turkish daily life, has been considered a part of Turkish drink culture for centuries. However, we were introduced to tea only about 140 years ago. With his archive-based research on the arrival of tea in Turkey, Kemalettin Kuzucu shed light on this issue and changed what had been known about the history of tea in Turkey.

In the Ottoman era, tea leaves had been found since the 16th century. However, tea was initially used by a very few people and mostly in perfumeries. After the declaration of Tanzimat in 1839, tea gradually began to appear on breakfast tables. Tea agriculture began during the reign of Sultan Abdülhamid II when modernization began in every field and an effort was made to shift agriculture to the European style. On one side, efforts were being made to boost the yield of traditional agricultural products while on the other newer crops were being tried. Tea was one of these products. Tea seeds and saplings, imported from the Far East were planted and cultivated in the fields of Istanbul, Bursa and Thessaloniki.

Tea was first grown in Turkey by farmers in the northeastern city of Artvin in the late 1870s. According to Kuzucu's research, tea plantations were successful in Hopa and Arhavi in 1878. Tea became more available after Turks who went to Russia for work, planted seedlings they had brought with themselves. As soon as growing tea became a profitable business, the state levied a tax on tea. As farmers complained about the new tax, the governor of Trabzon, Yusuf Ziya Pasha, joined their call and said that tea production was to be encouraged not levied. The taxes were eventually abolished upon the governor's call. 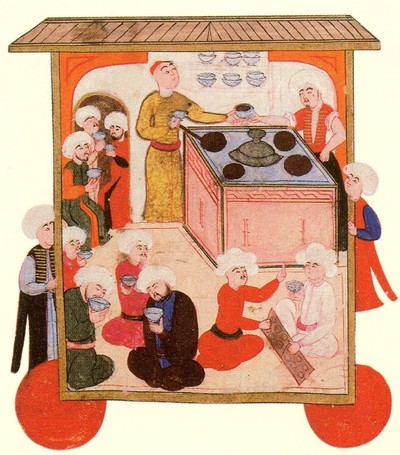 A miniature drawing of an Ottoman coffee house in the 16th century. Coffee was the main beverage of choice in the Ottoman Empire before tea was introduced.

While these developments took place in the eastern Black Sea region, the Ottoman government imported tea seeds and saplings from the Far East and tried to develop tea plantations.

At the end of the 1880s, tea saplings from Japan were planted in Bursa, under the watch of its Governor İsmail Pasha. Since Bursa's climate was not suitable for tea, the attempts failed.

In 1894, they tried to grow tea in Istanbul and this attempt also remained inconclusive. The Ottoman government studied the land and the climate in the tea-growing provinces due to a lack of success in growing tea. A formal report was prepared and a second attempt was made in 1894 by the order of Abdülhamid II.

Tea seedlings and seeds were ordered from Japan. The tea species grown in Turkey were examined. Instructions were issued for the cultivation and care of tea. Followed by attempts to grow tea on all sides of the empire.

Tea plantations sprung up in Erzurum, Sivas, Ankara, Bursa, Aydın, Adana, Aleppo and Istanbul. However, these attempts also failed due to the unfavorable climate in these cities. Interestingly, although tea was being grown in the Eastern Black Sea region, no attempts were made to boost production there.

Abdülhamid II gave importance to the production of tea and closely followed all developments related to the subject. In 1896, Yusuf from Bukhara collected and processed tea leaves grown in Trabzon while still in the form of young sprouts and obtained white tea and gave it to the Sultan. Abdülhamid II was quite pleased with the gift and decided to examine tea plantations in and around Trabzon. He also invited a Dutch expert named Hobbis, who wrote a number books on tea and coffee plantations, to the court and rewarded him.

Hulusi Karadeniz was the person who brought tea to Rize. He was the head of the Rize Chamber of Agriculture in 1910. Hulusi Bey brought tea seeds in 1912 because the climate of Batum and Rize, which were under Russian occupation, were similar. Seeds planted in his garden shortly sprouted. However, the Ottoman Empire's decision to join World War I left this attempt unsuccessful. Upon the occupation of Rize by Russians, Hulusi Bey emigrated. After the liberation of Rize, he returned to tea cultivation in 1919. Hulusi Bey, who took the surname "Karadeniz" after the foundation of the Republic, reported his tea experiences to the Ministry of Foreign Affairs and Ali Rıza Bey (Erten), one of the teachers in Halkalı Agricultural Academy. Ali Riza Bey prepared reports on tea. Their efforts inspired Zihni Derin, the founder of modern tea cultivation, and the tea politics of the Republican governments.

There is an interesting story behind the discovery of tea. In 2737 BC, while the Chinese Emperor Shen Nung was drinking water at the palace's garden, two green leaves fell into the emperor's cup. This situation was investigated due to the change in the taste of the water, and tea became an indispensable beverage. After the Chinese, the Japanese grew tea in the ninth century. In the 1800s, tea cultivation started on the island of Java, colonized then by the Dutch, and in North India, colonized by the British. Tea was grown in Ceylon in 1870 and in Batum in 1897.