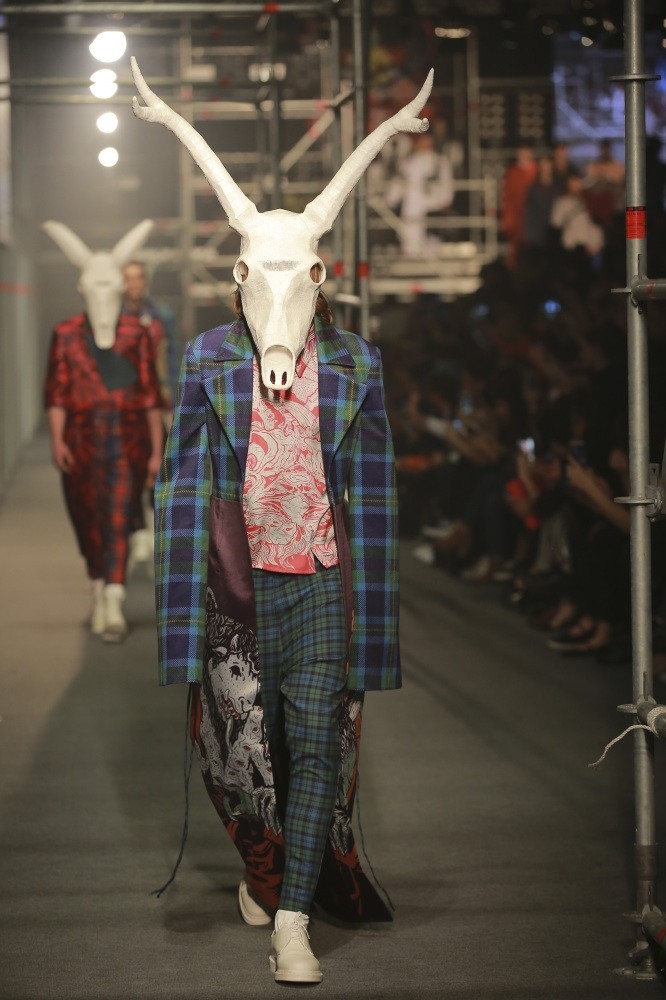 As one of the most dynamic industries, fashion never shies away from innovation and change. As a matter of fact, these two factors constitute the core of the industry, making it the brave and lively sector it is today. Thanks to these features, fashion is also one of the most welcoming industries for younger generations. It never hesitates to welcome fresh minds and incorporate them into the dynamism of the fashion world.

This is why young fashion enthusiasts are generally encouraged to think freely and creatively while contributing to the industry's future. This situation was quite clear in this year's Koza Young Fashion Designers Competition, one of the most important platforms in Turkey that introduces young fashion designers to the industry. The competition's gala was held Wednesday, May 2 with an outstanding fashion show featuring 10 young designers.

Organized for 26 years now, the Koza Young Fashion Designers Competition actually acts as a bridge between the industry and young fashion designers and never fails to reveal young talent. The competition this year had 240 finalists, some of who are actually considered to be the pillars of the fashion world in Turkey. Koza describes its aim as "discovering new and promising future young, creative Turkish fashion designers" and represents the development and history of the fashion industry in Turkey.

Wednesday night was a huge success and another contribution to the fashion world by the Koza competition which was in accordance with its history and aim. The talent of the finalists and the process that they went through to prepare their collections, which were definitely the products of creative minds, was impressive. Beyond the collections, the thought process behind those collections and to see where their inspiration came from was especially interesting.

The collection of Ezgi Karayel, for instance, was the well-deserved winner of the competition with her outstanding range of pieces. Her collection "Opposition / Savage-Neat" took its inspiration from the polar characteristics of mankind. She says her research initially began with Stanley Kubrick's masterpiece movie "A Clockwork Orange" released in 1971.

"In this movie, Alex [the main character] loves Beethoven, especially his Ninth Symphony. This music influences Alex's life. He dreams about very violence scenes while listening to it. Beethoven's music represents violence for him or is something that triggers violence in Alex's opinion," she said while describing her inspiration.

She added that when she compared Alex's relationship with Beethoven to what kind of music helps express violence today, which is heavy metal in her opinion, she found the collection she wanted to create.

Karayel further states that her collection consists of grotesque features, triggering the idea of collaboration and also the opposition that is triggered by different personalities within Alex himself, which she thinks reflects different eras of the British youth culture.

Thus, the collection came to life as a mixture of British youth culture and heavy metal music, with the influences of both clearly reflected in the fashion pieces that were created. It mostly consists of red Scotch plaid fabrics similar to tartan as well as a variety of fabrics that fell somewhere between brocade, damask and paisley. In addition to British youth culture and heavy metal music, it was also influenced by traditional Asian clothing with its kimono-style jackets. The jackets also had corset-like belts similar to obis, the belts used on kimonos.

Overall, the collection was creative without being too over the top which made it wearable and practical. As a matter of fact, one of the criteria of the jury, which consisted of several famous fashion designers and teachers, was that the clothes needed to be wearable, which, from my point of view, is quite crucial. The innovative feature of fashion is that it can easily go beyond the boundaries of realism and suddenly become something beautiful, creative but not practical since it cannot be incorporated in our daily lives. To be frank, some of the collections that were presented at the gala night were, although unquestionably beautiful, actually too creative to wear.

The top three contestants will get the chance to study fashion abroad and be enrolled in English language courses. In addition, the first place contestant will receive a cash prize of TL 20,000 ($4,750), while the second and third place winners will be awarded TL 15,000 and TL 10,000, respectively. All 10 finalists will receive one year memberships to the Fashion Designers Foundation and will be given the chance to join the Fashion Design and Management Graduate Program at the Istanbul Fashion Academy (‹MA). The finalists also will have the chance to visit an international fashion exposition.