A Korean orphan girl and a Turkish soldier: The unlikely father-daughter story 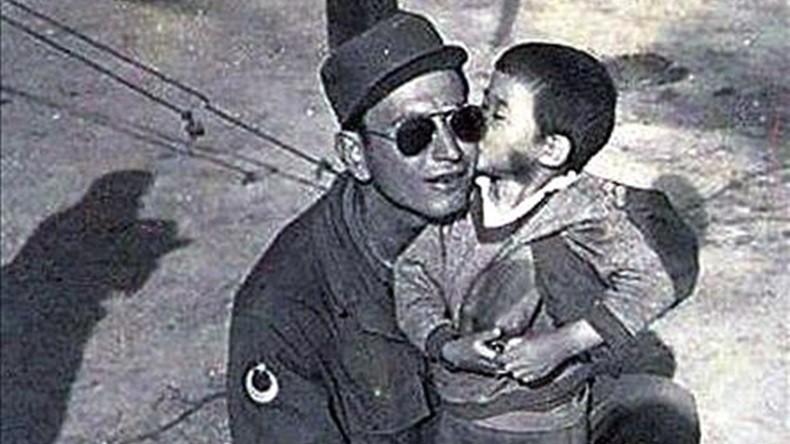 Ayla kisses Sergeant Su00fcleyman Dilbirliu011fi while Turkish troops were in South Korea during the Korean War.
by Miraç Tapan May 05, 2018 12:00 am

The Story of a small Korean girl and a Turkish soldier during the Korean War, who were once again reunited almost 60 years later, melted the hearts of millions and now as a 72-year-old woman, the orphan girl is still the sweetheart of the Turkish people

In a country touched with the fire of war, a five-year-old girl cringed with cold, checking her surroundings, her eyes squinting with fear. It was the winter of 1950 when the temperature dropped as low as minus 35 degrees. The girl, who was wearing nothing but tattered clothes, was crying so loud that her lungs were about to burst. In the darkest hour of her very short life, this small girl was found by a young Turkish soldier who took this little Korean girl under his wings after learning that her entire family had been killed.

Although a war zone and a military headquarters with thousands of soldiers was not a perfect place to raise a little girl, Süleyman gave all he had to make the girl feel at home and became a father to her. The little Korean girl Süleyman found was Ayla whom he lost for almost 60 years.

Between 1950 and 1953, the Korean Peninsula lived through one of the deadliest times of its history. On June 25, 1950, the war began when some 75,000 soldiers from the North Korean People's Army poured across the border between the Soviet-backed Democratic People's Republic of Korea to the north and the pro-Western Republic of Korea to the south. In a split second, the entire Korean Peninsula turned into a playground for both parties in the Cold War.

Before the end of the week, the United Nations made a call for military aid to South Korea, and Turkey was the second country to answer the U.N. call, after the U.S.

The Turkish Brigade, a Turkish Army Infantry Brigade, headed to South Korea to help South Koreans keep their home intact. However, Sergeant Süleyman, a 25-year-old Turkish soldier, probably never thought that his life would change forever when he volunteered to go to South Korea.

On that fateful day when Süleyman's life and heart changed forever, his battalion was fighting the enemy in the dead of night. After the heat of the fight was cooling down, Turkish soldiers saw movement between the bushes behind them. Thinking that the enemy was hiding, all soldiers turned their guns to the bushes; however, it was Sergeant Süleyman who was courageous enough to walk to the bushes to face the enemy. Indeed, there was someone hiding in the bushes, but it was not the enemy: It was a girl who was scared, crying her lungs out. Süleyman picked her up and hugged the girl to make her feel safe. The girl had no identity, no home or any family left alive. Süleyman could not leave her there; he had no choice but to take her with him. Turkish soldiers embraced the girl. They looked after her and found her clothes. She was the joy and mascot of the entire brigade. Not only Süleyman who was like a father to her but the entire military camp became her family. Soon, Süleyman named her "Ayla" (Halo) as her face was shining under the full moon when he found her.

Being a clever girl, Ayla learned Turkish in a very short time, and she even began to help the soldiers translate. For one-and-a-half years, Ayla and Süleyman became inseparable; however, every fairy tale comes to an end.

When the time came for Turkish soldiers to leave Korea and return home, Süleyman wanted to take Ayla with him, but it was not possible. With tears pouring down their faces, Süleyman and Ayla, who had been brought together by the war, were separated again by the same war. Süleyman left for Turkey, while Ayla was put in an orphanage, the Ankara School, which was founded the by Turkish government for orphaned Korean children to have an education.

For years, Süleyman always thought about Ayla. When South Korea sent a rescue team after the Gölcük Earthquake that hit Turkey in 1999, he hoped that Ayla would come and look for him. When the Turkish National Football Team was playing in the World Cup in South Korea in 2002, Süleyman gazed though the spectators on TV, hoping to catch a glimpse of Ayla, but he never could.

At the age of 85, Sergeant Süleyman Dilbirliği attended the reception held for the 60th anniversary of the Korean War. During the reception, Süleyman shared his story with fellow soldiers and Turkish and Korean officials. After hearing his story, a South Korean journalist started to investigate the story, and all government archives were scanned in detail. Unfortunately, the archives of the Ankara School were destroyed after the old building was demolished and a park was erected instead. A Korean TV channel tracked down the orphans and graduates of Ankara School, but nothing came up.

How Ayla was found

When it was thought that the hopes were shattered, a man claimed that his sister kept in touch with Ayla years after graduation, and her official name was Kim Eunja. When she was visited at her home, 65-year-old Ayla was shown the old photos and everything came back to her. In tears, Ayla said Süleyman was her hero.

After the discovery, the Korean government invited Süleyman to meet with Ayla, and in 2010, the long lost father and daughter hugged each other in the park at the Ankara School where Süleyman had to leave Ayla almost 60 years ago. All the retired sergeant could say was "It is over girl. I'm here."

They frequently wrote each other over the years, and Ayla referred to Dilbirliği as her father and his wife as her mother in her letters.

In 2017, the heart-warming story of Ayla and Turkish Sergeant Süleyman inspired the Turkish production "Ayla: The Daughter of War," which was selected as Turkey's official candidate for best foreign language film for the Oscars. Although the film did not make it to the short list, the story of a little Korean girl and a Turkish soldier warmed the hearts of millions around the world. 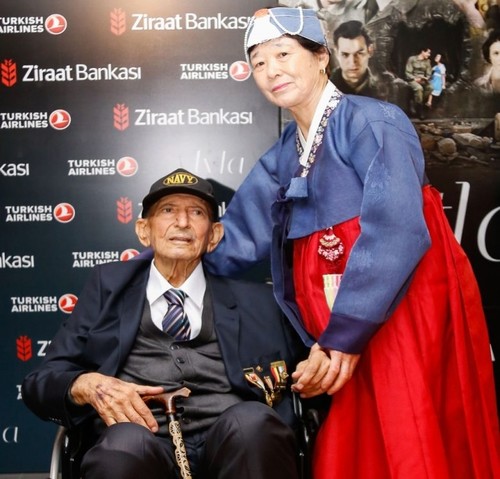 Retired Sergeant Dilbirliği poses with Ayla - Eunja Kim - at the premiere of the film that was inspired by their true story more than 60 years ago.

Throughout the promotion of the film, Ayla and Süleyman had the chance to meet a couple of times. However, their last reunion took place at the hospital where the Turkish war veteran was being treated for respiratory failure in Istanbul.

Süleyman could only gesture with his hands due to his frail health, while Kim burst into tears upon seeing the man she called "father" in his hospital bed. 91-year-old Süleyman and 71-year-old Ayla said goodbye to each other for the last time. Süleyman, who had been under treatment at the Haydarpaşa Numune Research and Training Hospital since Nov. 12, 2017 died of multiple organ failure on Dec. 7, 2017.

The sweetheart of a nation

Although Ayla lost her foster father, Ayla did not lose her touch with Turkey and the Turkish people: She became a part of Turkey.

On the last day of his official South Korea trip on May 3, President Recep Tayyip Erdoğan met 72-year old Ayla at the hotel where he was staying in Seoul.

Ayla - or Eunja Kim - currently lives in Korea with her children and grandchildren.