President Erdoğan - A patriot or a nationalist? 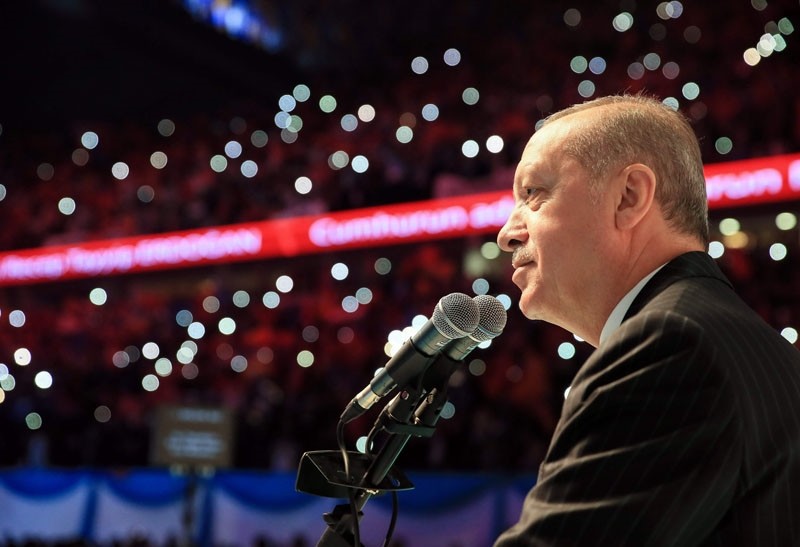 Election time is here once again; the drums are beating, trying to stir up polarization, nationalism and populist sentiments. But, as always, things in Turkey are not quite that straightforward or simple

George Orwell wrote that one should not confuse nationalism with patriotism. Orwell defined patriotism as "...devotion to a particular place and a particular way of life, which one believes to be the best in the world but has no wish to force on other people. Patriotism is of its nature defensive, both militarily and culturally."

On the other hand, Orwell continues: "Nationalism... is inseparable from the desire for power. The abiding purpose of every nationalist is to secure more power and more prestige, not for himself but for the nation or other unit in which he has chosen to sink his own individuality."

Patriotism means loving one's own culture, one's own country enough to defend it. A concrete demonstration of patriotism is how the Turks responded on the night of July 15, 2016.

Unfortunately, it is possible to see nationalism in the U.S. and in almost every European country. Build a wall to keep out immigrants, leave the Europe Union in order to send immigrants home, stand in lines at the border to keep refugees out, or even sink boats to prevent them landing on your shores. These actions all stem from nationalist sentiments.

Populism preys on nationalist sentiments. The fear of terrorism is somehow linked to refugees who are fleeing worn torn countries to find a safe life for their children. The refugee becomes a person to be feared, a person to be kept out. Today Muslim charities are under direct threat of being labeled as supporting terrorist groups; yet in reality all they are trying to do is to help refugees and foster understanding between communities. Such extreme responses are merely the end result of nationalism and populism gone mad.

But to lay all the blame at the door of the current leaders in Europe or America is an oversimplification of Western nationalist sentiments.

Former U.S. President Barrack Obama, seen by many to be the antithesis of President Donald Trump, used exceptionalism. He may not have wanted to "Make America Great Again," but he did say the following: "I want us to take up the unfinished business of perfecting our union, and building a better America ... Together, starting today, let us finish the work that needs to be done, and usher in a new birth of freedom on this Earth."

That is, he did not set out to make America great; President Obama had a humbler aim. He just wanted to make America better. He wanted to perfect the union. And by doing so, America, this exceptional nation, would usher in freedom on Earth. Perfection, greatness. At the end of the day, it all boils down to much the same thing. Of course there is a difference between Obama and Trump. The actions that Trump takes are far more extreme than any that Obama took or failed to take.

To turn back to Turkey, as the elections approach, many Western and Turkish commentators are calling out President Recep Tayyip Erdoğan for using nationalistic rhetoric. They are blaming him for driving polarization.

President Erdoğan is no less or more a politician than former President Obama. Both took on platforms that would help them get elected. Any politician who does not do so cannot really be called a politician, for surely the very impetus, the very nature of being a politician means trying to run the most successful campaign to be elected or re-elected.

But wait, you say. A politician should not drive forward nationalist sentiments or fuel flames of polarization just to be elected. This is not ethical. This is not right in a democratic climate.

Such a statement is absolutely true. But to understand the fact that Erdoğan is not actually nationalist in his approach, that he is far from fanning the flames of polarization, a little reminder of Turkey's past might be appropriate.

To bring these people into a new nation, certain commonalities were focused on. The new citizenship was problematic. A new language, the New Turkish, was created by changing the alphabet and introducing many new, more "European" words. Overnight scholars suddenly became illiterate; overnight religion was removed as a commonality, and efforts were made to make secularism the glue that bound the nation together. A new way of dress, with the hat law, accompanied by encouragement to abandon the veil, was introduced to bring the new nation together.

In time, these changes were imposed with greater and greater tyranny. Just 15 years ago, primary school children would draw pictures that celebrated Mustafa Kemal Atatürk's reforms. Lovingly they drew pictures of before and after. They would draw men with beards and ladies in full hijab, sitting looking dejected. In the next-door picture, clean shaven men wearing hats and ladies in mini-skirts would be reading books and looking happy. These children were only depicting what they were being taught. Beards and hijab (i.e. religion) equal ignorance and unhappiness. Modern dress (and thus no religion) means being informed and happy.

School children would recite every morning "I am Turkish, I am hard working I am honest." Outside nearly every school would be the quote from Atatürk "How happy is he who can call himself a Turk."

No one would say they were Kurdish, Georgian, Bulgarian... Until this century speaking Kurdish in public could only bring disapproval or even trouble upon you.

According to a recent report (https://www.americanprogress.org - Turkey's New Nationalism and Shifting Politics) there is now a new nationalism in town. This is Erdoğan's nationalism; it is "assertively Muslim, fiercely independent; distrusting of outsiders; and skeptical of other nations and global elites, which it perceives to hold Turkey back."

Ah, find me a nationalism that loves all other nations and opens its arms wide to them, welcoming them in.

The report goes on to state: "Although a considerable number of Turks believe Islam has a central role in their national identity, there's also wide support for Turkey to remain secular."   Interestingly enough, the report states that only 35 percent of AK Party want Islamic messages to be central. The remaining majority of the party believes that Turkey is a secular state.

It is true that Turks, as a whole, are not happy with the West right now. After the failed coup, the American support for the People's Protection Units (YPG) and the failure to extradite Gülen, such discontent should be of little surprise. Add to this the anti-Turkish rhetoric and actions during recent European elections, as well as the open support given to the PKK in these countries.

Ali Çınar, president of the Turkish Heritage Organization, stated: "Everybody in Turkey, both government and opposition, are sensitive about these two issues and they are in consensus. So it's wrong to see this as AK Party's cause."

In short, the nationalism that is evident today is not something unique to the AK Party, but rather is something which all parties, which all Turks have had instilled in them over the years.

And if one looks closely at how this "nationalism" plays out at the AK Party level, at the actual actions of Erdoğan's government, a rather different picture emerges.

Donald Trump backs up his rhetoric by banning certain nations from flying into America and by building walls (figuratively and literally).

Erdoğan backs up his rhetoric by taking in 3 million Syrian refugees, by giving them free health care, free education and financial support. Slowly, some of these refugees are being granted citizenship. One of the greatest stumbling blocks in the upcoming election is the anger of some Turkish voters at this influx of refugees. Ugly nationalism, or even racism, is prevalent in many areas. Many people will not vote for the AK Party or Erdoğan simply because they "let the Syrians in."

President Erdoğan meets this challenge by reminding the people that they are the Ansar - they are blessed because they are welcoming in people in need. The president reminds the Turkish people that the influx of a new nation, a new language, will only bring a richer culture and in time a more vibrant economy.

Domestically the Turkish nationalism represented by President Erdoğan takes in millions of people who have a different culture and a different language. A large amount of public spending is devoted to their integration.

On the international front, at the present time, Turkey is the largest donor of humanitarian aid in the world. By sending goods and funds to countries all over the world, without concern about the recipients' religious or national affiliations, Turkey has set an example for the rest of the globe.

Obama said that he wanted to perfect the union, and thus usher the birth of freedom on Earth. President Erdoğan is trying to steer the Turkish ship through the stormy geopolitical waters in which it is located, trying to maintain a balance between East and West, trying to keep the many different communities that make up Turkey happy, and also at the same time, he is reaching out a helping hand to the rest of the world.