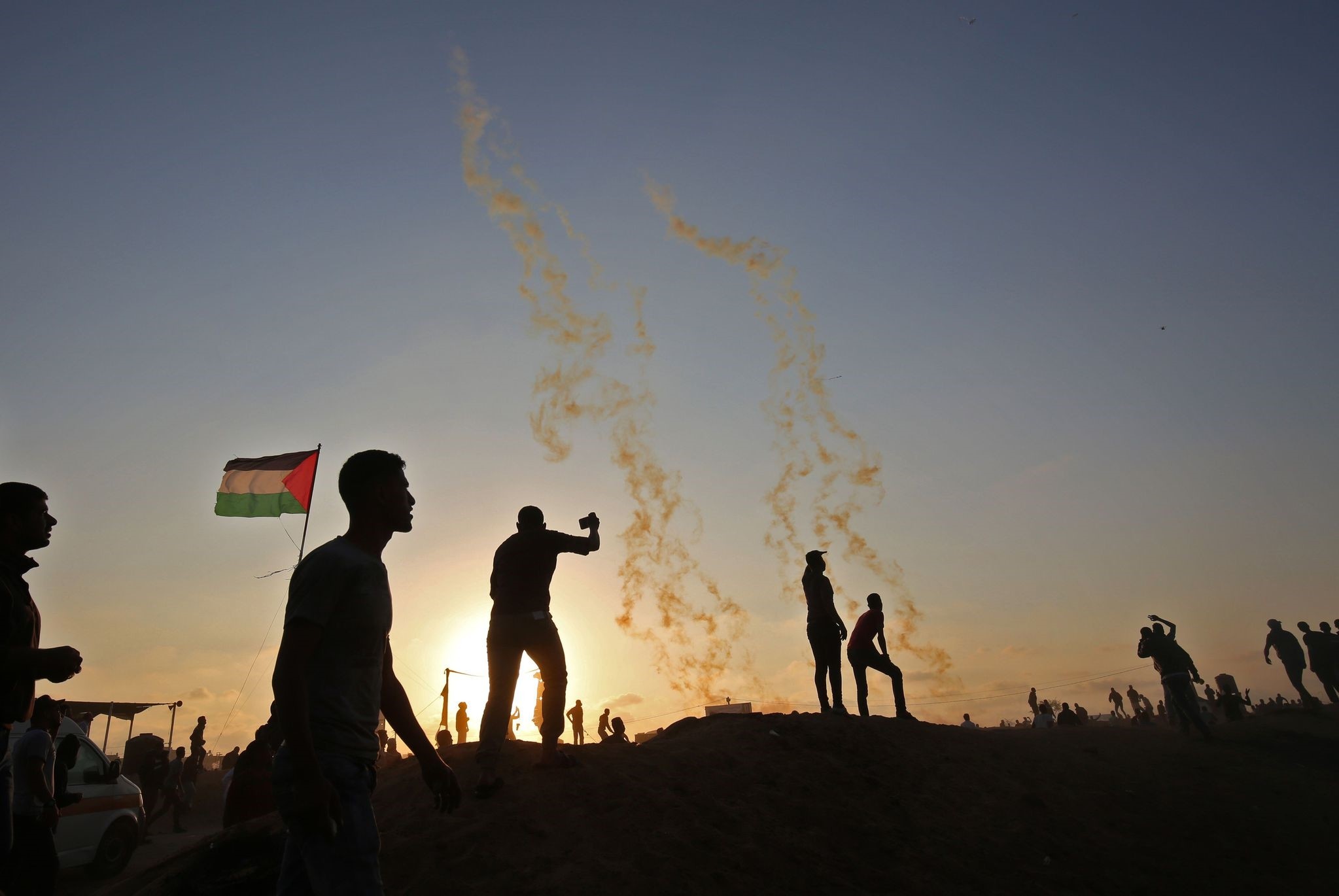 Palestinians protest as tear gas fumes erupt near the border with Israel in the southern Gaza Strip on May 15, marking 70th anniversary of Nakba.
by Jane Louise Kandur
May 19, 2018 12:00 am

Yesterday, a massive crowd turned out at Yenikapı to protest events in Jerusalem. The violence that erupted in response to the crass and cruel move of the U.S. embassy from Tel Aviv to Jerusalem took at least 60 Palestinian lives, leaving thousands injured

The date selected for the move of the American embassy to Jerusalem was not accidental. May 14 marks the 70th anniversary of the establishment of Israel (or as the Israelis refer to it as "Independence Day"); this is the date when the Israelis started driving the Palestinians from their lands and their homes.

Holiday or day of disaster, both May 14 and May 15 now have new connotations, new memories attached to them. The violent suppression of the Palestinian demonstrations, leading to at least 60 Palestinian deaths and thousands of Palestinians being injured, will now be associated with these dates; the insensitive, arrogant and antagonistic attitude that accompanied the move of the embassy will also go down in history. Rarely has an act that is not military in nature caused so much anguish, so many deaths and so much misery. 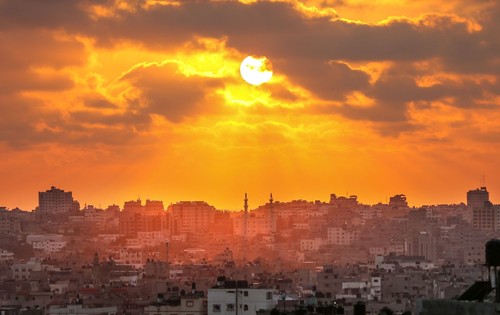 Sun is about to set over Gaza City on May 15.

A brief history of the city of Jerusalem and how it was administered and shared by all three major religions before the 20th century will highlight how atrocious Donald Trump and Benjamin Netanyahu's actions really are.

Jerusalem has a history that dates back to 4,000 B.C. - this date means that the city is one of the oldest places of human habitation. Jerusalem is considered to be holy by Christians, Jews and Muslims. King David, recognized by all three monotheistic religions, established the city and his son King Solomon, again a prophet recognized by all three religions, had the First Temple built in the city.

Jerusalem was conquered first by the Persians, and then by Alexander the Great; after changing hands a number of time, Rome installed Herod in the city. The city continued to change hands between the Roman Empire, the Byzantine Empire and the Sassanids.

In 638, the newly emerging Islamic Caliphate conquered Jerusalem. When the city was conquered, Patriarch Sophronius refused to hand the keys of the city over to the Muslim soldiers, demanding rather that their leader, Umar, come to the city.

When Umar received word that his presence was requested in the city he set out with one servant. He did not take a large entourage, but rather simply set out, alternating riding the sole mount (a donkey according to some sources, a camel according to others) and walking; he and his servant took turns riding.

When Umar arrived in Jerusalem, Sophronius welcomed him, and gave him the keys to the city. Umar was then taken to the Church of the Holy Sepulcher, and was told that he could pray there. Surprisingly, Umar refused. The reason he gave was that if he were to pray in the church it would set a precedent, and Muslims would take over the church, thus depriving the Christians of their holy site. Rather Umar prayed in an area across from the church; later the Masjid Umar was established in this new region.

But more important than this sensitive and open-minded approach to the city and its inhabitants, Umar drew up a treaty that set out the rights and privileges of the residents and the Muslims who would settle in the city. This was not something unique for Jerusalem; the Muslims drew up such treaties in every city they conquered.

"In the name of God, the Merciful, the Compassionate. This is the assurance of safety which the servant of God, Umar, the Commander of the Faithful, has given to the people of Jerusalem. He has given them an assurance of safety for themselves, for their property, their churches, their crosses, the sick and healthy of the city and for all the rituals which belong to their religion. Their churches will not be inhabited by Muslims and will not be destroyed. Neither they, nor the land on which they stand, nor their cross, nor their property will be damaged. They will not be forcibly converted. No Jew will live with them in Jerusalem. The people of Jerusalem must pay the taxes like the people of other cities and must expel the Byzantines and the robbers. Those of the people of Jerusalem, who want to leave with the Byzantines, take their property and abandon their churches and crosses will be safe until they reach their place of refuge. The villagers may remain in the city if they wish but must pay taxes like the citizens. Those who wish may go with the Byzantines and those who wish may return to their families. Nothing is to be taken from them before their harvest is reaped.

If they pay their taxes according to their obligations, then the conditions laid out in this letter are under the covenant of God, are the responsibility of His Prophet, of the caliphs and of the faithful."

The sentence "No Jews will live in Jerusalem" was put in on the insistence of the Christians. Later, under the Islamic Caliphate, Jews were allowed to return to the city. Umar allowed the Jewish population to worship at Temple Mount and the Wailing Wall.

The most important sentiment is perhaps: "Their churches will not be inhabited by Muslims and will not be destroyed. Neither they, nor the land on which they stand, nor their cross, nor their property will be damaged."

This is a very different attitude from that demonstrated by the Israelis today. The homes and lands of the Palestinians are taken away from them; the gradual but persistent growth of the settlements has left the Palestinians divided and powerless. The Palestinians are kept out of their most holy sites, including Masjid al-Aqsa, by armed Israeli soldiers.

Jerusalem came under the control of the Ottoman Empire in the early 16th century, remaining part of this empire until 1917.

After World War I, Great Britain took control of Jerusalem; in 1948 they gave it to the Zionists to establish their own state, Israel. Jerusalem was divided into West and East, with Israel controlling the Western city, and Jordan controlling East Jerusalem. In 1967, as a result of the Six-Day War, Israel took complete control over the city.

The actions of Israel against the Palestinians this week has caused outrage in the international community. There has been widespread international condemnation of the violence in Jerusalem.

In the past, no one really ever gave much credence to any of Nikki Haley's statements. But her statement that "No country in this chamber would act with more restraint than Israel has" is so divorced from reality that it leaves her former ridiculous statements in the shade.

In contrast to Haley, U.N. Secretary-General Antonio Guterres said that he is "profoundly alarmed and concerned by the sharp escalation of violence and the number of Palestinians killed and injured in the Gaza protests."

As happened on July 15, the Muslim world now has a cause on which it agrees and on which it can unite. As on July 15, there will be certain Middle Eastern governments who may not speak out. But of this we can be sure; as on July 15, when the people, the everyday Muslims on the street, were behind the Turks, these same people are now praying, discussing and acting in the name of the Palestinians.

Donald Trump has miscalculated again. Moving the embassy was a poorly thought-out strategy. To go ahead, and to time it for such a sensitive date is a greater miscalculation. Trump's poorly considered, badly thought-out strategy has given the Muslims of the world something to agree upon, something on which they can unite. Decades of trying to divide the Muslims, to keep them at loggerheads, may have finally come to an end.

Perhaps we may look back on the May 15, and say, "We have a lot to thank Trump for. If it hadn't been for him, the Muslim ummah would never have come together. Today, Muslims are uniting for Palestine. Thank you Mr. Trump."