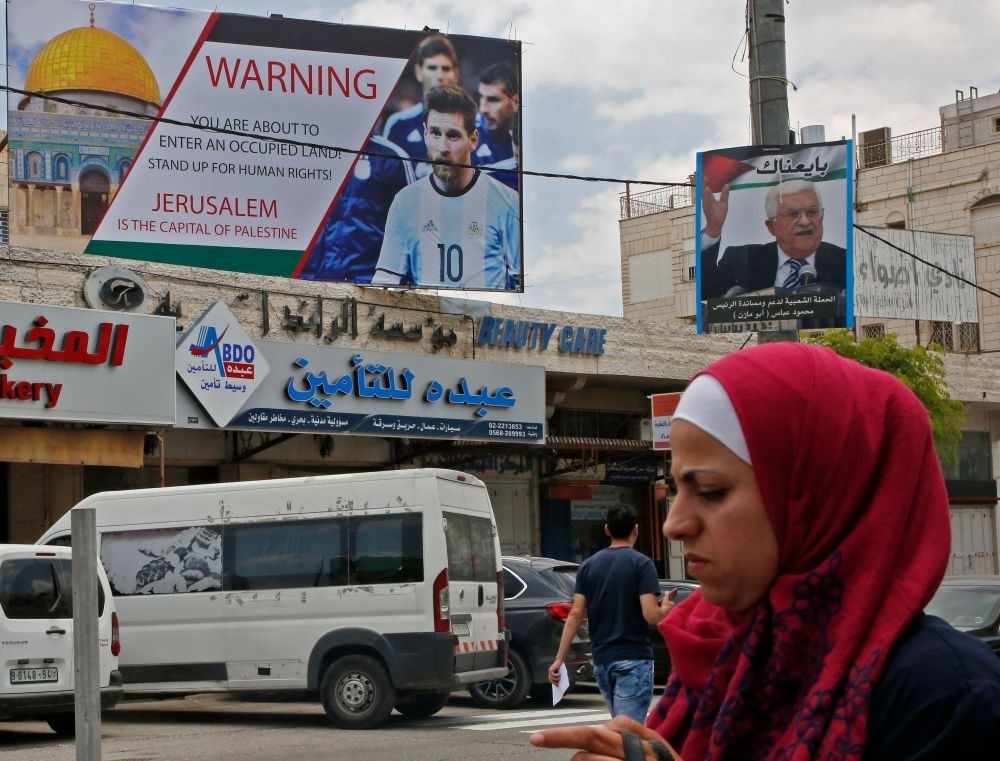 Poster erected on a main street in the West Bank town of Hebron denounces the planned friendly football match between Argentina and Israel and calls Argentina's star Lionel Messi (portrait) to boycott the match.
by Jane Louise Kandur Jun 09, 2018 12:00 am

Lionel Messi is an international superstar; he is a hero to young boys and girls all over the world but as of last Wednesday, he has become even more idolized in one particular country: Palestine

Football fever is rife. With the World Cup in Russia less than a week away, football is the subject of many conversations.

Israel is the kind of friend you don't call off a play-date with. We have all had such friends in school. Friends we play with because the consequences of NOT playing with them are greater than the misery of going ahead with the rendezvous.

But Argentina, headed up by the brave Lionel Messi, decided that it was not to be bullied into playing this match. And ever since the bullies have been doing their bullying.

The friendly match between Argentina and Israel originally was to be played in Haifa, Israel. But the Israeli government decided that to celebrate the 70th anniversary of the establishment of the Israeli state the match should be moved to Jerusalem.

Seriously, haven't we had enough of using Jerusalem to celebrate the establishment of the Israeli state? When Trump moved the American Embassy to commemorate this date, we all know what happened; how many deaths, how many injuries need to occur before Israel agrees to recognize that Jerusalem is Palestine? Merely playing a sports match here will not make the world suddenly concede that Jerusalem should be Israeli. I can think of no action that will convince the world that Jerusalem is Israeli, let alone the capital of Israel.

This decision to transfer the game from Haifa to Jerusalem spurred Jibril Rajoub, the chief of the Palestinian football association, to start a campaign against the match. He wrote a letter urging Argentina to call off the game.

After consulting with the players, the Argentine football association decided that it was best to cancel the game. Threats against the players and Messi were cited as the reasons, and statements were made to say that the decision was not political.

Israel can try to convince itself that Messi had been terrorized into refusing to come to Jerusalem to play against the Israeli team. They can try to convince the world that the Argentine football players were cowed by terrorists. And this they have been trying to do.

To this end, Defense Minister Avigdor Lieberman tweeted: "It's too bad the soccer knights of Argentina didn't withstand the pressure of the Israel-hating inciters, whose only goal is to impinge on our basic right to self-defense and bring about Israel's destruction. We will not yield to a pack of anti-Semitic terrorist supporters."

Miri Regev, Israeli Minister of Culture and Sport, said that the reason why the match had been cancelled was due to threats on Messi's life, his family and other members of the team. "The decision for cancellation is down to one reason, terrorism," she said. "This is not a BDS event. We are talking about serious threats."

In fact, when what the Argentinian players themselves say is examined, the Israeli claims of terrorism, undue pressure and scare tactics all come apart at the seams.

The fact that one of the people who lodged a protest with the Argentine club was Mohammed Khalil should not be overlooked. Khalil is a Palestinian footballer. He was shot in the leg on March 30, during protests over the right of refugees to return. Khalil said: "I call on the Argentinian team and especially captain Lionel Messi - because he is very popular in Palestine, particularly in the Gaza Strip - to stand in solidarity with Palestinians and to boycott the scheduled game with Israel, which is occupying our land."

Rajoub stated that the decision to cancel the friendly was in accordance with FIFA statutes and "according to their principles and mission to promote ethics and values, and to build a bridge between nations rather than being a tool for political ends." He added that it was the Israelis who had tried to use Messi and the Argentine team to legitimize their illegitimate claim to Jerusalem. 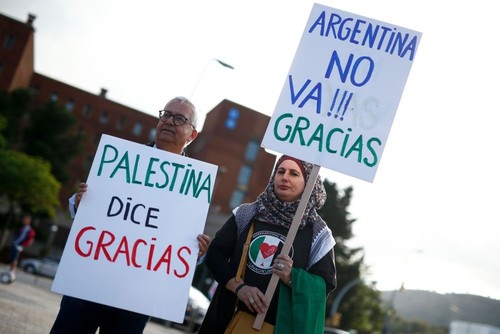 The vice president of the Argentine Football Association, Hugo Moyano, said that the friendly match between Israel and Argentina was "not worth it" and that he thought it was "a good thing" that the match was suspended because ""The stuff that happens in those places, where they kill so many people, as a human being you can't accept that in any way."

And Palestinians were even more outspoken in their pleasure at the decision. Ayman Odeh, the head of the Joint List of Arab parties (the political alliance of Arab-dominated parties in Israel) said: "Netanyahu's government may be gaining Trump, but it's losing the world. You can't just keep enjoying games while the rights of millions of Palestinians are being trampled. There's only one way to win - ending the occupation and a real peace treaty. It's still possible."

Haneen Zoabi, also a member of the Joint List, said, "Holding the match while soldiers butcher the citizens of Gaza is unseemly and may be seen as allowing it."

Yousef Jabareen of the Joint List said: "The right-wing government has to re

alize that it cannot crudely trample U.N. resolutions and the rules of the international court and expect the world to ignore it."

Omar Barghouti, co-founder of the BDS movement said, "Playing with an apartheid state is a form of complicity, magnified by Israel's recent horrific massacre in Gaza against unarmed protesters demanding their basic freedom, dignity and U.N.-stipulated refugee right of return." Barghouti said that Israel was involved in "sports-washing." That is, "...using international sporting events to cover up its war crimes and egregious human rights violations against Palestine."

There is no question that the move of the match from Haifa to Jerusalem was nothing less than political. The Israelis are using the soft power of sporting matches to legitimize their illegitimate claims. If there is any doubt about this, one needs only to consider the fact that the Israeli team has renamed themselves Beitar "Trump" Jerusalem, in honor of the U.S. Embassy move.

The Jewish Voice for Peace (JVP) has commented on how the boycott by the Argentinian team is the start of a fight against Israeli apartheid that will resemble the boycotting of South African apartheid. Describing the boycott of South Africa, JVP states: "It became impossible to ignore the need for the international community to step in and create the conditions for change. It became impossible not to see how you could use every lever of power you could to support the freedom struggle."

Lionel Messi has made his support for the Palestinian cause clear. This is what is upsetting the Israelis. He wrote on his Facebook page that: "As a father and a UNICEF Goodwill Ambassador, I am terribly saddened by the images coming from the conflict between Israel and Palestine, where violence has already claimed so many young lives and to injure countless children." He went on to say: "Children did not create this conflict, but they are paying the ultimate price," and urged: "This cycle of senseless violence must stop. We must reflect on the consequences of military conflicts and children must be protected."

The message, which appeared in both Arabic and English, was accompanied by the photo of a Palestinian child with a bandaged head.

Messi is one of the most popular players in Palestine, with many young boys and girls sporting his uniform.

In addition to numerous mini-Messis, one can find a number of mini-Ronaldos. Cristiano Ronaldo is another player who is extremely popular in the region. He is popular because he has openly stated his support for Palestine. In 2013 Ronaldo refused to change shirts with an Israeli player, thus demonstrating his support for Palestine. He also gave his Golden Boot Award to the Real Madrid foundation, which auctioned it to raise money to build schools in Palestine. Ronaldo was selected as the Character of the Year for Palestine.

There are a number of other celebrities and sports men and women who support the Palestinian cause. Perhaps the time for concerted efforts to boycott the cruel state of Israel has come. Certainly, with every passing day, more and more people, celebrities and otherwise, are standing up and saying, "Jerusalem is Palestine."