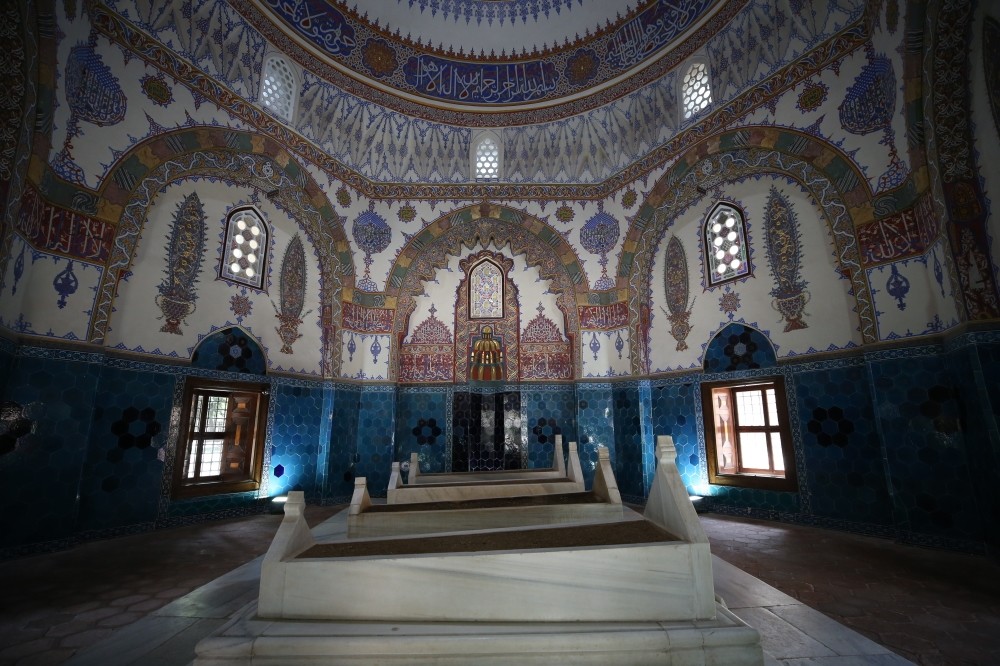 There are more than 50 tombs in the Muradiye Ku00fclliye (complex) which belong to the members of the Ottoman dynasty.
by Anadolu Agency Jun 09, 2018 12:00 am

The city of Bursa witnessed the rise of the Ottoman state which later become an empire that ruled three continents for centuries. Now with the Muradiye Külliye, the city gives visitors a chance to better understand the Ottomans and their spirituality

With its nature and rooted history, Bursa is one of the most visited touristic destinations in Turkey. Once the capital of the Ottoman Empire, the city offers a map of the Ottoman dynasty by outlining its foundations and early years.

Located in Bursa, the Muradiye Külliye, or social complex, hosts the tombs of Ottoman sultans and other members of the dynasty. The building provides visitors with a precious place where death and life, dreams and reality, sadness and peace are meld together.

The neighborhood of the complex was named after the construction and it is the last complex made per the order of the Ottoman sultans in Bursa.

Built per the order of the Ottoman Sultan Murad II, the sixth sultan of the Ottoman Empire who ruled between 1425 and 1426, the complex includes a mosque, a madrasah, a Turkish bath, a hospital and a tomb.

The complex features 12 tombs that are added to the complex during the reigns of Mehmed II, also known as Mehmed the Conqueror, Bayezid II and Suleiman I, known as Suleiman the Magnificent, as well as the graves of 40 members of the dynasty.

The complex's latest restoration revealed traces of 550-years of history and civilization, all of which reflects the simplicity and grace of the Ottoman spirit. The complex was referred to as the "Muradiye, the reward of perseverance" by Ahmet Hamdi Tanpınar in his poem "Time in Bursa" and is among the six components of the "Bursa and Cumalıkızık: Rising of the Ottoman Empire" world heritage area that was registered in UNESCO's World Heritage List in 2014.

People who visit the complex can rest both physically and spiritually among the flowers in the shadows of the sycamores and cypresses in its garden. Each visitor is affected differently by its unique features and spiritual atmosphere that encompasses not only a cemetery but also centuries of memories.

The Mosque of Murad II, which was built per order of Murad II between 1425 and 1426 with a reverse T layout, features İznik tiles, Edirnekari ceiling ornaments and a wooden gate crafted with the kündekari technique. The last sultan madrasah built in Bursa is located 40 meters west of the mosque. The madrasah is one of the most beautiful places in Bursa thanks to its ornate brickwork.

The complex also houses an open-air Gravestone Museum. Over the years, Ottoman gravestones from historical cemeteries and burial areas have slowly been transferred to the Muradiye Complex. An inventory of the stones was taken during the restoration. The stones have been translated into Turkish, and their dates and owners have also been determined. Typology works for these gravestones have also been conducted.

Though roughly preserved, the collected stones lacked a catalog and proper restoration. They have now been restored and placed in their original upright positions with extra care given to their integrity and condition.

During the restoration work for the Gravestones Museum, epitaphs of some structures thought to have been lost were found, as well. 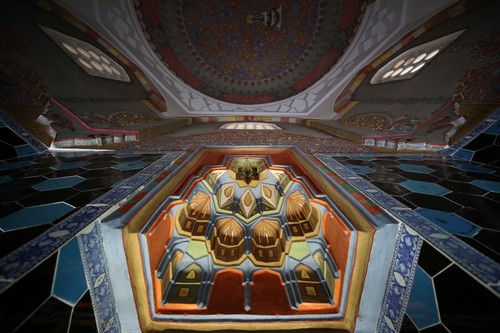 The colorful and detailed ceiling of the Muradiye Complex.

The tomb of Murad II is located on the southwestern section of the mosque, in the center of the Muradiye Complex.

According to Sultan Murad II's will, he was to be buried near the tomb of his son Alaaddin Ali. The sultan wanted to be buried directly in the soil. His will also stipulated that his tomb was to have four corners and its sides should be closed. He did not want anyone else to be buried near him. Historians believe that he also requested to be buried in Bursa on a Thursday, even if he died out of town.

With its square layout, the tomb of Murad II's walls were built from stone, brick, khorasan mortar, lead-plated domes and perfect eaves and constructed according to the instructions included in his will. The tomb is open to the elements, and the sultan's body was buried directly in the soil without a coffin or sarcophagus.

The graves of his two sons and daughter are in another room of the complex. Murad II, the first and last sultan to voluntarily renounce the throne, was the last Ottoman sultan buried in Bursa.

The historic complex welcomes people from every corner of the world.

Undergraduate Samet Özkan said he took his friends visiting from Kazakhstan to the Muradiye Complex. Saying that he visited the graves of Murad II and his sons and prayed, Özkan continued, "This place gives me peace. The tombs belong to very precious and spiritual people. The complex has a surreal atmosphere thanks to its beautiful trees." Another visitor, Aida Bolis from Kazakhstan who traveled to Turkey with the Erasmus program to study in the Turkish Language and Literature Department of Pamukkale University, said:"We are grateful to have the opportunity to visit such a holy place during Ramadan. Visiting the tombs of Ottoman sultans and their sons is very important. This is my first visit to Bursa. I haven't found such a high concentration of mosques and tombs in the other places I've visited. It's easy to see that there are many mosques and tombs here. The city has really moved me." Cengiz Güç, one of the visitors, implied that people should visit this place to get a better understanding of the spirituality of the Ottoman sultans. Mentioning visiting this place provides more information about Turkish history, Güç said: "I learned about Ottoman history by visiting the complex. We visited the tombs and got to pray here during the holy month of Ramadan. The complex offers a very different atmosphere. We were able to establish this beautiful country thanks to them. They left us these lands and gave us a life."