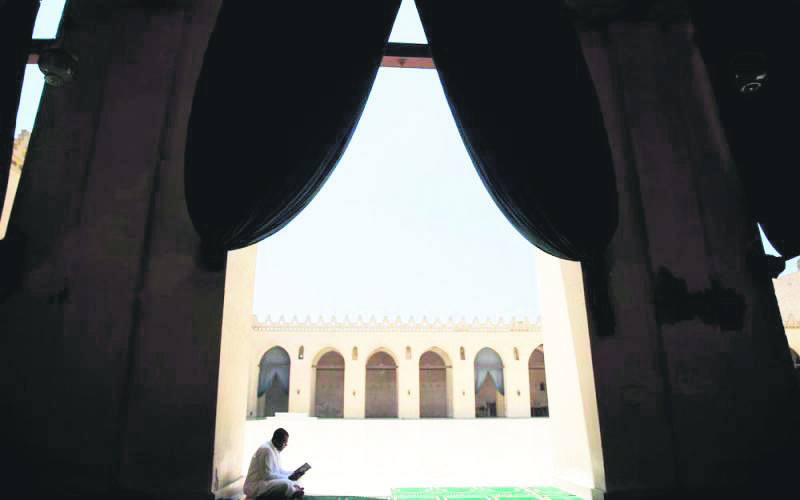 An Egyptian man reads the Quran inside awl-Hakim bi-Amr Allah Mosque in Cairo, Egypt.
by Amir Süleyman Jun 14, 2018 12:00 am

Ramadan joy is the same for Muslims all around the world but how they experience it differs from region to region and country to country. Today, we take a peek into Egyptian Ramadan traditions

Ramadan in Egypt has a special spark and ambiance that one cannot find in any other Islamic country. That's why some Arabs and Muslims prefer to spend the holy month of Ramadan in Egypt to enjoy the charming and special atmosphere in Cairo. Egyptians have maintained their Ramadan customs and traditions over centuries.

Egyptians prepare for the reception of the holy month at least one week ahead when markets are full of Ramadan special products including dates, dried apricot paste, dried plums, nuts, licorice, tamarind, carob and coconut to be purchased before Ramadan.

In working-class neighborhoods, kids collect money from people to buy Ramadan decoration and sometimes, they prepare it from scratch themselves. They decorate streets, homes and balconies with lights, decorations and huge lanterns. Moreover, TV and radio stations start broadcasting Ramadan traditional songs.

The lantern is considered the icon and symbol of Ramadan in Egypt and the Arab world. There is almost one lantern in every home, street and shop in Ramadan. There are different stories about the history and origins of the lantern in Egypt, but it is incontrovertible that it originated from the era of the Fatimid Caliphate.

Whatever the origin of the Ramadan lantern called "fanous" is, it is still a special symbol for Ramadan especially in Egypt. That tradition has been transferred from one generation to another where kids carry and play with lanterns in the streets while singing during the holy month.

The Egyptian tradition of Ramadan lantern has transferred to most Arab countries and become an integral part of the holy month.

In the past, lanterns were handmade from metal, colored glass with a shining candle fixed inside for lighting, however over time the lantern has come to be made out of plastic and other materials where the candle is replaced with lamps and batteries for lighting.

Nowadays, the fanous has many models that are different from the standard and traditional styles. Sometimes they take the shapes of celebrities; Mohamed Salah is the most famous fanous this year.

After the Ramadan crescent is sighted and after Ishaa (nighttime) prayers, Egyptians go to mosques to perform the first Tarawih prayers in the holy month where mosques are full of different age groups including men, women and children.

Recently, there's a new phenomenon which is searching for the best match and looking for a spouse through Tarawih prayers where mothers look for brides for their children who get to see them during Tarawih prayers. Also, young men and women recently go to Tarawih prayers well-dressed hoping to find the one and only spouse during that time.

The most famous mosques where Egyptians perform Tarawih prayers are:

Al Azhar Mosque: It is the most famous mosque in Egypt and the Islamic world built by Jawhar Al Siqili following the orders of Al-Mu'izz li-Din Allah of the Fatimid dynasty after establishing Cairo city.

Al-Hussein Mosque: One of the most famous mosques in the Islamic world built by the Fatimid Caliphate in 1154.

This mosque occupies a special place in hearts of Muslims as Al Hussein, the grandson of Prophet Muhammad (PBUH) is reported to be buried there.

Mesaharati is a volunteer who wakes up neighboring Muslims so they can eat their final meal before starting daily fasting during the Islamic holy month of Ramadan. The Mesaharati wanders the alleys, carrying a drum and sings traditional songs and children play around him with their lanterns and sing with him. Not to mention, by the start of Ramadan, children rush to inform the Mesaharati of their names so they can guarantee that he will call them by their name every night.

"Midfa al iftar Idrab" (iftar cannon fire) is the most famous sentence that Egyptians hear before iftar (evening meal to end the fast) every day, this is considered an inherited tradition for more than five centuries. The cannon is fired announcing the breaking of the fast at sunset. It started during the time of the Mamelöukes in 1439 and Cairo was the first city in the Islamic world to witness this.

Master of the table

Extravagance is one of the Egyptian traditions in Ramadan and the dining table has unique items that are exclusively served only during that month. Egyptians often prefer eating ducks, mahshi (stuffed vegetables), and pasta with bechamel on the first day of Ramadan.

Various drinks and juices are present on Ramadan table. Every dining table should basically have khoshaf (dried fruit compote), tamarind and licorice in addition to many other drinks. Also, Egyptians drink dried dates soaked in milk during Ramadan.

Eating food doesn't end by having iftar in Ramadan, but iftar is followed by desserts and nuts that Egyptians eat excessively in Ramadan. This includes konafa, basbousa and katayef where the latter is only served in Ra

madan and can be found in almost every home.

Going to buy kunafa and katayef is one of the favorite habits for children in Ramadan and they enjoy watching them be prepared at the sellers, this enjoyment exceeds the enjoyment of eating it.

Huge banquets served gratis by charitable people who offer breakfast to the poor, destitute and transient in Ramadan. Banquets varies from one place to another, however, you can find banquets across Egypt whether in rich or poor neighborhoods.

Customs also include seeing young people and kids lining up across streets and roads by time of iftar to distribute free dates and drinks to drivers and passengers to break their fasting on the road in case they can't make it home on time.

It's not wise not to stop or reject what they offer since young people are more likely to through free of charge inside the vehicles so that anyone that needs them will take them.

Egypt is a country of contradictions - where Egyptians pay special attention to worshiping and spiritual practices in Ramadan, on the other hand, entertainment life has no end in Ramadan nights.

Ramadan tents are the most famous places where people enjoy night life during Ramadan nights.

Restaurants and hotels have harsh competition with each other as they serve iftar and sahur (morning fast-breaking meal) meals with traditional Arabic music where families and friends can enjoy eating until sunrise.

There are outdoor venues decorated with Islamic, Arabic and Egyptian folkloric lightening, taste and style. Recently, Egyptians have started calling these venues "Ramadan Nights" rather than "Ramadan tents."