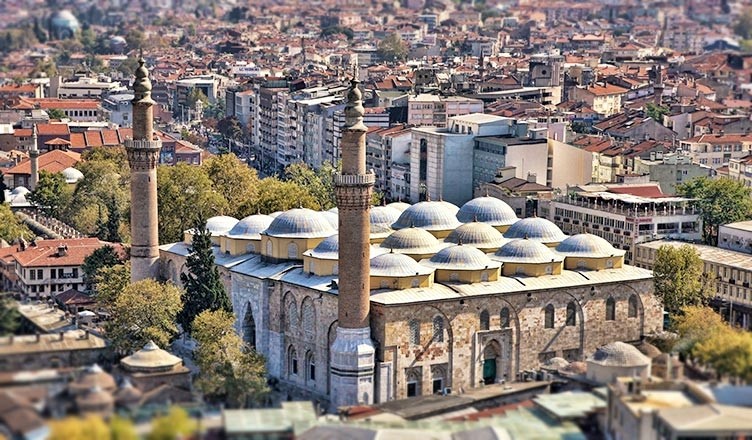 The Grand Mosque of Bursa is the largest mosque in the city and a landmark of early Ottoman architecture.
by Anadolu Agency Jun 18, 2018 12:00 am

Commissioned by Ottoman Sultan Bayezid I and built in the Seljuk style, the Grand Mosque of Bursa is the city's most prominent landmark

The 600-year-old Grand Mosque of Bursa is one of Islam's most famous sanctuaries after the Great Mosque of Mecca, Prophet's Mosque in Medina, al-Aqsa Mosque in Jerusalem and Ummayyad Mosque in Damascus.

It was built in Bursa, the first capital of the Ottoman Empire, between 1396 and 1399 by Bayezid I.

The Grand Mosque, which should be transferred to future generations as an ancestry keepsake, is one of the most important locations for religious tourism in Turkey.

This monumental structure built by Bayezid I, the fourth ruler of the Ottoman Empire, is a grand example of early Ottoman art and is also one of the most important mosques of Turkish and the Islamic world.

At the opening of the match, renowned Islamic scholar Somuncu Baba delivered a sermon. Its first imam was the famous Süleyman Çelebi, the author of "Mawlid."

Famous traveler Evliya Çelebi described the Grand Mosque of Bursa as the "Hagia Sophia of Bursa."

The mosque is a popular tourist destination. It is home to a 500-year-old door cover from the Kaaba.

It was gifted to the Grand Mosque by Selim I, after being brought to Istanbul together with other holy relics following the conquest of Egypt.

Even though the original architect of the mosque is unknown, most scholars agree that it was designed by either Ali Neccar or Hadji İvaz Pasha. The mosque underwent extensive restoration after the 1855 earthquake. All 20 domes were repaired before the mosque was reopened to worship in 1862. The mosque was also damaged in a fire in 1889 but it survived with all its early glory.

It has a rectangular shape measuring 55 meters by 69 meters. It has 20 domes and features two more gates on its east and west facades along with the "Taçkapı" in the north. It has 26 windows lower and 32 upper windows open to the facades and the dodecagon-plan marble pool's dome is left open for ventilation and illumination. The 11-diameter domes are carried by 12 square columns. Its ornamented mimbar, a short flight of steps used as a platform by a preacher in a mosque, is built from walnut wood. Crafted by created by Hadji Muhammad bin Abdülaziz İbnü'd-Dakki it is regarded as a masterpiece of ornamentation.

The mimbar is interestingly formed of 6,666 pieces, corresponding to the number of verses in the Quran. There is a depiction of our galaxy on its west facade and the solar system on its eastern facade where the mimbar faces the mihrab, the semicircular niche in the wall of a mosque that indicates the direction of prayer.

The Grand Mosque is deemed as a "calligraphy museum" with 192 calligraphy works decorating its walls. There is 87 calligraphy works by 41 different calligraphers, who used 13 different fonts. Of the total 192, 105 are on plates. The calligraphies include verses from the Quran, hadiths, 99 names of Allah as well as the different names for Prophet Muhammad and notable Islamic scholars. The writings on the feet and walls of the mosque belong to famous calligraphers like Abdülfettah Efendi, Kazasker Mustafa İzzet Efendi, Sami Efendi, Mehmed Şefik Bey. There is also a plate belonging to Mahmud II at the mosque. The verse belonging to poet Rahimi, dating back to 1549, on the pediment underneath the stairway built by Mustafa Efendi, a trustee of Bayezid I Foundation, is known as the oldest writing in the mosque. Many of the calligraphies offer motivating advice on worship, life and solidarity. A hadith about the Sultan is written on the sultan's seat while another hadith, which advises that person coming out of the mosque should act as decently as they do inside. The letter "waw" is widely used in these writings. While these letters show a high level of art and aesthetic value, it has a deeper meaning as it reminds us of being in the mother's womb and Sujud or prostrating before God. Therefore, the inside of the mosque is full of intertwined and gradually shrinking waw wrapped together like ivy.

'An atmosphere that caters to one's soul'

Turan Akyıldız, a visitor from Istanbul, said this mosque was a keepsake. It has a sentimental as well as historical value. He said since this where the foundation of the Ottoman Empire was laid, the mosque's spirituality is crucial. "I am pleased to be here as a Muslim. I think everyone should come and visit this place," said Akyıldız.

Yener İlhan from Artvin said: "We are visiting Bursa and could not leave without praying at the Grand Mosque. The atmosphere here is very different. Maybe because it is a historic mosque. It gives a different pleasure. It is a very nice location. I would like to visit it frequently but I can't."

Murat Sevinçtekin noted that he and his friends came to the Grand Mosque for morning prayers from Istanbul. He added that it has a unique atmosphere compared to the mosques in Istanbul. He compared this experience with his visit to Mecca and Medina.

"There's an atmosphere that caters to one's soul. I believe everyone who has the opportunity should come and see it.

Visitors may both pray here and also learn about Ottoman history. We were very impressed with the information about the architectural features and the calligraphy plates in the Grand Mosque," added Sevinçtekin.