Where is the humanity? 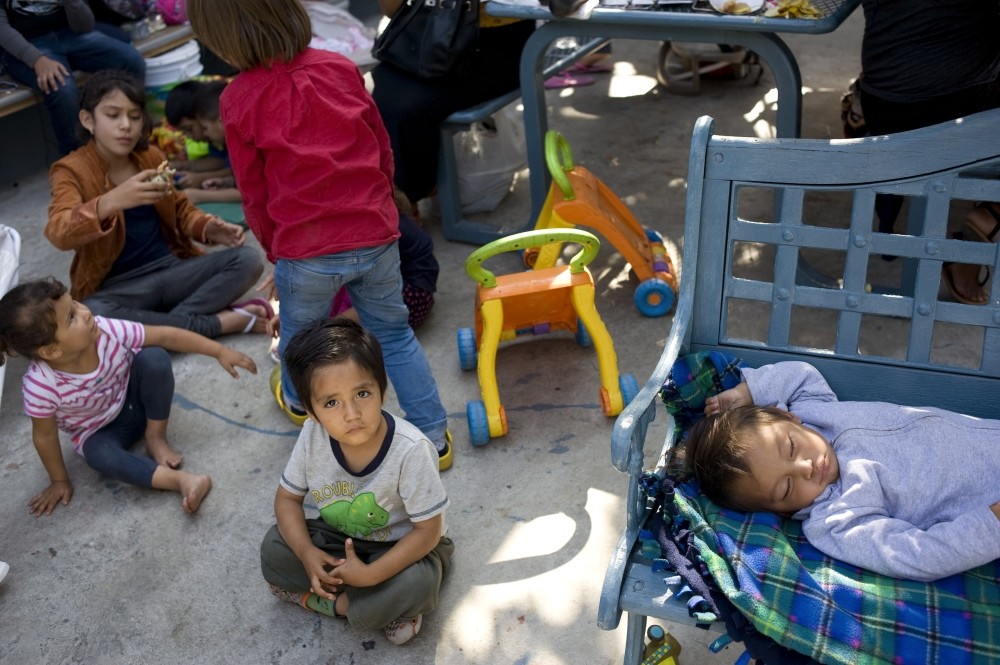 A child from the Mexican state of Michoacan looks on while sitting in the patio of the Centro Madre Assunta, a shelter for migrant women and children, in Tijuana, Mexico.
by Jane Louise Kandur Jun 23, 2018 12:00 am

This week global media has highlighted the plight of immigrant children and how they are treated in different countries. From Israel in the 1950s to U.S. President Donald Trump today, inhumane treatment of vulnerable members of society has rocked the news

What a week this has been. Donald Trump has finally taken a step back. Children accompanying families who snuck over the border from Mexico are no longer to be separated from their families. They are now allowed to stay together - albeit in prison. Now, instead of being locked in mesh cages with thin blankets far from their parents, these children can stay with their parents when the latter are locked in prison for trying to cross the U.S. border without permission.

This week also saw a report in Al-Jazeera that focused on the scandal of Israeli children who had been abducted from their families to be given to other Israeli families. Although some deny that such a thing ever happened, there seems to be a great deal of evidence to support the claims of mothers who lost their children and children who find out later that they had been adopted, with their adoptions lacking adequate paperwork.

The children in Israel were kidnapped from Arab-Jewish families from a number of Arab states, although for the most part these babies came from Yemen. There were discussions in the 1950s in Israel about how to "de-Arabize" these new Israelites, and how such people were primitive, perhaps even mentally retarded, in comparison to their European cousins.

There were many Holocaust survivors who could not have children. The leading argument was that the Arab families, in particular the Yemenites, had large families, and would not miss a child here or there. A nurse in a hospital at the time claimed that Yeminite parents "were not interested in their children."

Shoshana Madmoni-Gerber, an Israeli professor based in the U.S., told how her aunt had lost a baby. Her family had been among the 50,000 Jews brought to Israel from Arab states in 1949 and 1950. Her aunt gave birth in 1949 and was asked to leave her baby at the hospital. However, she refused. The aunt returned to the temporary camp where the Arab Jews were being held; here her baby was forcibly taken from her.

It is thought that as many as 5,000 Arab-Jewish children were given to new families. The main idea behind this action seems to have been an attempt to combat or "educate out" what was seen as the "primitive" and "backward" nature of Arab Jews.

The outrage and anger being expressed today at these actions is reassuring. We have come a long way from the 1950s and have overcome a great deal of xenophobia and superior attitudes that stem from colonialism.

U.S. President Donald Trump backed down on Wednesday, World Refugee Day, and signed an order that allows illegal immigrant families to stay with their children. The public outcry at the cruel separation of families, of placing children in wire cages, and infants and toddlers in care shelters won the day.

Before this about-turn, Trump's henchmen had backed the decision to place children in separate custody by saying that, "People who want economic migration for their personal financial benefit ... can make a claim, we will process it and make a decision." Until the decision is made, however, they must face the consequences.

Others who spoke out in support of Trump's decision compared the centers to summer camps or boarding schools. Such an approach totally ignores the footage of children in what are basically oversized cages, cubes of chain-link fencing which are monitored by 24-hour video surveillance.

Another excuse that was offered was: "The American people are footing a really big bill for what is tantamount to a slow-rolling invasion of the U.S."

The president himself tweeted that the Democrats wanted to "infest" America with "illegal immigrants."

The first sad aspect of this matter is that Trump, to some extent, is right in some of his claims. Trump is adamant that he was only trying to uphold a law that already existed. According to Bloomberg, "Arrests by [the Trump] administration's Immigration and Customs Enforcement in 2017 were about half what they were during President Barack Obama's peak years, 2010 and 2011, according to a new report by the Migration Policy Institute." Trump is more vocal, more aggressive, more controversial but less effective.

As much as it sticks in my throat, it needs to be said: Perhaps Trump has done something positive for immigration. He has brought the issue into the limelight and has everyone, literally everyone, talking about the terrible U.S. laws.

But there is a sadder aspect and here Trump will not get off so lightly. Although Trump and his supporters depict the illegal immigrants as economic immigrants, coming to look for a better life, the vast majority of these families are actually looking not for a better economic situation, but a safe haven. According to a report in Reuters, many are fleeing gang warfare, natural disasters or terrorist attacks. They make their way through hostile territory, facing "threats of robbery, death by exposure and gangs that try to sell them into sex or labor trafficking."

By depicting these families as "economic" immigrants, Trump's administration manages to soothe their own conscience. They manage to find a way to justify locking innocent people, people who are merely seeking safety, in prison - with their children. To lock an entire family up is only slightly better than locking the adults in one prison and their children in another. It is only slightly better than border patrols threatening children with stun guns or than these same children being "lost" in the American system, much like Arab-Jewish children were "lost" in the 1950s.

Trump tried to find a defense for the indefensible by tweeting: "The people of Germany are turning against their leadership as migration is rocking the already tenuous Berlin coalition ... Crime in Germany is way up. Big mistake made all over Europe in allowing millions of people in who have so strongly and violently changed their culture! We don't want what is happening with immigration in Europe to happen with us!"

The idea that people from a different culture are less civilized, less capable, less welcome has not actually disappeared or changed in any significant way since the 1950s. These are of the same religion - the only difference is culture. The people coming over the Mexican border are Christian; the Yemenites were Jewish. Yet both were and are scorned and denigrated.

The Syrian refugees, numbering more than 3.5 million, have become a matter for political debate in Turkey. The 3.5 million Syrian population is increasing, with an estimated 1,000 new births and arrivals in Turkey happening every day.

Brookings shared a report in which it praises Turkis

h municipalities for their efforts to make the refugees feel at home. The municipalities offer free language courses, social support programs and a migration policy center for the municipalities in Istanbul. Refugees get free health care and free education. Yet, these programs are not taken into consideration by the U.N. or other international refugee programs.

The situation for refugees and immigrants is better in Turkey; but this is not to say that all is rosy in Turkey. As the election looms, the opposition politicians are using the refugees as political fuel for their fires. Muharrem İnce, the Republican People's Party (CHP) presidential candidate, has criticized the government because tens of thousands of refugees were allowed to return to Turkey after going back to Syria to visit relatives for the eid. İnce said: "If you [the Syrians] are able to go there, stay 10 days and return, then you could stay there permanently. Why are you coming back? ... Is this [country] a soup kitchen? My country is full of jobless people."

Kemal Kılıçdaroğlu, the leader of CHP, was not to be outdone: "Syrians are human too but go to your own country. Your mother, your father, your country, your flag is there,"

Meral Akşener, presidential candidate for Good Party (İP) blamed the Syrians for a drop in living standards. And what does the Justice and Development Party (AK Party) say? Justice Minister Abdülhamit Gül stated the clear fact that Syrian refugees actually want to re

turn home. They do not want to stay in Turkey. But it is only as their homelands become safe, due to the security provided by the Turkish anti-terror operations in northern Syria, that families can start to return. In fact, almost 40,000 Syrians have returned home to cities like Afrin, Jarabulus and al-Bab. People from Manbij have expressed their support for Turkish forces patrolling the city in a bid to bring security to the area. The Turkish approach to the problem of immigration is one that shows insight, sensitivity and humanity. Allow people in with the understanding that people do not leave their homes or families easily. If they do leave, it is almost always because they fear for their lives. But also try to do whatever you can to ease the problems that they face in their homelands. If this means investment, then invest. If there are terrorist groups active in the area, help those who are battling the terrorist groups. Allow people to live in their homelands in peace and prosperity. This is what the 21st century approach should be, and Turkey is leading the way.