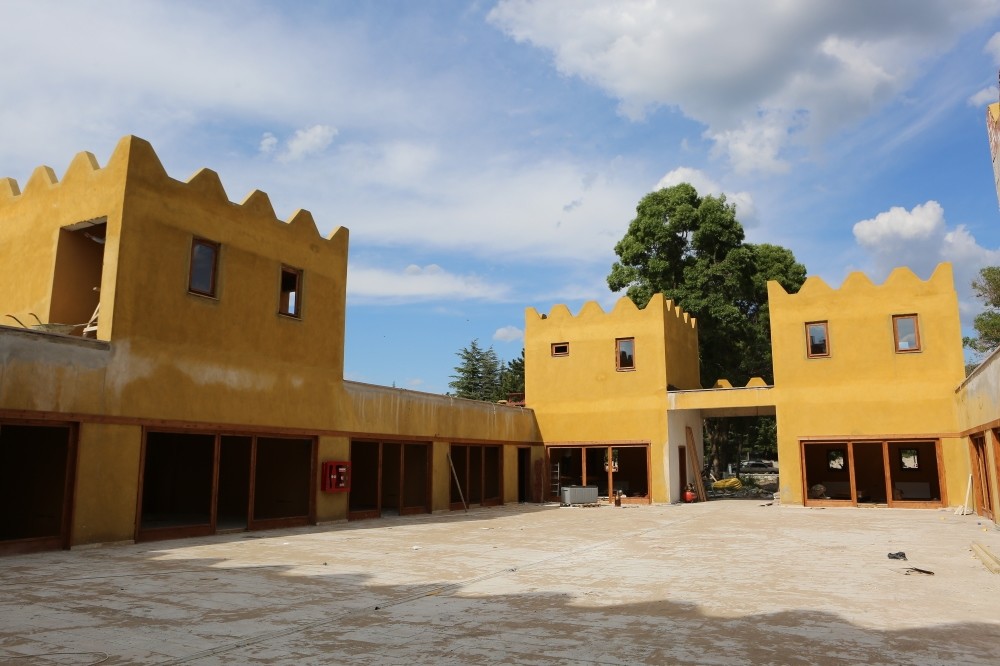 A Hittite village is being built in Hattusa, the ancient capital of the Hittites, to showcase life as it was 3,500 years ago

A Hittite village is being built in Hattusa, which was the capital of the Hittites for 450 years in Boğazkale district of Çorum province. Hattusa is the only ancient city which holds the titles of "World Cultural Heritage" and "Memory of the World" by UNESCO. Visitors to the village will get the chance to witness the daily lives of Hittites as they were 3,500 years ago and live in rooms resembling jail cells from that time period.

Hattusa is one of the most important tourist destinations in Turkey, with its natural, historical and cultural sites. It hosts the cultural heritage of Hattians and Hittites, considered to be part of the first civilizations of Anatolia.

The Hittite capital has a 6-kilometer city wall which surrounds the ancient city, monumental doors, a 71-meter long underground tunnel, a palace in Büyükkale, 31 temples, wheat silos and the Yazılkaya Open Air Temple, which are all worth visiting.

Since certain structures and architectural groups at the ancient site have been preserved perfectly, the ancient city was added to UNESCO's "World Heritage List" on Nov. 28, 1986 and cuneiform script tables, representing the oldest examples of ancient Indian-European language were added to the "Memory of the World" list of UNESCO in 2011. The works for promoting and increasing the number of tourists visiting the site continue with the efforts of the Boğazkale District Governorship.

Speaking to Anadolu Agency (AA), the District Governor Turan Soğukoluk noted that they are about to complete the Hittite Village built on 1.7 acres in order to boost tourism and improve tourist numbers. Soğukoluk stated that the rooms where tourists will stay at the Hittite village are built according to the original concept of a "Hittite jail."

Supported by the Middle Black Sea Development Agency (OKA), the project is being built for approximately TL 1.5 million ($320,000).

Soğukoluk expressed that they will be offering a life look into how the Hittites lived. There will be stone, iron and terracotta crockery workshops, a king's room with a throne and areas tourist can be accommodated at to reflect the atmosphere of those times. He also added that there will be three souvenir shops and the architecture style will be the unique Hittite architecture.

"As soon as we announced the project, it was widely discussed in the international arena. There were academics who enquired about the project from the Netherlands," he added.

"The Eygptian-Hittite Peace Treaty discovered in the archeological areas is the first written peace agreement in history. We will offer a section of Hittite life to visitors from foreign countries. When tourists visit the site, they will get to know how the Hittites cooked bread, how they manufactured crockery, how they forged iron. They will see what the throne the Hittite king sat on looked like, they will get details about the throne; get the chance to see Hittite architecture. When they want to stay, we will offer them hotel services in Hittite prisons," he said.

The district governor also noted that all their efforts were for making sure the visitors to Hattusa leave happy and satisfied and added that they were anticipating the support of renowned figures and brands, institutions and entrepreneurs into turning Hattusa into a center of attraction again.

The Hittite Empire in the late Bronze Age was one of the civilizations that played an important role in the development of urban life. Hattusa, the capital of the empire, lies near modern Boğazkale, Turkey, within a great loop of the Kızılırmak River and has lot to offer to history and archaeology enthusiasts.