Ottoman scholar Ebubekir Efendi (middle) made his impact in South Africa and on Muslims in the region in the 19th century.
by Anadolu Agency
Jul 04, 2018 12:00 am

The great-grandchildren of Islamic scholar Ebubekir Efendi, who was sent by Sultan Abdülaziz to South Africa, visited Turkey to get a sense of who their ancestor was and explore their Turkish roots

Ebubekir Efendi was sent at the request of the British Empire to the Cape of Good Hope in 1862 in order to teach Islamic thought and culture to the Muslim community in the region and help resolve disputes among them.

Currently living in Cape Town, his great-grandchildren relayed the excitement they felt in the homeland of their grandfather, although almost two centuries have passed since Ebubekir Efendi's departure for South Africa.

Having visited Ebubekir Efendi's hometown Erzurum with her husband last year, his great-grandchild Washila Muhammad paid a visit to Istanbul this year, along with her children and grandchildren, to learn more about Turkey and Turkish people.

Saying that she spent her childhood listening to stories about Ebubekir Efendi and Erzurum, Muhammad said: "My great-grandfather Ebubekir Efendi went from Erzurum to Cape Town to teach Islam, around 160 years ago, and never turned back. He assisted many people in Cape Town and left a great legacy behind him. Even today, it is possible to find traces of Ebubekir Efendi in Cape Town and the rest of South Africa. His legacy continues to shed light on our present and future."

Muhammad expressed that they learned about Ebubekir Efendi's life in Turkey thanks to the work of researcher and writer Halim Gençoğlu on Ottoman traces in Africa at Cape Town University in 2009. 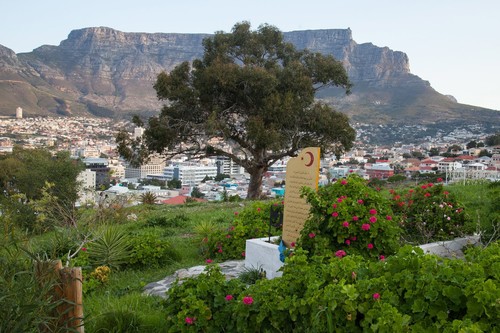 The tomb of Ebubekir Efendi is in Cape Town where he is still remembered fondly by Muslims.

She said they decided to visit Erzurum to pursue the legacy of their ancestor after reading Gençoğlu's work:

"We did not know very much about our ancestor's life before he came to South Africa until Halim Gençoğlu researched our great-grandfather at Cape Town University. During his research, Gençoğlu discovered the madrasah where Ebubekir Efendi taught. That madrasah has been hosting lessons and lectures since then. Also, the mosque where he worked as an imam is still active.

"The recognition of our great-grandfather to such an extent surprised us a great deal when we came to Erzurum. The people of Cape Town know him very well. And we were so pleased when we saw that the Turkish people also recognize him. Many Turks who travel to Cape Town do not leave the city before visiting the tomb of Ebubekir Efendi. So, this year, we have come to Istanbul as a family."

Speaking on the work Ebubekir Efendi did after moving to Cape Town, Muhammad said:

"He established many schools and trained thousands of students. He trained and assisted society and enabled the introduction of true Islam. Therefore, Ebubekir Efendi has a significant role in South African history. Studying with great passion, Gençoğlu surfaced many things that we had not known about our great-grandfather. We are grateful to him for his excellent work."

"Gençoğlu continues to conduct valuable research in South Africa and endeavors to open a museum for Ebubekir Efendi. We are expecting support from the Turkish people and government to launch this museum so that the accurate information we have about our great-grandfather and Ottoman history can be passed on to South Africa, Turkish people and future generations."

Muhammad said that it was a very exciting experience to return to Turkey after 160 years and added that she sometimes thinks about moving to Turkey:

"My ancestors also dreamed about returning to Turkey, but they could not. The Turkish government should give South African Turks an opportunity to return to their homeland. If we decide to move to Turkey, I definitely would not want to live in Erzurum. We loved the city very much, and the administrators invited us to settle in the city. But it is far too cold for me."

Washila Muhammad's 43-year-old son Muzaffer Muhammad said that he decided to attend this year's family trip after the family's trip to Erzurum last year, adding that his family told him a great deal about Turkey and Turkish people: "I know the story of my ancestor Ebubekir Efendi. We learned about why he came to South Africa and what he did there. As a family, we are proud of my great-grandfather and his services. As much as we love Turkish people, Erzurum has a special meaning for us since our great-grandfather was from this city."

Muhammad's 37-year-old daughter Dervish stated that she is very fond of Turkey and Turkish culture and wants to settle in Istanbul. "I like Turkish women. They enjoy freedom in their clothing and lifestyle. No one is judging each other according to their clothes," Dervish said.

Sent to the Cape of Good Hope during the period of Sultan Abdülaziz to teach Islamic thought and culture and resolve religious and social conflicts among Muslim communities, Ottoman scholar Ebubekir Efendi moved to Cape Town in 1863 and worked in South Africa for around 17 years. With only 15 days of arriving in Cape Town, he established a school in the city and enrolled more than 300 students in the school within 20 days. He taught the Quran along with Arabic and Turkish and also read religious books in his classes.

During his time in South Africa, Ebubekir Efendi learned Dutch and English in order to address people more effectively. In the course of seven months, he translated many notable religious books into local languages that he had rapidly learned. Fighting to spread Islam in its true sense for years, Ebubekir Efendi passed away on August 29, 1880 in Cape Town and left a rich cultural legacy behind, along with many mosques and schools.