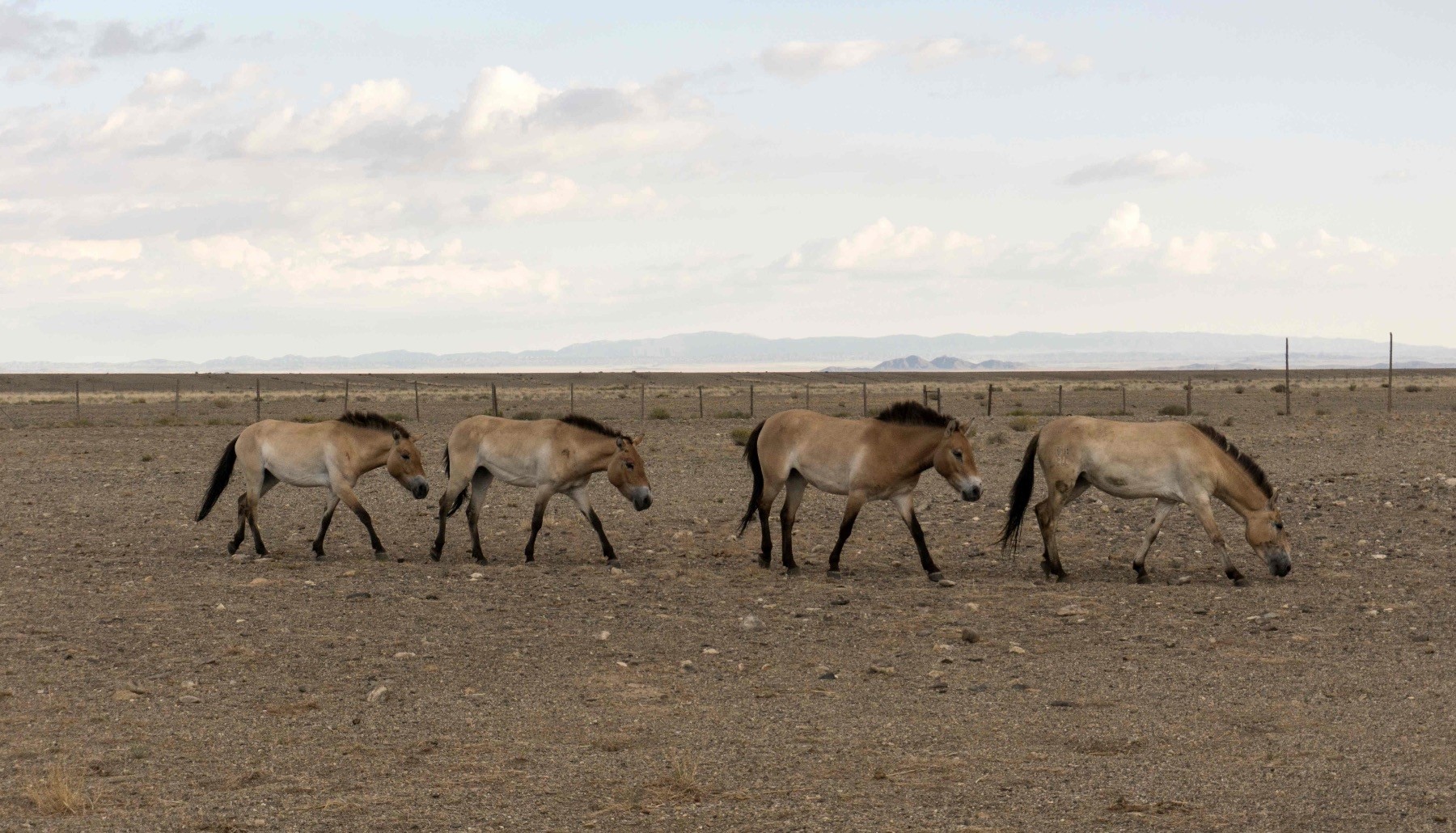 Przewalski's horses, an ancient wild horse breed, named after the Russian explorer Nikolai Przhevalsky, have almost overcome the threat of extinction and will continue to run free thanks to a breeding program designed to preserve their genes

Their violent kicks rattle the small army plane flying over Siberia as it transports the four rare horses from Prague to the vast Mongolian steppe where the once near-extinct species is slowly recovering.

Known as Przewalski's horses, the ancient species has narrowly avoided extinction thanks to breeding programs at zoos worldwide and is now gradually being re-introduced to a wildlife reserve in its original homeland.

But confined to wooden boxes, Finnish sisters Helmi and Hanna, German mare Spes and Yanja from a Swiss zoo are not enjoying the 30-hour trip to get to their new home one bit.

"The horse might make a wrong move, get stuck and lie down, stopping the blood flow to the legs. If this happened on the truck, we might release them for a run in nature, but you can't do that on the plane," he said.

Prague Zoo, which has bred Przewalski's horses since 1932 and keeps the world genealogy book for the endangered species tracking all new births, launched a project to reintroduce the animals to Mongolia in 2011.

"These horses are getting a chance others won't have. They'll return home," said Jan Marek, a Prague Zoo curator in charge of ungulates.

But, for the moment, they are restless after a busy day, which started at an acclimatization center on a farm belonging to Prague Zoo, south of the Czech capital.

Before being enclosed in the transport boxes, they were put to sleep, tested and treated by vets.

Then they were taken by truck to a military airbase on Prague's outskirts and loaded onto the plane.

Marek and Vodicka monitor the horses throughout the trip, trying to calm them by talking and whistling, or with hay and pheromones.

After landing on the dirt runway in the western Mongolian town of Bulgan Sum, the mares take a bumpy truck journey to the remote Takhin Tal reserve, where they are finally able to gallop into an enclosure to find their hooves in their new home.

In the first half of next year, they will be released into the wild to join either a lone stallion, or be part of a harem - a group of around a dozen horses led by a dominant stallion - in Takhin Tal, which is part of the Great Gobi B protected area spanning over 9,000 square kilometers (3,600 square miles).

"Harem organisation is a very nice social structure, everybody has his own role," Ganbaatar Oyunsaikhan, Great Gobi B director, told AFP.

Rangers able to discern a stallion or harem at a distance when it is barely visible to the untrained eye, even with binoculars, will monitor the mares as they explore their new home.

Prague Zoo has released a total 31 Przewalski's horses into the Mongolian wilderness, with funding for the project provided by zoos from across the globe.

"I decided to do this after the 'dzud', or very severe winter of 2009-2010, which had cut local (Przewalski's) horse numbers by two thirds to about 50," said Prague Zoo director Miroslav Bobek, standing outside a yurt in the Mongolian steppe.

First documented by Russian scientist Nikolai Przhevalsky in 1881, the species was nearly extinct in the 1960s and is still listed as endangered by the International Union for Conservation of Nature.

Bobek said the current population stands at around 2,400 horses, with 800 in the wild including in other parts of Mongolia and in China.

"All the living Przewalski's horses come from a genetic bottleneck of about 10 animals," he told AFP.

Zoologists hope the four new mares from different zoos will improve the genetic mix of the Mongolian herd.

"If we only brought Czech horses, it would be the same blood. We're trying to make the population as diverse as possible," says curator Marek.

New genetic research has suggested that the stocky horses that inspired dreamy prehistoric cave paintings are not the world's last remaining wild horse as had been thought.

The journal Science reported in February that, despite their prehistoric looks, Przewalski's horses were actually domesticated animals that escaped their human owner in the Botai area of northern Kazakhstan around 5,500 years ago.

Bobek described the study as "very interesting," but is cautious.

"In any case, the uniqueness of Przewalski's horse is obvious. We'll carry on.w