Second Constitutional Era in Ottoman Empire: A failed dream in the hands of Unionists 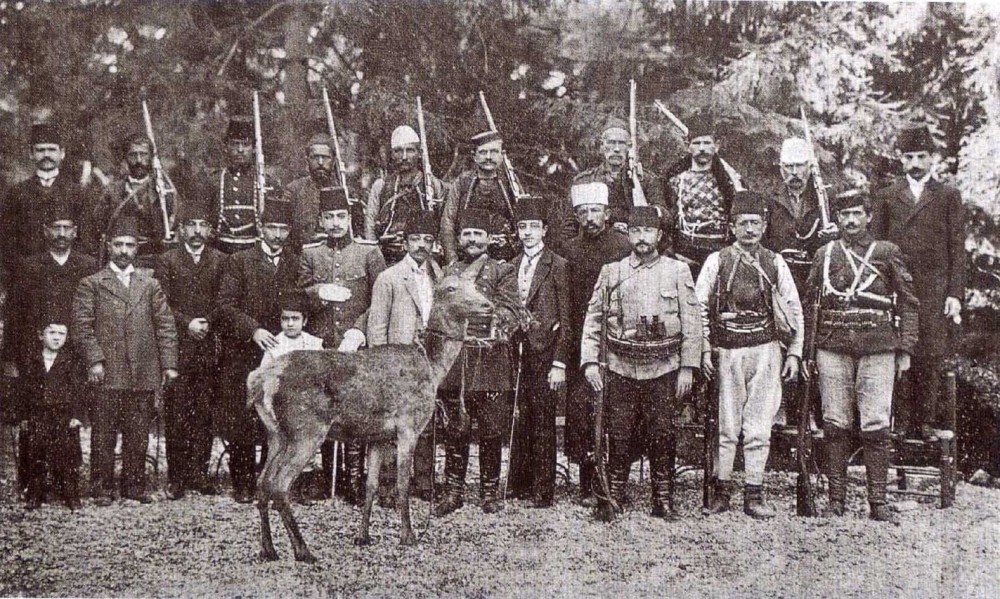 A photo of Enver Pasha and Resneli Niyazi with their followers while they were campaigning against the sultan on the mountains of Macedonia.
by Erhan Afyoncu Aug 03, 2018 12:00 am

The first seed of the Committee of Union and Progress was sown in 1889. This society grew, uniting other opposition groups in time and became effective when soldiers started to get involved in it. After the Reval Meeting, the Committee of Union and Progress members, or Unionists in short, believed that the country was divided and shared among the powerful; they started to create intense campaigns, saying something should immediately be done.

Sultan Abdülhamid II took action to identify and locate the Unionists who were hurting the integrity of the country. Enver Pasha went to the mountains, leaving Thessaloniki on June 25, 1908, when he learned that he was wanted. Some days later, Resenli Niyazi went to the mountain in Resen with his 150 soldiers.

Meanwhile, Enver Pasha was on the mountain giving fiery propaganda speeches about the re-implementation of the constitution and organizing oath-taking and society-entrance ceremonies.

Telegraphs were coming from the four corners of Rumelia to Istanbul in order to force the hand of the sultan to put the constitution into force again. While most of the telegraphs were courteously demanding, others were threatening, stating, "If their demands were not met, the army will obey someone else, coming to Istanbul."

Successive assassinations of officers who represented the sultan and the shooting of Şemsi Pasha paved the way for the Unionists.

After spending time on the mountain, Enver Pasha took Köprülü, located in Modern Macedonia, on the night of July 22. In the meeting held there, it was decided that freedom would be announced the next day. On July 23, the constitutional monarchy was declared with cannon fires by the Unionists shouting "Long Live Nation! Constitutional Monarchy! Freedom!" Then, Enver Pasha sent a telegraph to Istanbul, saying: "We treated the patient [the Ottoman Empire]. Our Bulgarian citizens are with us. Please, mediate so that our rightful demand can be carried out." Another declaration for freedom was in Bitola, Macedonia. When Abdülhamid II announced that the Parliament would be open upon these developments, the Second Constitutional Era began.

The train which Enver Pasha, the so-called freedom hero, rode reached Thessaloniki after stopping in many places for celebrations. Talat Pasha gave a red bound Ottoman Constitution of 1876 as a gift to Enver Pasha, who was welcomed by a large crowd. However, the Unionists who wanted to bring so-called freedom to the empire would establish an administration that would not let people breathe and would shut their opponents up by violence.

The interesting thing is that the Committee of Union and Progress notables did not even read the constitution, for which they struggled against the regime of Abdülhamid II for many years.

When Dr. Nazım Bey, one of the most important figures among the Unionists, lost power, he said that he never read the constitution but heard from his friends that it was something good in a conversation in Moscow.

110th anniversary of the second try of constitutional monarchy 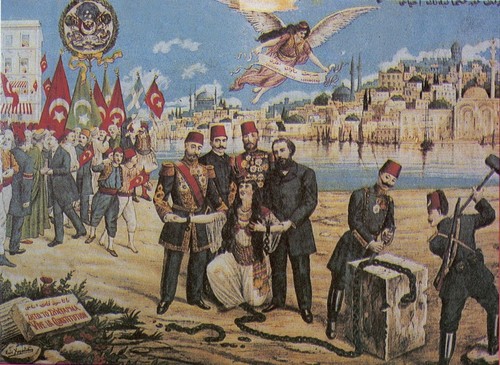 Enver Pasha and Resneli Niyazi portrait as "freedom heroes" in a poster.