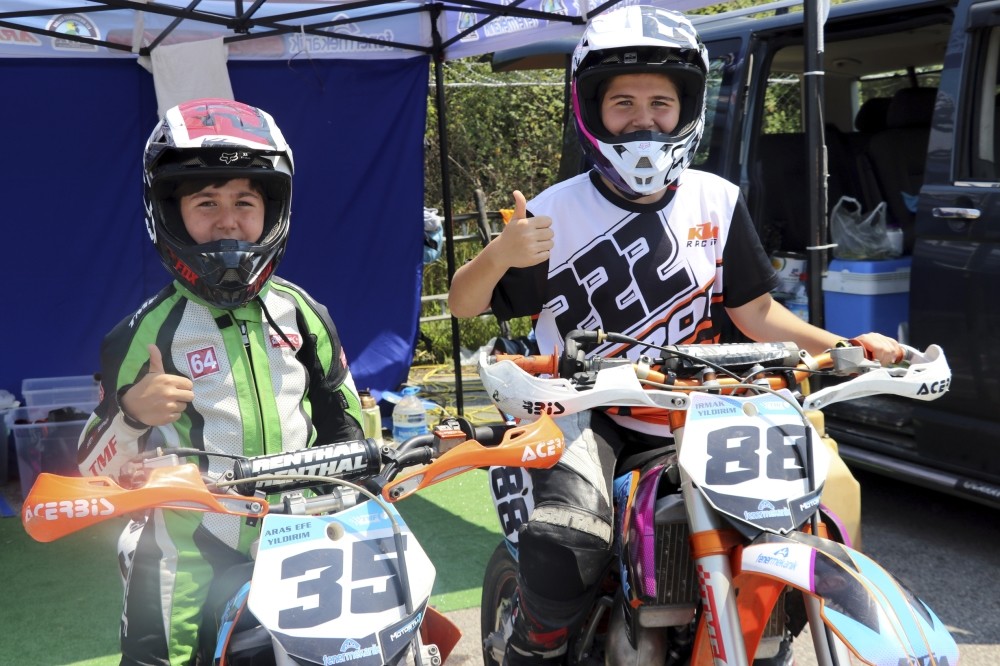 Irmak and Aras Efe Yılmaz siblings are proof that age is not a barrier to following your ambitions. The duo is dominating the race tracks on their motorcycles

It is good to start a sport at an early age to get a better grip of the game. Kids usually start with traditional sports such as basketball, volleyball or football, however two siblings from Sakarya decided they wanted to be a part of an unexpected and dangerous sport for their age - motorcycle racing.

The siblings - Irmak, 13, and Aras Efe Yıldırım, 11, - who started to ride at an early age thanks to their motorcycle enthusiast father, are happy to compete together even if they are rivals on the track.

The Yıldırım siblings, who race at the Turkey Supermoto Championship in the 85 cc and 65 cc categories, were introduced to motorcycles when they were little with the support of their father. Becoming pro motorcyclists rather quickly, the sister and brother duo started attending competitions after a while.

No matter how they compete with each other, the siblings support one another in the races and go like the wind on the track.

Irmak Yıldırım started to ride at the age of 5. It might seem a little strange for a girl to start riding a motorcycle at that age but since her father, Erdoğan Yıldırım is a racer, it is not so strange after all. Up until now, Irmak was riding her motorcycle for fun but this year she decided to race.

"It was hard at the beginning. Everyone was passing me, and they were trying to push me off the track. However, I was encouraged by my teachers and family and now I'm pretty good. It is really fun to ride a motorcycle. I enjoy it. This is why I started this sport."

Explaining that she gets really excited before races, she said, "As you enjoy it, your speed gradually gets higher. I am scared because of the ambition of men sometimes. I am nervous when I think what if I fall on a bend. We do it better, accelerating gradually. I improved very much but it is not enough in terms of passing someone. I hope I will be better this year. My aim is to compete in 85 cc. I want to have successes and to pass men on the track." 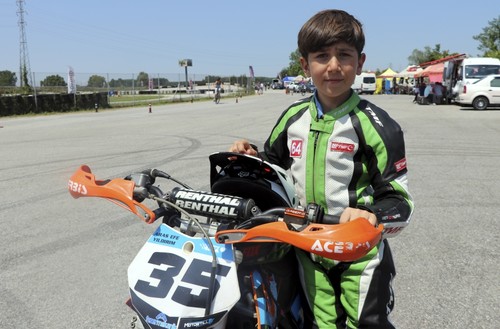 Aras Efe Yıldırım has been racing at championships in Europe. He became third in his latest race in the Balkans.

She also said she is really happy to compete with her brother and they always help each other.

"My brother participated in competitions before me. He taught me some techniques. Now I am faster than him and my motor is bigger than his motor. Therefore, I support him. We win, giving clues to each other. When we have a competition together, we scramble," Yıldırım continued.

She indicated that she took Ares Stefan Bengiç as an example and wants to be fast like him.

Aras Efe Yıldırım, who came in third place in his latest race in the Balkans, also started to ride motorcycles at a very young age. Despite his success, he still gets the chills before every race.

"I get excited before races. It is good to compete with my elder sister but we argue sometimes. We become very competitive as we race and challenge each other on the track. We almost caused each other to fall a few times but we pulled ourselves together at the last moment. It is good to be on the track together with my sister. I feel safe as we live in the same house."

Despite his young age, Aras Efe Yıldırım not only races in Turkey but abroad as well.

"I competed in Greece and Bulgaria. I got third in the Balkans. I love racing but I will have another job in the future. I plan to continue racing as a hobby. I took Kenan Sofuoğlu as a role model and want to be like him," he said.

Erdoğan Yıldırım, who is a board member of the Turkey Motorcycle Federation (TMF), initially thought that his kids would see motorcycles as a hobby. However, his children turned into the biggest racers in their age groups.

"Aras started to ride a year and a half year before Irmak. Therefore, he is more experienced. However, the motorcycle that his sister uses is bigger. When he passes his sister, he feels cool which annoys Irmak very much. There is such a struggle between them," he said.

Stating that riding as a sport is difficult without a sponsor, Yıldırım continued, "Children also have sponsors. I have been involved since the TMF was established. My children loved it as they go racing with me. It was a hobby in the beginning. We want our children to be confident. They are advancing toward being professional. We will support them as long as we can and they compete."

Although her husband and children are devoted to racing, Ferya Yıldırım still thinks it is a dangerous sport for her children.

However she says she wants to see her children happy, so she does not prevent them from racing.

In fact Ferya Yıldırım is well aware of the fact that falling is the nature of the sport as she also rides with her husband from time to time.

"We got used to small accidents but god forbid," she continued.

"Girls are more fragile. Therefore, I gave much more attention to my daughter but I fear for them both. They are not in the same race here in Turkey but they are generally in the same group at races abroad. The excitement is different when that is the case. The adrenaline gets higher both for us and for them. They compete at the same time. You can't pick one of them to win," she said. Mentioning the competition between the children, Mrs. Yıldırım said, "When one of them passes the other in a race, they usually end up arguing about who is faster. We make efforts so they don't acquire bad habits. If they become champions, we will be happy but it is not the main goal. Them being good sportspeople is important for us."