Bayram, a time for family, friends and community 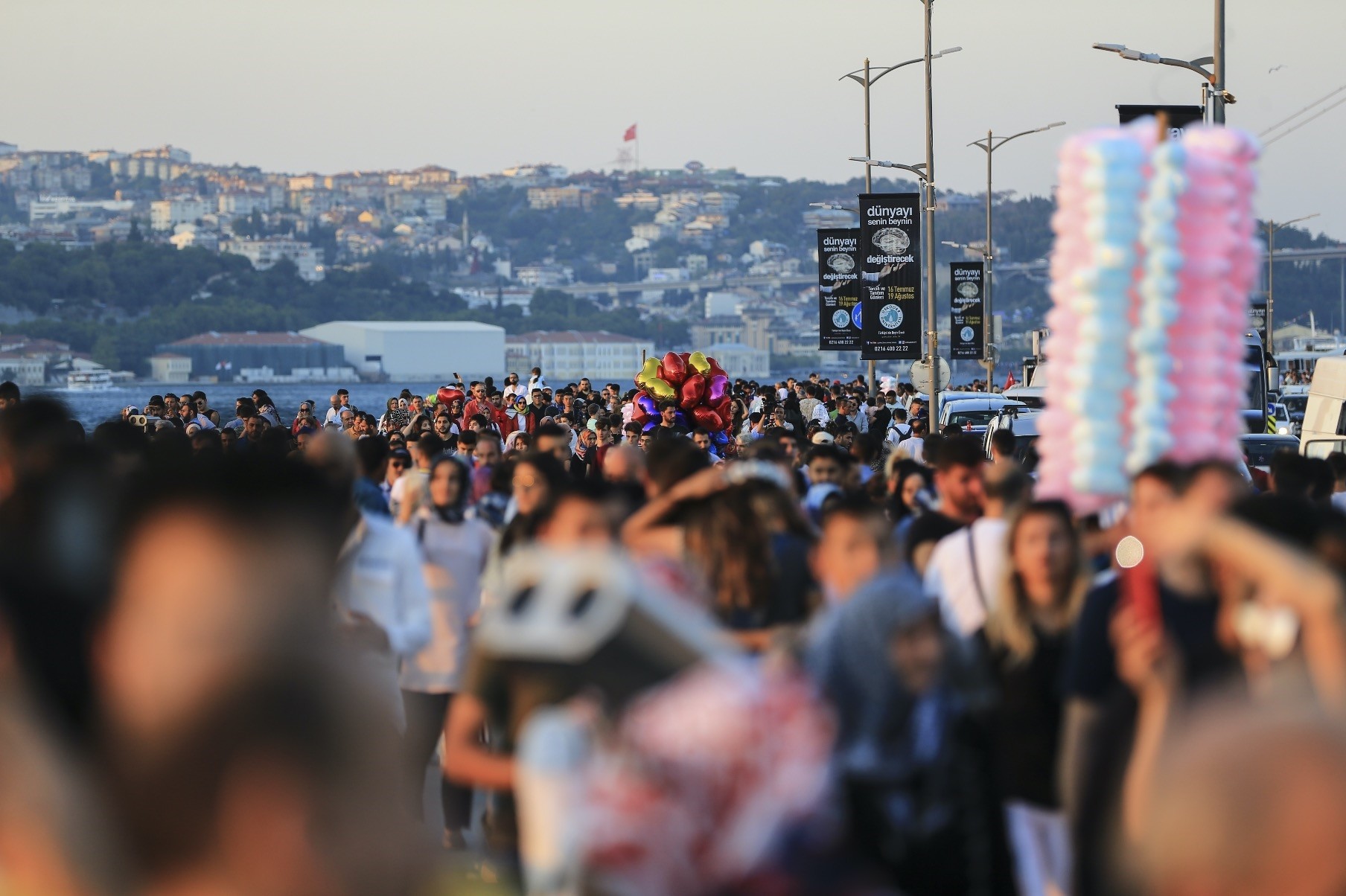 People flock to the streets of Istanbul to have a jolly time with their families.
by Jane Louise Kandur Aug 25, 2018 12:00 am

Another bayram has passed; as with every bayram, this bayram was a time for family and friends. Taking a trip into Central Anatolia reminded us once again that there is a profound difference between Western society and Turkish society

Bayram (eid in Arabic) is a time for family, friends and neighbors. A time of community. A celebration of being part of a larger ummah.

In particular, the Qurban Bayram is a time in which the community comes to the fore. The word Qurban/Adha means sacrifice. For this celebration, every person who is financially able to, that is, anyone who has above a certain amount of surplus income is required to sacrifice a sheep or cow (or camel).

On the first morning of the bayram there was a discussion on the radio about the sacrifice. There are those who contend that sacrificing an animal should become symbolic, i.e. a certain amount of money be donated to some charity rather than taking the life of an animal.

The "taking of a life" is not something Islam takes lightly. There are strict conditions to be met for the sacrifice of an animal. The cow or sheep should not be near any other cow or sheep that is being sacrificed; they should not be able to hear the cries, nor smell the blood. They should not be frightened. There are also strict guidelines about what kind of animal can be sacrificed. It has to be at least two years old, cannot be pregnant or a nursing mother, and must be in good physical health. 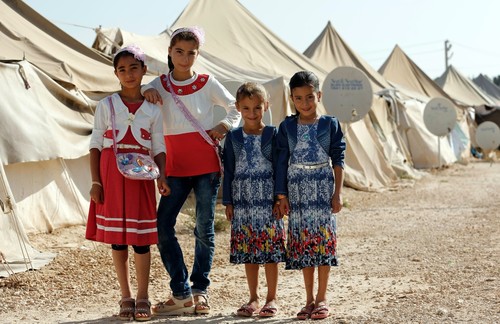 Syrian refugee girls pose with their new clothes at a refugee camp in Şanlıurfa on Aug. 21, the first day of Qurban Bayram.

The idea that the Qurban Bayram, can be modernized by making it symbolic makes very little sense if one understands where the festival comes from. The Qurban Bayram is a celebration of Prophet Ibrahim's willingness to sacrifice his son Ismail at the command of Allah. Prophet Ibrahim's submission to the will of Allah was sufficient, and Ismail was spared, to be replaced by a ram. The devout Muslim's the sacrifice of a sheep, cow or camel is symbolic of this total submission and trust in Allah. To symbolize it further would only rob the Bayram of its true meaning, and would leave it as powerless and meaningless as the pine trees erected in Turkish living rooms to mark the New Year.

However, the bayram is not just symbolic. Unlike Western holidays, the festival has an inherent charitable aspect that should not be sacrificed in the name of symbolism. The sheep, cows and camels that are sacrificed during the festival do not go to waste. The entire point of the sacrifice is to feed the community. 1/3 of every animal sacrificed goes to the family of the person payin​g for it, 1/3 goes to feed any visitors who come to their home and 1/3 is distributed to those in need.

However, as people in Turkey are getting more affluent, many households find that they need to sacrifice more than one animal. Women have jobs, earn money, and have sufficient income to make their own sacrifice. Children grow up, earn money, and while still living at home have

to sacrifice an animal in their own right. Instead of sacrificing a number of animals, what Turkish people are doing is sending money to reputable charities or organizations and having the sacrifice performed abroad.

This year, our family sent money to Sadakataş, a reputable charity. On the second day of bayram we received a video of a man reading out our names, and stating that he was making the sacrifice in proxy for us. He was in Tanzania.

This video has huge significance. After many people were deceived by the Gülenist Terror Group (FETÖ) into contributing money for sacrifices abroad, trust in sending money for an animal to be sacrificed in another country was diminished. One of the many heinous crimes of FETÖ was that they collected money for sacrifices from families. These sacrifices, the families were told, would be done in Africa, Central Asia, or similar countries. Yet there was never any record that any such activities took place. Rather, there is clear evidence that FETÖ operatives merely pocketed the money of innocent Muslims, leaving them to believe that they had carried out their Islamic duty.

It is for this reason that organizations like Sadakataş send donors videos. Trust is important, and carrying out an Islamic duty in another's name is a grave responsibility.

When extended families come together the atmosphere buzzes. There are all the in-jokes, the traditions, and a sense of celebration. When our family comes together four generations gather in one room. The participants range from the babaanne, the matriarch who sits purveying all that she sees, to the two-year old girl who runs around giggling and stuffing chocolate in her pockets. It is a time for all to be together. The two-year-old helps the babaanne to walk to the kitchen, so she can see what the gelins (brides - in this context, two separate generations of 'brides') are doing.

The children are as different as their mothers. The top of the pecking order for the children are the eighteen year olds who have recently graduated from high school. Some are getting ready for university, others for a working life. They sit and talk about music, books, social media. Although on the surface, they should have nothing in common but genetic codes, they share so much and are able to converse on so many different levels that watching them is an education in itself.

But all of them sit together and play together. They do this, because like their older siblings, like their mothers, as different as they all are, they have one thing in common. They are family. the differences do not matter. What matters is being together, sharing.

This togetherness, this sharing is reflected in Turkish neighborhoods. In the article about Bolu I commented on the closeness of Turkish houses to one another, and how this made communication easier. But this closeness is not just for the sake of communication, it is to form a community. When you are living in the middle of nowhere, when you find a hospitable spot in an inhospitable environment you build a home. And you look for people to share that life with you. They will probably be your extended family, and thus you will want them as close as possible.

As you drive through central Anatolia this is what you see. There will be stretches of land, flat, hilly or even mountainous, where there is nary a house. Then suddenly, a grove of trees and houses spring up. The houses are cheek to jowl. There is no need for a garden; gardens are Western innovations and luxuries. Fences, which in the English language make good neighbors, are pretty scarce; the only reason one would want a fence is to keep cows out of the crops. No one wants to keep children or visitors out.

Children have common play areas to play in. This might be the school playground, it might be a field, it might be a street. But they do not need a front or back garden to play in. Neighbors meet to have tea in front of the mosque, or in the coffee shop. Women meet at the market, or visit one another's kitchens. There is no need to knock on the door. In the Turkish village, you walk straight in. Even in the city, on bayram, the street doors to apartments are all left open, so people can walk in and visit more easily. Houses and life in Anatolian Turkey are designed so that people can live together, can share and can be a family. A family with all its foibles, its feuds and other peculiarities.

Every village has a yayla - pasture/plateau - where they take their livestock to graze in the summer. Going up to the yayla in Anatolia last week, we were struck by the beauty, the tranquility. The houses are of a superior nature to the houses in the village, and every house has a garden. In the village, the houses all resemble one another, probably due to the fact that the entire village pitches in to build each house. But on the yayla every house has a unique character; the houses and gardens here present the character of the owner much in the way that a Western house does. But life in the yayla is so different from life in the village. In the yayla you are outside all day, your windows are open. It is like a summer-home, but a working summer-home. The owners have more time to build their homes; they can take time to add individual touches and flourishes.

Whether the village or the yayla, homes and life in Central Anatolia are very different from that in the West. There are two proverbs which sum up this different attitude to family and neighbors. In the West, it is said that good fences make good neighbors. In Turkey, it said that you should choose your neighbor not your house. Proverbs so often tell us a great deal about how a people think; if one wants to understand the Turkish attitude to community, it is all laid out for you to see in the land and in the language.