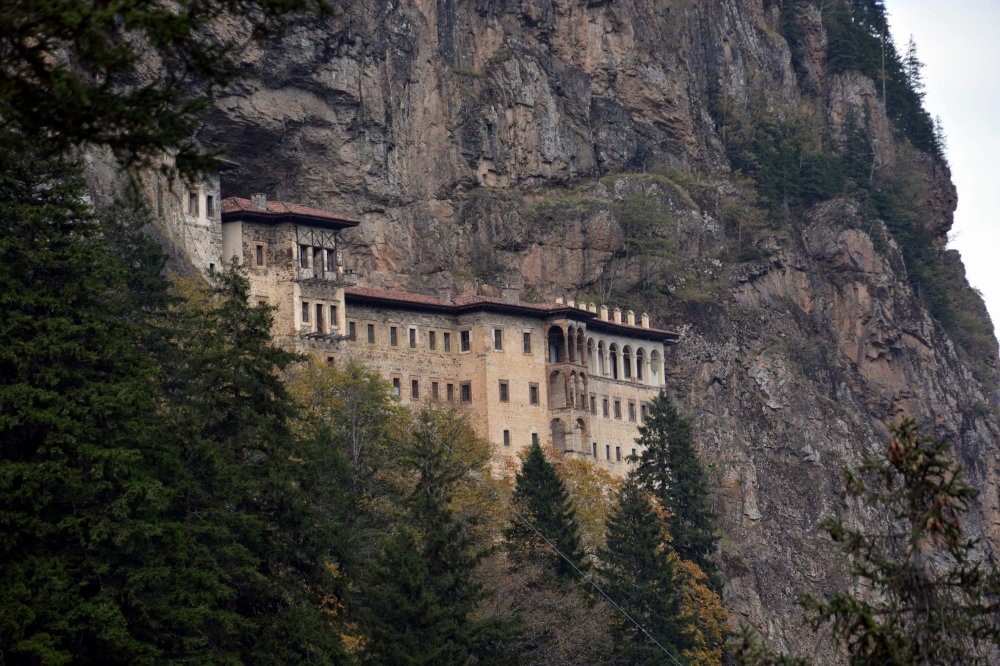 Nested on Mela Mountain and recognized by UNESCO, Su00fcmela Monastery is getting ready to host visitors once again.
by Anadolu Agency Sep 11, 2018 12:00 am

Undergoing extensive restoration for the last three years, the majestic Sümela Monastery is ready to partially welcome visitors by the end of the year

The Sümela Monastery, which is on the UNESCO World Heritage List, is one of the leading touristic locations in the Eastern Black Sea area.

Located on the foothills of Mela Mountain in Altındere Valley of Trabzon province's Maçka district, the monastery presents nature, history and culture to its guests.

Drawing the attention of local and foreign tourists with its unique view and tourism alternatives, the monastery also offers different opportunities, such as trekking, mountain biking, paragliding and photo safaris.

Having been registered on the Tentative World Heritage List of UNESCO in 2000, the Sümela Monastery sparks the interest of local and foreign tourists even if it is closed due to restoration and rehabilitation works. Tourists that come to the region can watch a 3D introduction to the monastery while visiting the Hagia Varvara Monastery, situated on the path going toward Sümela. They can also see Sümela Monastery from different angles from the observation terrace of the Hagia Varvara Monastery. 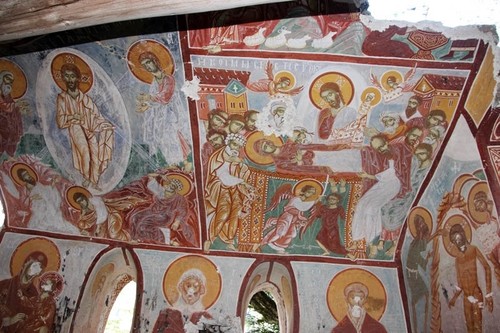 The frescos were discovered in the chapel which stayed hidden until last year and unearthed during the restorations.

Around Sümela where indigenous products of "kazaziye" and "telkâri," a kind of jewelry-making technique, are exhibited along with historical and natural beauties of the region, people can taste traditional foods, including fish, meatballs, corn bread, yogurt and butter.

A cable car is going to be installed soon to provide easy transportation and present a different journey to tourists and solve the traffic problem in the area.

Ayvazoğlu added that the Trabzon Metropolitan Municipality had a cable car project planned for Sümela Monastery and that the cable car would revive even more interest in the monastery.

Although there is huge touristic interest in this historical monastery, it has been under much-needed restoration since September 2015. Restorations started in 2016 and have continued to date. During the restoration a chapel was also discovered which was only accessible through a hidden passage.

However, the restorations did not affect the interest of the guests neither their visits.

"When visitors see an opportunity to see this incredible structure, they take every chance they have even if it is just a peek," said Provincial Director of Culture and Tourism, Ali Ayvazoğlu to Anadolu Agency (AA).

Before the monastery went under restoration, it hosted almost 500,000 guests annually including 100,000 international tourists. Although the building has been closed for three years, in the first eight months of 2018, the Sümela Monastery hosted 300,000 tourists. "It is highly possible we will be able to welcome 200,000 tourists by the end of this year," said Ayvazoğlu.

He said that they want to make people spend more time in Sümela and see the points which have been closed to visitors, even if people are allowed to enter the monastery, by completing the restoration in the quickest possible time.Explaining that they try hard to make the monastery more attractive, Ayvazoğlu added, "Minister of Culture and Tourism, Mehmet Nuri Ersoy stated that they plan to open Sümela Monastery to service quickly when he visited Trabzon. In this line, we conduct our works together with the Regional Directorate of Surveying. I hope, we will open Sümela Monastery to our visitors."

He indicated that a there was a perception that the monastery was already open, however he explained: "We completed the first section but everyone thinks we opened all parts. However, there is no situation like this. We only cleaned the dangerous rocks in the first section; the restoration [...] still continues. Therefore, the first section can be completed in a month or so. Then, works will continue in the other sections quickly."

Remarking that they will present a detailed report about the works in the monastery to Ersoy, the provincial director said, "Our aim is to introduce the monastery to tourism after the works and to make Trabzon increase its share in tourism, which is the main source of revenue, by increasing the number of foreign visitors. Therefore, Sümela has cultural value for us."