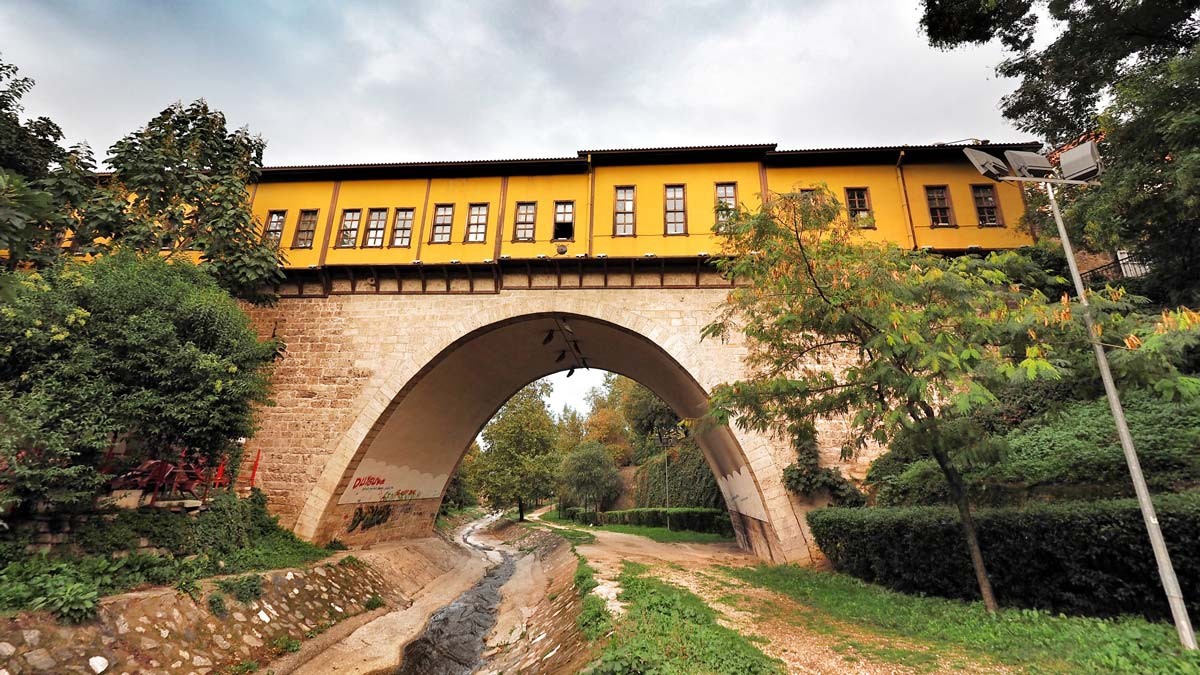 With its traditional folk arts workshops, the 576-year-old Irgandı Bazaar Bridge, which has witnessed the history of Bursa by resisting natural disasters and wars for centuries, is one of the destinations frequented by local and foreign tourists

Having been built in 1442 over Gökdere, the historical Irgandı Bazaar Bridge in Bursa province connects the central Osmangazi and Yıldırım districts of the city and is home to artificer tradesmen who offer the finest examples of handicrafts from mother-of-pearls to ceramics.

Raif Kaplanoğlu, a board member of the Bursa Research Foundation, said there are different stories about the history of the bridge.

Kaplanoğlu stated that the bridge was told differently by Evliya Çelebi and Kâtip Çelebi, adding, "Rumor has it that, during the reign of Orhan Bey, when a warrior struck his sword on the rocks, where the bridge is located today, upon hearing some sound, thinking that it was the enemy, a treasure emerged. The warrior took this treasure to Orhan Bey who said that this money belonged to the man himself and suggested to do an act of charity. Upon this, the warrior had this bridge built."

Kaplanoğlu noted that documents regarding the bridge say different things, continuing, "This bridge is a foundation and the date of this foundation's establishment and building is clear. According to our records, the Irgandı Bridge was made built by a merchant named Hodja Muslihiddin in the 1440s. The bridge is named 'Irgandı' because Hodja Muslihiddin came from Iran's Irgandı and is known as 'Musliddin from Irgandı.'"

According to Kaplanoğlu, the Italian cities of Florence and Venice and Bulgarian city of Lovech have bazaar bridges as well.

"Actually, there are four instances of this bridge in the world, but one of the oldest ones is the Irgandı Bridge. When it was first built, it was a stone structure that was completely covered from above. In other words, it is much more magnificent than those in Italy and Bulgaria. Travelers who came to Bursa years ago definitely made an engraving of this bridge because it was the most important and valuable work they saw in Bursa. At the same time, the first photograph taken in Bursa is related to this bridge," Kaplanoğlu explained.

"The first Bursa photo featuring the bridge was taken by a person who came to the city in 1854. In the earthquake of 1855, the upper part of the bridge, namely the store section, was destroyed. In fact, there are 33 stores on the bridge, and these stores are generally cotton fluffers and known as the 'Cotton Fluffers Bazaar,'" he added.

"Under the bridge are two big stables and warehouses. Now, these warehouses are standing very firmly. The stores in the bazaar continued for many years as foundation income. In the 1855 earthquake, these shops were demolished and were rebuilt as we see it today. Therefore, the bridge was restored in 2002 after the earthquake. So, it is not the original form which was much more magnificent," he said.

Recalling that the bridge was later bombed during the Greek invasion, Kaplanoğlu stressed, "The Greeks bombed bridges as they left here during the invasion and a section in the middle of the bridge broke. In 1942, the bridge was completed and opened to pedestrians. The bridge was finally restored in 2004 by the Osmangazi Municipality and opened to service in its current form and it now operates as a bazaar where traditional folk art workshops are present."

Özyıldırım explained that various demolitions took place on the bridge over the years, saying, "The bridge was restored and made usable by the municipality in 2004. We consider our bazaar to be a very important part of the city in terms of tourism."

Pointing out that the bridge attracts attention with its historic fabric, Özyıldırım noted, "Our bridge has a very nice architectural structure and a very warm atmosphere in the shops inside. We take great pleasure in bringing domestic and foreign guests and tourists here. In these stores, our craftsmen perform traditional folk arts. Our municipality has allocated them for use in return for a very small amount of rent. We have about 20 stores here. There is also an increasing trade formation around it. We hope that the connection of this bazaar with the other historical bazaars and inns becomes healthier."

Özyıldırım added that they attach great importance to the 4th Irgandı Bridge International Art Days event, which is scheduled for Oct. 12-14 this year.