Search and rescue dogs sniff to save lives 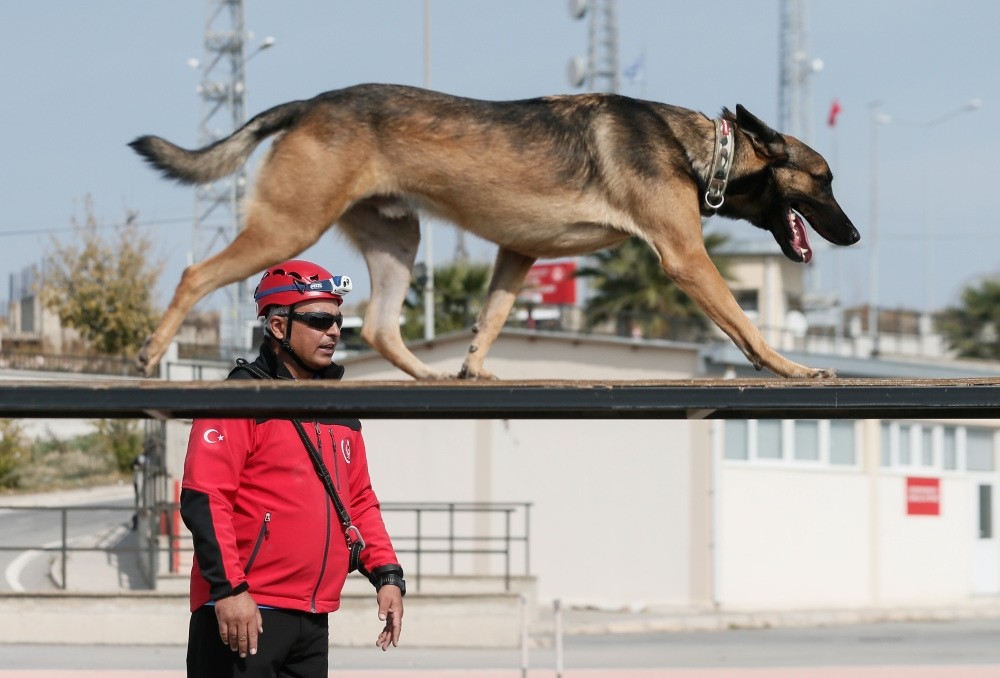 Search & rescue dogs are trained for two years to be fully equipped for a mission. Although they are cute, they don't hesitate risking their lives to save others. The photo taken at the training center in u0130zmir shows one of the dogs with his trainer.
by Anadolu Agency Dec 13, 2018 12:00 am

Dogs are said to be man's best friend but they are also an important asset in search and rescue missions with their sensitive noses. Although you might think it is their natural instinct to sniff and find, it actually takes a lot of training to get a dog ready for rescue work

In the event of a catastrophe, whether it is natural or man-made, search and rescue dogs play an important role in saving lives, thanks to their hypersensitive noses. However, these animals go through intensive training in order to learn how to detect human scent and how to search for them in case of an emergency.

Search and rescue dogs are obedient and also very playful, but when disaster strikes, they don't hesitate to risk their lives for the sake of others. Special training makes search and rescue dogs valuable assets in rescue efforts such as wilderness tracking and locating missing people resulting in thousands of human lives being saved every year.

İbrahim Yılmaz, 41, has been training these adorable heroes for 17 years in İzmir. He dedicates two years straight on a single dog to train it for any disaster. 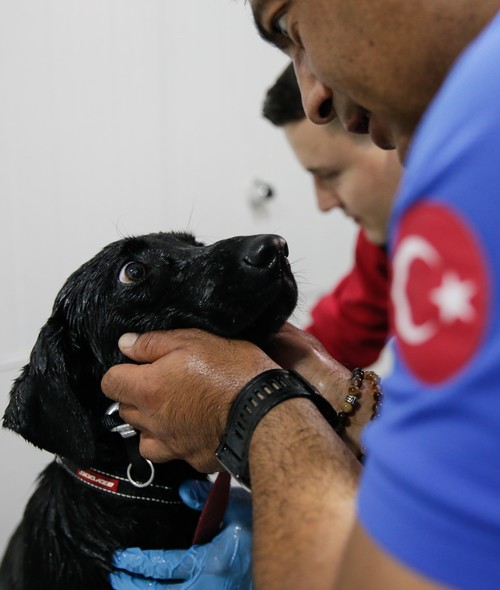 One of the dogs in training spends some quality time with his trainer at Izmir Metropolitan Municipality's training center after a nice bath.

Yılmaz quit his job in the tourism sector after seeing firsthand how important search dogs were in saving human lives during the 1999 Marmara Earthquake. He was recruited as a trainer candidate on the dog search team within the body of the İzmir Metropolitan Municipality. Performing his new occupation with love, Yılmaz started to work with puppies by completing his professional training at home and abroad.

Yılmaz, who prefers 3-week-old Labrador and Belgian shepherd puppies, says he looks for important criteria such as leaving a track, using the nose, sensitivity to commands and socializing with animals and people.

Puppies which are successful in leaving a track after the training, which is provided by Yılmaz for eight hours every day, receive other difficult training stages one month later. In order to strengthen his bond with the dogs, Yılmaz gives "obedience training" first. In the second stage, "direction in wreckage" and then "basic barking" practices are provided. Yılmaz also offers "agility" training to them so that they can move comfortably in wreckage. During practical training, Yılmaz has dogs perform rescue activities in simulated wreckage in specially designed scenarios. He does not ever let the dog leave his side, whether it be at wreckages, on training tracks, or at night. Yılmaz sleeps together with his dogs like they are his children.

The dog that successfully passes all stages of training is then subjected to the certification exam of Turkey's Disaster and Emergency Management Presidency (AFAD). Those who are successful in the exam are recruited as certified search and rescue dogs while dogs who fail are trained for one more year.

Yılmaz has trained 10 certificated search and rescue dogs to date, and three of them made many people hold on to life again by taking place in the searches of the Van earthquake and the mine disaster in Soma.

Speaking to Anadolu Agency (AA), İbrahim Yılmaz said that dog training is difficult but joyous. Yılmaz explained that every dog does not meet the criteria for being a search and rescue dogs.

"Dog search and rescue teams are involved in the search from the first stage to the last. This is why training is very important. You need to make your dog practice for eight hours a day with a good planning. This job is a big responsibility because you are in this work to save people. In the wreckage, everyone searches in line with the information that they get from you. For me, making a mistake with your dog is a professional offense," he continued.

The trainer recalled that in 2011, they pulled a 12-year-old child named Serhat from the wreckage in Erciş district during the Van earthquake after 54 hours with the guidance of a dog called "Şans" (Luck) which he trained. He stressed that it is not possible to express the happiness he felt due to the success of Şans and rescuing of the boy.

Explaining that the dogs that he raised are very emotional, Yılmaz stated, "Since I took and trained them at a young age, they became like my children. I sleep with them like a child or a baby as they are open to all things in the first periods. A strong bond occurs between you and dogs. Dogs understand the problems you experience at work or home. If you are not in the mood, it might not be right to work with a dog."

Yılmaz indicated that his only sadness is that Şans passed away last year.

Firefighter Ermen Demirtaş, who has been working as a dog trainer for three years on the search and rescue team, said that he learned many things under the guidance of Yılmaz.

"He is one of leading trainers in Turkey," Demirtaş said.