Macron is suffering a nightmare with eyes wide open 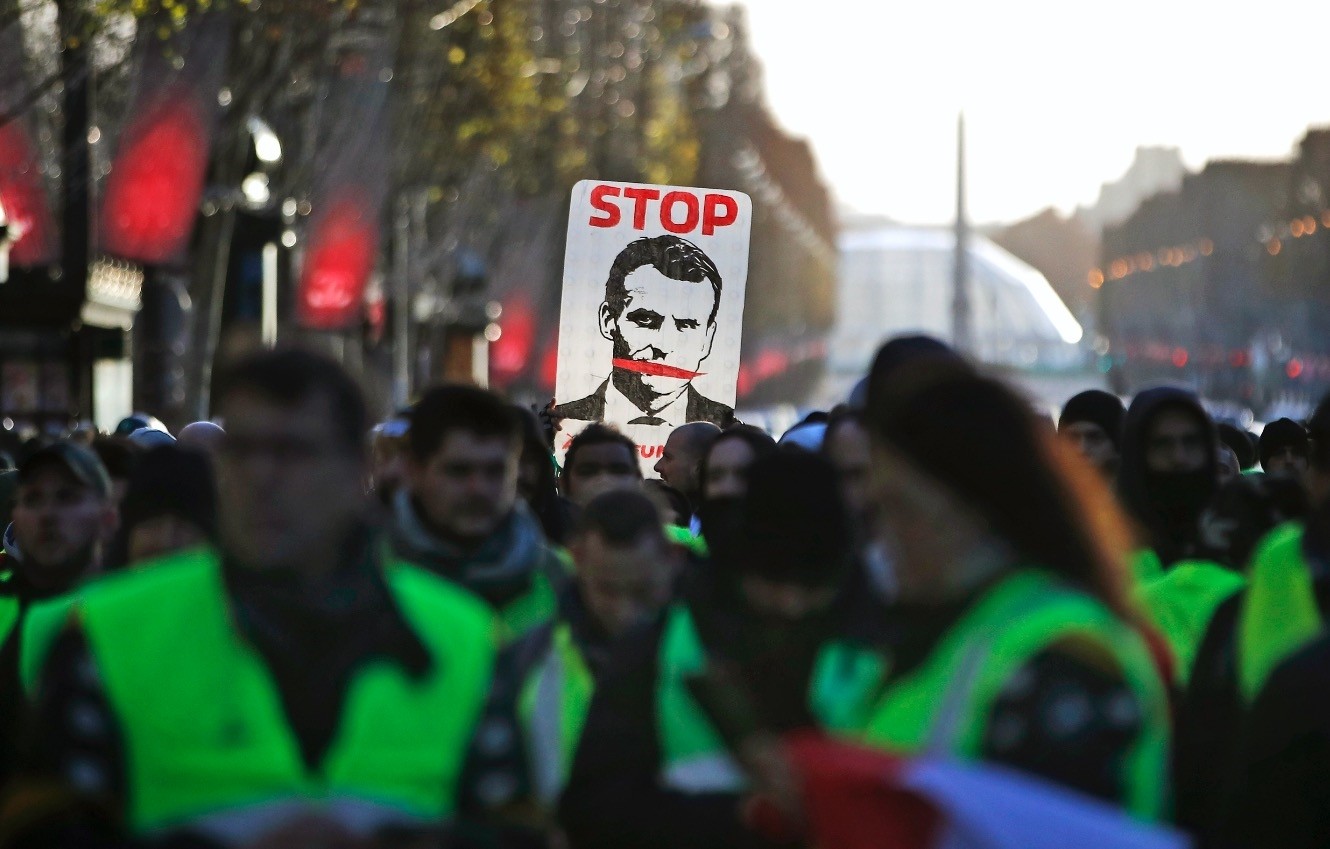 Ignoring calls by the French authorities to hold off, thousands were still on the streets for the fifth weekend of the ‘yellow vest' protests, albeit in noticeably smaller numbers. President Emmanuel Macron may be waiting for the end of the nationwide demonstrations, and yet for a French teacher living in Turkey, who keeps a close eye on what his country is going through, this is only the beginning

In the last week of April 2017, when he was a candidate looking for ways to rack up millions of votes in the presidential race, Emmanuel Macron made a risky move. A notebook before him, he held a meeting with representatives of Whirlpool's tumble-dryer plant in his hometown of Amiens in northern France ahead of the elections in May.

The company was planning to shut the operation in the country and move to Poland, which would amount to the loss of hundreds of local jobs. Hanging on the representatives' every word, Macron seemed to be making much effort, taking down notes, or maybe just doodling a stick figure with an "Oh god, please help me" expression on its face.

While "the bourgeois" candidate, as Macron himself put it, sat for a meeting with union leaders, his rival Marine Le Pen was outside the company, mingling with the big crowd of workers booing Macron amid the billowing thick smoke of burning tires.

In the meeting room, a question came to the thoughtful Macron from one of the representatives: "Why didn't you come out to meet the workers in the parking lot? Not today but a month or two ago?"

That behind-the-door meeting was a scene from the Netflix documentary, "Emmanuel Macron: Behind the Rise," on the French candidate's campaign period. As the documentary shows, Macron made that high-risk move of offering an on-site meeting with workers.

He told a couple of members of the "En Marche!" campaign team, half jumpy and half self-assured, "I can't look like I am hiding. We have to take risks," and then he gave the gist of the whole move, with which he might have garnered enough support for his campaign: "We have to go to the heart of the fight, every time."

The enthusiastic candidate went out to talk with the workers, had it broadcast live on Twitter and took all the credit Le Pen aimed to chalk up, no matter how tense the atmosphere turned.

After a few months following his swift rise to the presidency, Macron visited the Whirlpool dryer factory taken over in September by a local industry group that wanted to maintain most of the jobs. The risky move he made prior, gave him some credibility in the eyes of the workers, albeit for a short period of time.

Now, only a few months later, neither Macron nor the French workers are as hopeful as they once were. The 40-year-old head of state is facing his biggest test yet, the impacts of which may resonate for decades. This "fight" is much harder for Macron, pale by comparison to the Whirlpool incident.

Today's Macron has a home truth to face: The growing "yellow vest" protests are too big to handle with a single exchange. Despite concessions Macron made the previous week, France saw a fifth consecutive weekend of "gilets jaunes," or yellow vest, protests last Saturday.

Apart from French protesters' first-hand experience of the unending cascade of nationwide demonstrations, which have already filled the pages of many newspapers, I talked to a French teacher living in Turkey, in the capital city of Ankara, to learn what one would exactly feel while watching his or her house burn to the ground from afar, so to speak.

Wishing to keep his name anonymous, the French teacher sounded like the right person to talk to about the scale of the protests that are now spreading across Europe like a brush fire.

"In the beginning it was a bit confusing. This movement at first was mostly popularized by far-right politics," he said.

According to the young teacher, just because the protests were instigated by the far-right, a lot of people from the left-wing, even though they were also quite against the government and increase of taxes, were not in favor of taking part in the protests.

As the recent figures prove, however, the demonstrations expanded rapidly and evolved into France's worst urban riot in a decade, posing a dire challenge to Emmanuel Macron's presidency.

Given the aphorism, he uttered during the Whirlpool incident, could Macron, the youngest person to assume office in France, really go to the heart of the fight every time?

In the toughest test Macron has yet faced, around 136,000 people have taken part in the ongoing protests across France, including 10,000 in Paris. More than 1,400 people have been wounded, 46 seriously, and a sixth protester died after being hit by a truck at a protest roadblock last Thursday. Over 1,709 were arrested, of which 1,000 were in Paris. More than 100 remained in custody, according to authorities that spoke to Reuters.

"It really struck my interest when I saw the number of people that were actually protesting and also how violent these protests had become," said the French lecturer, who is younger than Macron and probably less hopeful than him about the country's future, particularly when it is under the rule of a man doing his utmost to play the hero.

FRANCE, A COUNTRY OF PROTESTS

The violent protests are definitely not incidental to Macron's presidency. The culture of protesting in France matches the nation's history. Like Louis XVI during the French Revolution in 1789, now Macron is caught in an avalanche of the society's anger, although of a pretty different magnitude.

"Protests in France are mostly situated with opposition to the government, and most of the time they are encouraged by a union or a syndicate," the teacher said and added that the yellow vest protests have been a little bit different this time since they are strongly being held by the common folk.

Do the yellow vest protests only stand as a movement against the fuel tax increase? Most of the readers would agree with the French teacher, who gave an obvious and immediate answer of "no."

During the first day of the protests on Nov. 17, people were maybe only protesting the tax increase until it mutated into a revolt against living standards and Macron's indifference to the hardships of the poor.

"A lot of people perceived it as a general attack against the poor by a very ultra-liberal government," said the teacher with a serious tone. "People are just protesting more generally about the politics of Macron."

Called by a considerable segment of French society as "the president of the rich" due to his elitist disregard for the working and middle classes,

Macron seems to have never underlined this one deep sentence of "Les Misérables" by the great French novelist Victor Hugo: "There is always more misery among the lower classes than there is humanity in the higher," or perhaps the maxim of "The paradise of the rich is made out of the hell of the poor," from another Hugo novel, "The Man Who Laughs."

Macron once told his campaign team that he can't look like he's hiding, and the same Macron appeared on French television last week for reasons beyond his control, as the phrase goes. He announced an income increase for minimum-wage workers and tax cuts for some pensioners and overtime workers to quell weeks of violent protests. But was that even enough to go on with?

According to an OpinionWay poll for LCI television, 54 percent of French people want the yellow vest movement to end after Macron's speech, which was watched by over 21 million people, while the public's support for the movement was around 70 percent before his speech where he promised billions of euros in aid for the lowest earners.

"He actually succeeded, which makes me quite sad, in calming down a part of the protesters, who in my opinion did not really understand what these measures would imply," said the educator, keeping his suspicious tone.

Macron's concession includes a 100-euro increase in the minimum monthly wage, an end to taxes on overtime work as of Jan. 1 and the cancelation of the intended tax hike on pensioners with incomes less than 2,000 euros per month. He also asked profit-making companies to give workers tax-free year-end bonuses.

However, Macron declined to reinstate the Solidarity Tax on Wealth (ISF) – imposed on taxpayers with assets worth more than 1.3 million euros – which his government scrapped in September last year.

For the critical teacher, and mostly probably for the 46 percent in favor of the continuation of the protests, "What Macron did was something that entrepreneurs in France have been wanting for some time, which was to decrease the indirect salary of the workers, make them earn less just giving them more direct salary, completely cutting their social security and whatever comes after."

Even though Macron made a U-turn with the measures he announced, the yellow vest wave is not big enough to remove him from power.

Skeptical of Macron's policies, the French teacher believes, by defining it as some sort of wishful thinking, that "Maybe at some point these protests will trigger a social approach to the issues that are hurting the country for so long such as employment, general precariousness of the poor workers, of young people, and of the people in rural areas and suburban areas."

In the French teacher's opinion, the protests will not stop any time soon. He believes fewer people will attend, but they will become even more violent. The fifth Saturday's protests in a way supported his estimate since the French press quoted authorities as saying that 33,500 protesters turned out nationwide, less than half the number of the previous week.

As to the short-term cost of the protests, they have damaged France financially, as predicted. Reservations in Paris hotels, for instance, are down for December, with an estimated 35,000 nights canceled so far.

More importantly, the country will have slow growth to close to a standstill in the final quarter, according to estimates by the French Central Bank. The eurozone's number two economy, France, would eke out growth of only 0.2 percent in the quarter from the previous three months, down from 0.4 percent in a previous estimate, the central bank forecast.

A former investment banker himself, Macron now apparently wants to prevent any further negativity to his country's slow growing economy.

But as long as the protests continue, his wish will remain as a pipe dream, especially, as the French teacher points out, when there is this possibility that "poor workers all over Europe, who suffer from liberal policies, would obviously find it as a good opportunity to start scaring the government like the yellow vest is doing in France."