New Year's Eve celebrations: A gateway to past and present 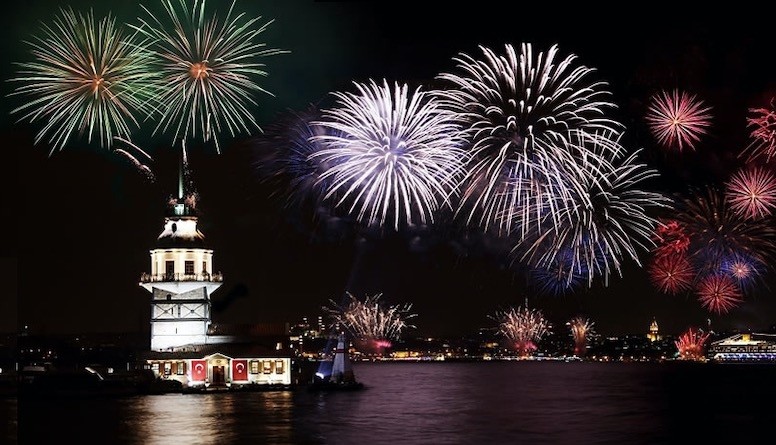 Fireworks are set off near the Maiden Tower over the Bosporus as a part of New Yearu2019s Eve celebrations.
by SİMAY KESKİNTEPE Dec 31, 2018 12:00 am

Celebrations vary from country to country and have changed throughout history, but there is one thing that is common in every tradition: Welcoming the new year with hope

Celebrating the new year on the night of the December 31st is the best treat and one that we are looking forward to every year. All these New Year's decorations; pretty and sparkling ornaments, fireworks, colorful lights and a perfect dinner table to welcome the new year with your beloved ones. This festive mood at every step is such bliss!

New Year's tradition not only brings families but cultures and civilizations together as well with the promise of a new beginning that fills us with hope and gratitude. New Year celebration traditions change from culture to culture and are passed on from one generation to another for ages. This year, I wanted to think out of the box and celebrate the new year like I never did before. So, I decided to go on a hunt and talk with my friends from all over the world and take some tips and learn more about their New Year's traditions. They all surprised me; some are delicious, but mostly fun and they are all intercultural and vary from country to country.

There is a saying in Turkish, "tatlı yiyelim, tatlı konusalım" (Let's eat sweet and talk sweet). Apparently, that's how Germans think about New Year celebrations. Eating "krapfen" or filled doughnuts is the way Germans open their arms to the new promises of a new year. Well, what a great way to step into the new year! In China people p

aint their front doors in red - as it is the happiest color in the East - for good luck; while Brazilians offers white flowers and candles - meant to appease the Goddess of the Sea as a blessing to mothers and children; in Turkey, we throw pomegranate seeds as it signifies wealth and prosperity.

If we have a look at the essence of these traditions, they are prayers and the vows for hope, fertility, health and for a beautiful future. Whether you throw furniture from the window like people from Johannesburg do - the most extreme tradition to be honest, it is not common anymore as it can be so dangerous and hazardous - or white flowers into the ocean, actually all of them practically signify the rebirth and regrowth in all folks more than at least four millennia. Whether it is instinctive or from the nature of the human, one has always turned to an admiration for the glories of the nature and celebrated it. Those celebrations have become a tradition in time, of course.

If we go back in time to see why and how the Turks celebrated the new year, it actually reveals the meaning of the new year is directly related to the nature and rebirth. The sun was very important for the Turks in Central Asian steppes. For Turks living in the Central Asia back in the day, the new year started on December 22, a day after the longest night of the year as the sun becomes more and more visible for the earthlings. According to pre-Islamic Turkish beliefs, on December 22, night and day enter into a war. After this long battle, the day comes out victorious by beating the night. In other words, the days begin to be longer, the sun begins to show up more. The Turks were celebrating this victory of the sun, in a sense of the rebirth, with great joy, with great festive under the tree of the "Akçam," a symbol that is mostly associated with Christianity and Christmas today.

The pine tree tradition blowing from the east has been moved to New Year's Eve after a different habit in Europe. The belief in the blessing of the tree, which was common among Europeans, who adopted a pagan faith before Christianity, was transformed into the decoration of the trees after the Christianity.

The tradition is also known in the Christian countries as Christmas - the New Year or Holy Birth - which is celebrated as the birth of Jesus on December 25th. Christmas is celebrated in many societies with no religious content, only for entertainment gifts and a new year, celebrated with joy and enthusiasm by non-Christian societies.

As in our tradition today, people clean their homes for this holiday, wear beautiful clothes, sing songs and play around the tree. Grandparents are visited; families eat the special dishes they made together, because it was believed that when all the family and friends came together and celebrate, life would multiply and bring good luck.

I still think that we celebrate the new year with the same spirit. Even though we do not celebrate the length of the days in a festive mood, in fact the traditions of the new year still bring new hopes and unity from nature to humanity. I think that sharing this hope and blessings with those who need support, or those who are hungry and those who need hope, can be the most beautiful gift of the new year, or even a tradition. The sun is born for all of us, the days shorten and grow without separating the sphere. So why not to stay close to each other without any boundaries such as race, language or religion? That is my wish for all of us: to be better people, at peace with ourselves and willing to embrace others and their traditions.