Leave your worries at home: Heal your body, soul in Denizli's hot springs 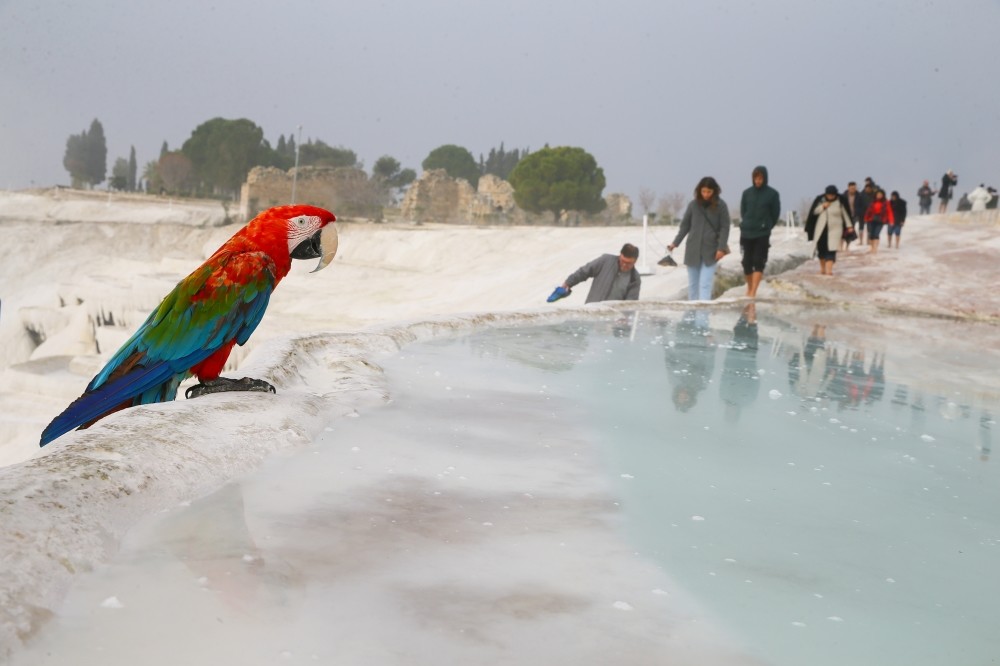 With its white travertine, thousands of years of history and scenic beauty, Turkey's Aegean province of Denizli is becoming a focus of interest for those looking for a cure in the mineral-rich thermal pools during the winter break

Denizli, a key tourism center for the country in the southwest, offers dynamic winter tourism for vacationers with activities such as paragliding, skiing and hot air balloon fights.

Visitors can find numerous tourist attractions in ancient cities, caves and waterfalls, as well as a chance to taste local delicacies and shop in the historic bazaars.

In the city, which has been a unique thermal therapy center since ancient times, hotel occupancy rates have reached a 90 percent with the high demand for thermal spring waters.

Located in Denizli, the "white paradise," Pamukkale (Cotton Castle) - a UNESCO World Heritage Site - is among the most popular tourist attractions in Turkey.

One of the oldest tourist attractions in Turkey, Pamukkale is also a key landmark of the city.

Standing over the ruins of the ancient city of Hierapolis, Pamukkale has been known as a thermal therapy center for millennia since Roman times, and especially famous for its white limestone travertines, shaped by calcium-rich hot springs.

The hot springs allow visitors to walk barefoot on the travertine terraces without making them feel cold, thanks to the temperature of the water, which remains hot even during winter time and its view offers tourists a unique scene for their pictures. The world-renowned Pamukkale has been visited by more than two million tourists over the last 11 months, which is an all-time high. It is most popular among tourists from Europe, the Far East, Latin American countries and Russia.

Gazi Murat Şen, the president of a Denizli-based local tourism and hotel management association, told Anadolu Agency (AA) that occupancy rate of hotels in Pamukkale has already reached 90 percent thanks to the upcoming semester holiday.

Stating that domestic tourists mostly prefer places with thermal waters and skiing centers, Şen added that vacationers coming to Denizli enjoy skiing in the daytime and relax in thermal waters at their hotels in the evening.

He added that Denizli's climate is suitable for vacations throughout the year.

The ancient city of Hierapolis, which dates back to some 2,800 years ago and known as the Holy City in the literature of archaeology for many temples and other religious structures located in it, also entices visitors.

In front of the ancient theater, visitors first meet the "gate to hell," which was unearthed in 2013 and is also known as the "gate to the dead country" in ancient sources.

Cleopatra's Pool - where ancient Egyptian Queen Cleopatra bathed according to a myth - in Hierapolis, gives visitors a thrill of swimming surrounded by a 2,000-year-old column and marble ruins.

The pool formed naturally after the collapse of a series of columns in an earthquake in 692 A.D., which caused thermal water to accumulate.

With its water temperature fixed at 36 degrees Celsius (96 Fahrenheit) regardless of the season, the pool offers its visitors a unique experience. It is believed to have healing benefits for cardiovascular diseases, rheumatism, skin and nerve diseases as well as intestinal disorders if it is consumed.

Thanks to its thermal resources, Denizli has been seen as a thermal therapy center since the ancient times and it still preserves its title.

An important medical center during the Roman era, the city holds a major place in the health tourism with its calcium and iron rich red waters, which also contain different minerals. In the Karahayıt region of the province, where many thermal resources are gathered, the hotels are occupied in winter season by those who want to find a cure in the unusual red water.

The red water - which remains at an average of 60 degrees Celsius (140 F) all year round - is believed to help those with rheumatism, asthma, bronchitis and skin diseases.

Güney, Sakızcılar Asmaaltı and Gümüşsu Waterfalls welcome nature lovers and those who seek peace in nature.

Kaklık Cave, which shares similar views with the travertines of Pamukkale, and Keloğlan Cave, which offers interesting scenes with its stalactites and stalagmites, are among the most-visited places in the city.

Mehmet Ermiş, a domestic tourist from western Balıkesir province, said that he came to the city after watching a program about it on TV.

"The weather is cold but the hot water reduces its effect. When you come to see such a beautiful place, the cold doesn't affect you," he said, adding that Denizli was ideal for winter holidays.