Marching for victory: Wartime preparations of the Ottoman army 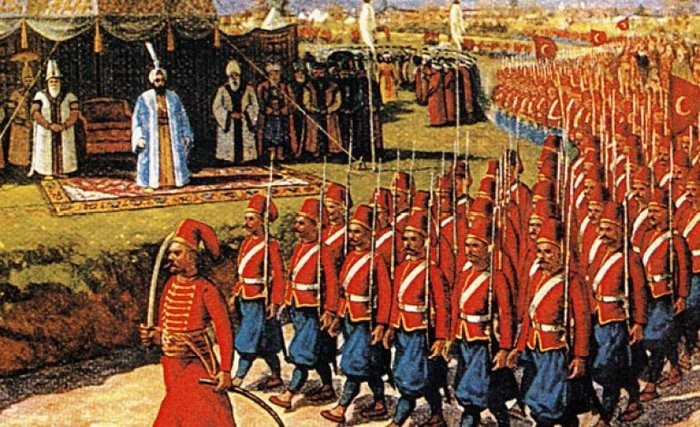 A painting shows the Ottoman army marching in the presence of the Ottoman sultan.
by Erhan Afyoncu Jan 14, 2019 12:00 am

The Ottoman army was considered one of the greatest military powers of its time thanks to its centuries-old military tactics and easy access to vast resources. To gather the necessary forces from all corners of the empire, which spread across three continents, the Ottomans had a system like no other

When the Ottoman Empire decided to wage war, parliament was convened in the presence of the sultan. Everyone was given the right to speak, and information about the army, navy, treasury and the state of the enemy was obtained. When a war decision was made, the tugs (banners) of the sultan were planted in front of the armory. Then, the whole Ottoman Empire took action for the campaign.

Edicts were sent to the Ottoman governors and qadis (Ottoman judges) serving in the cities located in the direction of the campaign in order to decide what to do about the roads and bridges there. The roads were cleaned, expanded, and obstacles on them were removed. They were turned into such a condition that tens of thousands of soldiers could pass through without difficulty.

Damaged bridges were repaired; if there were any destroyed ones, they were rebuilt. In addition to these pre-repairs, the officers who were sent on ahead of the army during the campaign arranged roads, made the swamp areas appropriate for passing and repaired bridges. These vanguards set the signs on the roads they had fixed, allowing the following army to track the correct route.

One of the most important issues was the food need of tens of thousands of people. It was also necessary to provide the feed of the animals that carry the soldiers and weights of the army. Therefore, orders were sent to local managers on the campaign route and necessities were stored in the warehouses at certain points called stopovers.

When there was no war, the grain stores were kept full in case of a possible war. If the food in the stores decayed, it was be replaced with fresh product immediately. Foods that could not be stored were bought along the road. The things that the army needed were usually obtained from the regions on the route of the campaign. If there was a famine in the areas on the road of the campaign, the necessary foods were bought and brought from far places.

The water need of the army was supplied by the Sakalar, a unit in the Ottoman army. The Sakalar, under the direction of Sakabaşı (the head), carried the necessary water with water pouches on horses. Other items that the army needed, such as gunpowder, round shots, horseshoes, nails, tar, felt, sacks, naphtha, iron, torches, fabric and tents, were supplied before and during the campaign.

Horses, mules and camels were used to carry the weight of the army. Carriages would not be used too much because the roads were not suitable. Carriages and working animals were bought and they were also rented sometimes. In addition, rivers, such as the Danube, Euphrates and Tigris, were also used. The necessary materials were transported by ship through the Black and Aegean Sea.

Gun carriages were used to carry cannonballs, the most important weapons of the army. In the Ottoman Empire, there was a unit called Top Arabacıları Ocağı (Gun Carriage Men) to do this work.

The troops of the Ottoman army were present in different parts of the country. In the center, there were only some of the Kapıkulu the soldiers, the household troops of the Ottoman sultans. It was ordered to commanders of tımarlı sipahiler (Ottoman cavalry), which were called alaybeyi and çeribaşı, by edicts that they had to join the army.

There were artisans and craftsmen brought from various cities, especially from Istanbul, in the Ottoman army. They were called "orducu esnafı" (army craftsmen) or "orducu." There were all kinds of craftsmen in this group. According to the direction of the campaign, the otağ (a Turkish tent) of the sultan was pitched in Davutpaşa in Rumelia and Üsküdar and Gebze on the Anatolian side and the troops were gathered.

An army could advance 15 kilometers in a day in the 16th century apart from the time that was necessary for them to satisfy their resting and logistic needs. In all seasons of the year, it was not possible to campaign. A military operation began in the spring and ended in the early autumn. This was nearly six months. The army, which went to enemy territory, had to return to the center during the campaign season so that they would be safe, fulfill their food and supply needs without any difficulty.

If the army was still in enemy territory after the end of the campaign season, they would perish with the start of the rainy season.

Daily-cooked food service instead of dry food was important in terms of the nutrition of the soldiers. Meals were cooked twice a day. The main ingredient of these meals was mutton. Beef was not of interest too much in this period. In a one-year campaign, nearly 100,000 sheep were needed. Besides for this, soup with rice and bulgur and rice pilaf were cooked.

Count Luigi Ferdinando Marsigli, who was a captive in the Ottoman army for a long time, implies that every soldier received 320 grams of bread, 160 grams of hardtack, 200 grams of mutton, 160 grams of rice and 80 grams of oil.

Bread, one of the most important needs, was supplied in two ways. The orders were sent to the places where the army would pass through, and necessary bread was baked and prepared there. When situation and time were appropriate, they were baked in ovens in the army. However, hardtack was preferred much more because normal bread did not stay good for a long time. In the warehouses on the campaign road, there was always hardtack. Hardtack was stored after being baked and it stayed good for a year.