Last Levantines of Turkey working to keep their culture alive 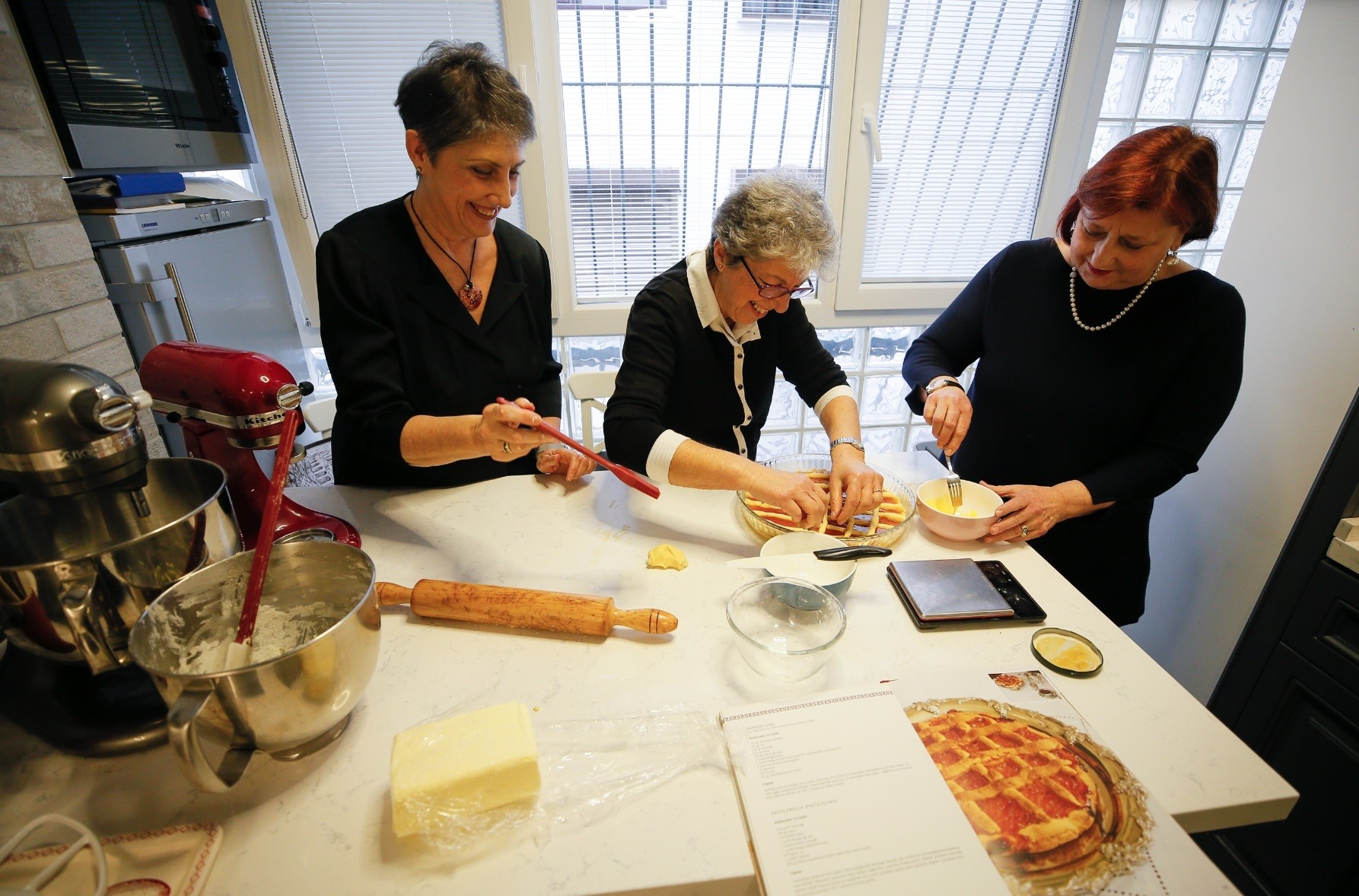 Lotte Filippucci Romano (R) and Ingrid Braggiotti cook one of the recipes from their cookbook u201cTraditional Recipes of the Levantine Cuisine.u201d
by Anadolu Agency
Jan 28, 2019 12:25 am

Decedents of Europeans, who migrated to the Ottoman lands centuries ago, is one of the most important parts of Turkey's cultural mosaic but due to their decreasing numbers, the Levantines work hard to preserve their culture for fututregenerations

The Levantines, the last representatives of Europeans who have settled in the Ottoman lands centuries ago, and a culture unlike any other in the world, are working to keep their culture alive with theater, books, culinary arts and sports. According to historical resources, Europeans – most of whom were British, French and Italians – started settling in Ottoman lands to engage in trade, especially following the Tanzimat period.

Hundreds and thousands of these families settled in Ottoman territories and they were referred to as the "Levants," meaning where the sun rises. It is derived from the French word "Lever" (Easterners) arrived in Istanbul and İzmir sometime between the 1500s and the 1700s. They engaged in huge cultural exchanges with the local Turkish populations.

The Levantines, whose numbers rapidly increased, especially in İzmir, did not only engage in trade but organized the first theater plays in Anatolia, founded the first football team, played tennis, established friendships and even opened the mansions they lived in İzmir to Mustafa Kemal Atatürk following the city's liberation from the Greek invasion in 1922.

The Levantines, referred to as "Easterners" in the West and "Westerners" in the East, and according to some are "stuck between the two," have become the living examples of cultural synthesis in architecture, art, sports and trade.

However, the population of Levantines in İzmir once around the level of tens of thousands has significantly dropped over time, due to younger generations preferring to marry Turks in the 21st century or choosing to live in other countries.

The number of Levantines in İzmir today, who speak Turkish with their unique accents but also know at least three languages, has dropped below 300.

The last Levantines who do not want Turkey to lose another one of its unique cultural aspects continue to organize theater plays, play football, write books and tell others that they have "lived in these lands for centuries" to relay their culture to future generations.

The 80-year-old Peter Papi, the head of the İzmir Levantine Association is of Italian descent. He said that they founded the association to come together, remember the old days and preserve the Levantine habits and culture for future generations.

Papi said the association also preserves historical documents and photographs owned by Levantines who have passed away. "But the younger generations are not too enthusiastic about inheriting this heritage," he said.

He added that Levantines in small numbers also live in Istanbul, İskenderun and Mersin. "I don't know whether the Levantines chose İzmir or İzmir chose them. I think they chose each other. And this way both were content. In the Ottoman era, İzmir was a place where those coming from abroad could easily adapt and communicate. It was the East's door to the West. I see myself as a native of İzmir," said Papi.

Ugo Braggiotti, 65, one of the founders of the İzmir Amateur Levantine Theater said the theater culture in İzmir was started by Levantines who used to read French plays in original language. "We are actually Turks. I was born in Turkey. But I also encountered the Italian culture because it was kept alive in our houses. If you ask me whether I'm Italian I can't absolutely say yes, because 50 percent or more of my identity is Turkish. But I'm not entirely Turkish either," he said. Margery Braggiotti, the daughter of an English father and Italian mother was born in İzmir 76 years ago. She said that she never felt like a foreigner in Turkey and her children grew up as Turks. "If you were to ask me where I'm from, my answer would be I'm from İzmir. So if İzmir is in Turkey, then I'm Turkish. Without İzmir, I neither feel nor know myself. For example in Istanbul I'm a foreigner," she said.

Ingrid Braggiotti said they were proud to be a part of Turkey's cultural mosaic.

"It took us three years," Braggiotti said, adding that "some of our recipes are 400-500 years old. Our grandmothers, their mothers left us Romaic recipes written in Latin. These are of great cultural value and should not disappear."

Braggiotti emphasized that the Levantines created an extraordinary cuisine - a fusion of European and Anatolian cuisines, adapting some of them to the region or by replacing the original contents with local contents. Some of them, like "keftedhes," "brizolakya pane" and "pita" will now be passed down to future generations.

Giuliano Gloghini, a businessman of Italian origin, talked about his stories from Anatolian lands and his adventures in football.

He said that the Levantines brought football to Anatolia. "The Giraud and Whittal families were the first to play football here. It was a beautiful and beloved sport and so it spread. Football has a lot of significance for us. My grandfather played football, so did my father played, and now I play it too. We're working to keep the Levantine spirit alive in football."

Gloghini said that the first Levantine football team was founded in the 1910s in İzmir and took its name from the Italian folk hero Garibaldi. But it was later shut down on the orders of the Italian consulate following a 10-0 defeat to the Altay football team.

Stating that the football adventure has continued with different teams, Gloghini said famous Levantine players such as Edwin and Joe Clarke played for Turkish teams, especially in Altay.

Gloghini said he still plays football in the Azzurri Football Team, the younger generations play in a team called the Levant United but due to their dwindling numbers, the team is not entirely composed of Levantine players.

History at every step

Brian Giraud said that prior to the French Revolution his ancestors came to İzmir and were involved in trade. He said that their mansion in Bornova was used as one of the headquarters of the Turkish army during the Turkish War of Independence. "This house back then was used as a military headquarter by the high ranking commanders of the Turkish army. There are photographs of important people taken in front of the mansion from that period. There are pictures of Atatürk walking in on one of its balconies. Apparently, he visited this house. The house was used by the military back then but I do not know by whom. In fact, I'd like to know who stayed here at that time," said Giraud.