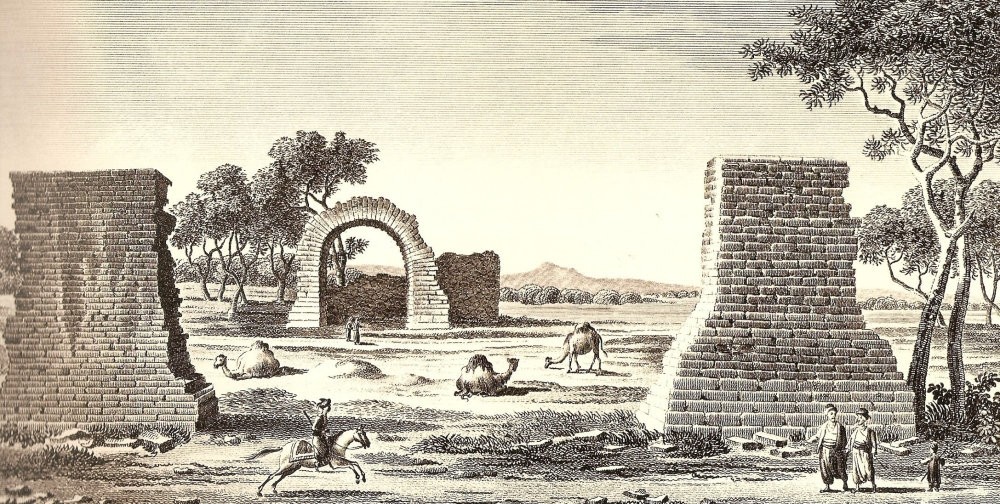 A gravure by an anonymous artist depicts the remains of the City of Troy.
by Erhan Afyoncu
Jan 30, 2019 1:04 am

Every nation in Europe linked themselves to the Trojans at some point of their history, but the truth is Trojans and the City of Troy are the embodiment of all Anatolian civilizations that stood up against invaders

The debate surrounding the descendants of the Trojans has been a hot topic throughout European history. The French established a connection, ennobling themselves through a connection with Troy. Being Trojan actually unites Germans and Italians. According to some writers, both nations were members of communities that ran away from Troy. In the U.K., it was said that Britons and Romans were actually Trojan exiles.

The sources of the idea of Trojan Turks were "The Chronicle of Fredegar," written in the seventh century, and "Gesta Francorum" in the 12th century.

According to these works, Turks and Franks escaped the region after the invasion of Troy. While Franks migrated to Hungary and the Rhine region, Turks settled in Scythian lands.

Coluccio Salutati (1331-1406), one of the rare writers who had a positive opinion about Turks before the 15th century, said the Turks' attacks against the Christian kingdoms covered up their merits. Salutati said Turks were more loyal to the ancient Roman soul than modern Italians. According to Felix Fabri, Turks were the real Trojans, who became Muslims, and the true enemies that threatened the Christian world at that moment.

After Constantinople fell, many compared Turks and Romans and the most important generals of the ancient period. Some also compared the sacking of Rome and the fall of Constantinople.

There's an interesting similarity between the words Teucri and Turk; Turks' being against Greeks and the reactions of humanists against the church authority played a great role in the creation of the Troy legend.

According to Spanish traveler Pero Tafur, the public in Istanbul said: "Turks will avenge Troy" in 1437, when he visited the city. During Istanbul's conquest, it was mentioned that the great Turk, Mehmed II, dedicated his victory in the name of revenge for the Trojan virgin who was raped at the Pallas Sanctuary.

Counterfeit letters meant to look like they were written by Mehmed II, also known as Mehmed the Conqueror, after the conquest of Istanbul portrayed the sultan as the successor and avenger of Hector and other Trojans and who insulted the pope; they were read again and again in many places.

Some writers justified the occupation of Greece by Turks, based on the Troy legend.

Giovanni Mario Filelfo blamed the Greeks for their own defeat and the Latins for their inability to unite against Mehmed the Conqueror in his poetic work titled "Amyris," where he described the life and conquests of the sultan. In fact, he often praised the Ottoman sultan. He presented the sultan's victory over the Greeks as a triumph of justice, drawing attention to the fact that Mehmed II was a descendant of the Trojans. In the end, the revenge of the treacherous conquest of Troy by the Greeks was taken. Rodrigo Sanchez Arevalo also legitimized the Ottomans' defeat of Greece as the rightful revenge of Trojan descendants.

Historian Stefanos Yerasimos says Turks are actually brethren according to this Trojan rumor, which became widespread in the Renaissance. He says that it is also fictionalized that they are relatives of Aeneas, the founder of Rome, after they took over Istanbul; the empire did not disappear but simply stayed in the same family.

Mehmed II, who had followed the Western world closely since an early age, knew the story of Troy. During the conquest of Lesbos, Mehmed II came to the place featuring the ruins of Troy in Çanakkale and examined what was left behind and Troy's location. He also had the graves of Achilles and other heroes searched.

He praised the heroes of the Trojan War, which were also praised by Homer in his work, implying his appreciative feelings. The sultan's historian Kritovulos wrote that Mehmed II nodded his head at the Trojan ruins and said: "God hid me as the ally of this city and public until this time. We defeated the enemies of this city and took their homeland. Greeks, Macedonians, Thessalians and Moreans had taken this place. We took revenge on their bad behaviors toward us, Asians, from their grandchildren even if many ages and years have passed."

There were some who were against the Trojan rumor. Sir Richard Guylforde was against the thesis saying Turks were the descendants of Trojans. According to him, Turks did not have the authority to take over Greece, like they did not have a right to continue the Trojan War. Many counterfeit letters were asserted to have been written by Mehmed II or written to him occurred during the Renaissance. In one of them, the sultan writes a poem to Pope Pius and says that he is Trojan and that his aim is to revive Troy instead of causing trouble for Christians. He implies that this is why Turks have the right to subdue Greeks. Besides, he mentions that he is surprised to see that Italians want to join the Crusaders as they are also Trojan in origin and have a blood ties with them. He stressed an Italian campaign and said that he would come to Rome.

Pope Pius II also rejected the common rumor that Turks are Trojan descendants and asserted that, "Turks are primitive and barbaric people that migrated from eastern Scythian." He went to great lengths to destroy the rumor of Trojan Turks, as he supported the Crusaders. After the conquest of Istanbul, supporters of the Crusade objected to this thesis and associated Turks with the Scythians, who were considered barbaric at the time.