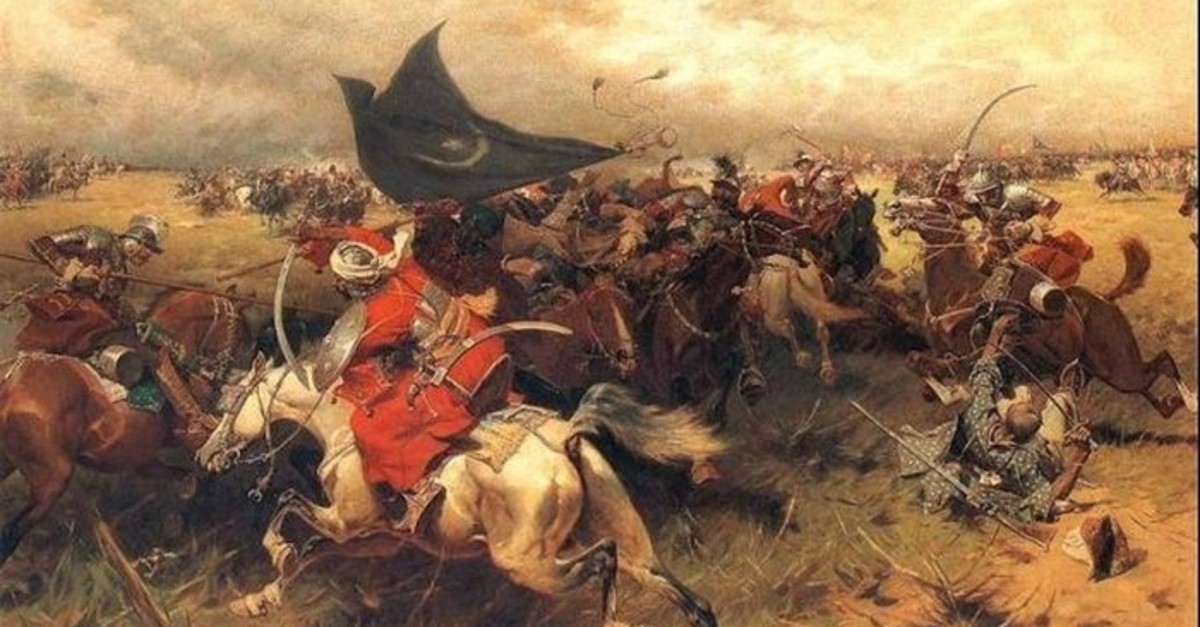 U.S. President Donald Trump's visit to American troops in a heavily guarded military base in Iraq made headlines at the end of 2018. However, nearly six centuries ago, Sultan Bayezid came close to the walls of the Fortress of Nicopolis and spoke with his soldiers when the fortress was besieged by an enemy army on all sides.

President Trump's recent visit to U.S. troops in Iraq that lasted only a few hours was greatly talked about. The U.S. president, just like his predecessors George W. Bush and Barack Obama, made a secret trip to an American base in Iraq, which hosts a lot of U.S. soldiers and is heavily guarded. Whereas, 622 years ago, Sultan Bayezid I (nicknamed Yıldırım/Thunderbolt), who fell from grace due to his defeat by Tamerlane despite being a remarkable Ottoman leader, came close to the walls of the Fortress of Nicopolis, which was surrounded by an enemy army on all sides and spoke with the commander of the castle, Doğan Bey.

The Ottoman advance in the Balkans and their siege of Istanbul during the reign of Yıldırım Bayezid had shocked European nations, particularly Hungary. The initiatives of Hungarian King Sigismund and Byzantine Emperor Manuel, along with sermons and declarations of the Pope, had led Western Christians to mobilize against the Ottomans for the first time. The Crusader army that ensued was composed primarily of Hungarians, accompanied by the French, Britons, Scots, Poles, Swiss, Italians, Belgians, Austrians and the Dutch. In addition to Hungarian King Sigismund and Jean Sans Peur, Count of Nevers and grandson of French King Jean II, the Crusader army included many nobles and knights as well. Around one-tenth of the French corps, which numbered 10,000, consisted of prominent members of the French nobility.

Referred to as the last Crusade by some European historians, that joint army set out on its campaign with the same dreams that their ancestors had before invading Jerusalem three centuries earlier. They would expel the Turks from the Balkans, march on Jerusalem and go down in history as heroes. Though large, the Crusader army lacked unity of command. Entering the Ottoman land from two directions, the Crusaders rapidly crossed the Danube. They put Muslims to the sword as they advanced and laid siege to the Fortress of Nicopolis. The Crusaders were quickly swept up in the euphoria of victory. Doğan Bey, the commander of the fortress, rejected the enemy's offer for surrender. While keeping the castle under siege, the Crusaders were also entertaining themselves. Hungarian King Sigismund, inebriated by the cups of wine he sipped one after another, said, "Whether the Turks come or not, we will be in Syria next summer. We will liberate Beirut, Jaffa and other cities from Muslims and conquer Jerusalem together with all the other sacred cities of Christianity."

Having learned of the advance of the crusader army, Sultan Bayezid lifted the siege of Istanbul and moved swiftly, true to his nickname, and came within six hour's march to Nicopolis. The reconnaissance patrols sent by the Ottoman army brought the news that the fortress was besieged by a large army.

Yıldırım Bayezid wondered if Nicopolis could be captured by the enemy. The commander of the fortress, Doğan Bey, was a very competent soldier, but he might not stand against such a huge army and surrender. Bayezid could not find a way to communicate with those inside the fortress. A messenger should be sent to the fortress to inform the soldiers that the Ottoman army was approaching. But it looked almost impossible to pass through enemy lines unnoticed and reach the fortress.

A sultan behind enemy lines

Yıldırım contemplated a solution for a while to find. After failing to come up with one, he decided to go to the fortress personally. As he thought his senior officials would not agree to such a crazy plan and would try to stop him, Bayezid did not inform them. He left his tent secretly, mounted his horse and departed for the fortress with a few guards. Yıldırım rode in the darkness of the night, crossed the enemy lines unnoticed, reached the walls of the fortress, and shouted: "Hey Doğan! Hey Doğan!"

The fortress commander Doğan Bey, who was trying to watch the movements of the enemy from the ramparts with a worried look, was surprised by what he heard. How can the sultan be there while the fortress is surrounded by the enemy on all sides? While trying to understand what was happening, Doğan Bey heard the same voice again, "Hey Doğan! Hey Doğan!" This time he understood that it was not an illusion and he looked below, filled with joy. Yıldırım Bayezid was there, on his horse in the dead of the night. Doğan Bey answered in consternation, "Yes, my glorious sultan."

Contented now that he found whom he sought, Bayezid asked, "Hey Doğan, what is the situation here?" Still unable to believe that he was talking with the sultan, the fortress commander said, "The enemy came a week ago and besieged the fortress on all sides, but we managed to hold on, knowing that aid will come. The walls are sound, and we have plenty of provisions."

Upon hearing this, Yıldırım replied, "Keep holding on. We'll come to the rescue," and then disappeared into the darkness of the night. While Doğan Bey was still unsure whether it was real or not, enemy soldiers, who heard the voices and realized that someone was talking with those in the fortress, moved to catch the person they believed was a messenger. However, on a horse galloping into the darkness, Yıldırım had already disappeared.

The next morning, after Yıldırım's visit to the fortress, the Ottoman army was in front of the Crusaders. Though surprised to see the Ottomans so early, the Crusaders were so sure about their victory as to boast; "If the sky should fall, we could prop it up with our spears."

On Sept. 25, 1396, the two armies faced each other near Nicopolis. More than half of the Crusader army, which numbered above 100,000, was composed of Hungarian troops, while the French came second with 10,000 soldiers. The Ottoman army had around 60,000 soldiers. Western Europeans, who had not fought the Ottomans before, were thinking they would win an easy victory. But the King of Hungary, who had experience in fighting the Turks, was cautious. He said that sending foot soldiers first to understand the condition of the Ottoman troops while keeping the knights in the rear would be better. As they were sure of an easy victory, however, the Western Europeans were unwilling to let the Hungarians claim the victory. They were thinking of claiming the honor of victory by launching the first assault themselves.

The battle began with a charge of the French knights. Then the Britons and other European troops attacked the Ottoman army. When the mounted knights broke through the Azap infantry in the Turkish front line, they thought they had won the victory. However, the Ottoman army retreated to the flanks in line with the 1,500-year-old "crescent tactic" and enveloped the enemy. The Hungarian king noticed this, but it was too late. The Voivode of Wallachia and the King of Croatia immediately abandoned the field. After losing their horses under the rain of arrows shot by Ottoman soldiers, the knights were slain by the Ottoman infantry. Most of the knights had already been killed three hours after the start of the battle. Those who tried to escape drowned in the Danube. The King of Hungary barely managed to escape by a fisherman's boat, while many Crusader commanders were taken prisoner. Among the prisoners was Jean Sans Peur, Count of Nevers, who was known as Jean the Fearless for his courage. Having set off with the dream of establishing a Crusader kingdom in Jerusalem, the French ended up being annihilated. The Ottoman army won a decisive victory.