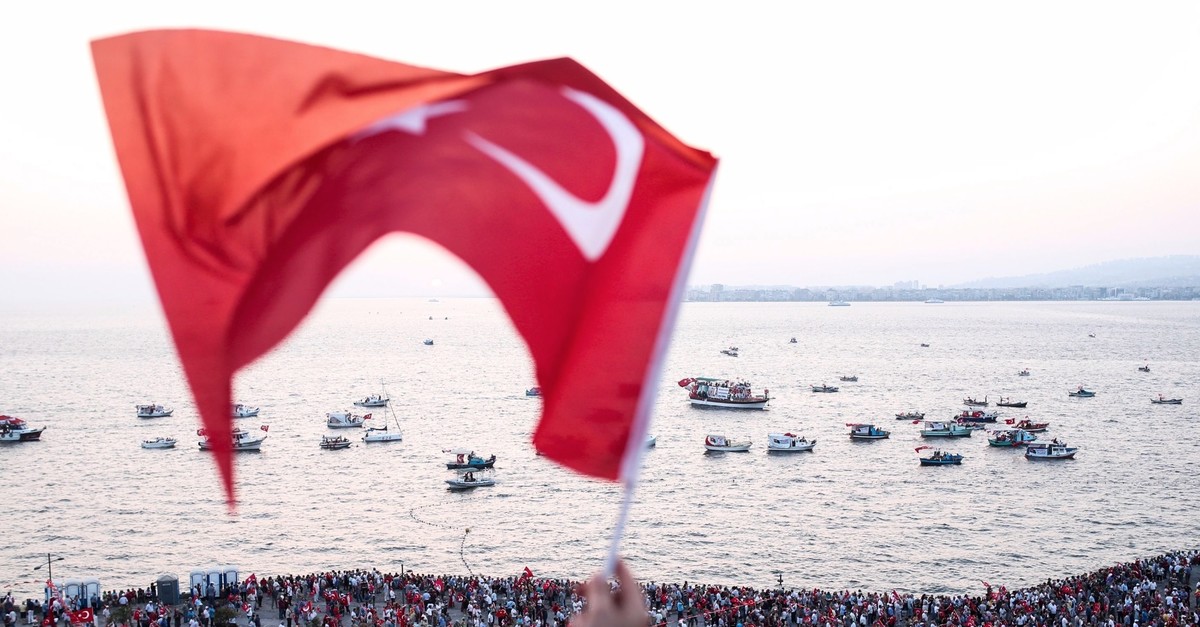 The failed coup attempt on July 15, 2016 not only targeted Turkish democracy and the nation but also expats who call this beautiful country their home

Three years on from the despicable and heinous coup attempt which was thwarted by the heroic Turkish people, memories are still fresh and will continue to be in everyone's minds for years to come. While it is impossible to even remotely pay adequate respect to the immeasurable pain and grief felt by those citizens who lost loved ones on that night and early morning to restore their cherished democracy — 250 innocent people fell victim to terrorists and 2,000 more were injured we as expatriates living in Turkey at that time were no isolated fringe figures either, far from that.

As modern Turkey is the most welcoming and hospitable nation we have always felt a part of and parcel of her social fabric; we work, study, travel, retire and ever more often raise our families here. However, on the night of July 15, 2016, each and every one of us had the eerie feeling that we could become targets in the wider sense, too. Turkey and the Turkish nation were under attack, and so were we, who had made this proud nation our new home. Solidarity and full support for all things Turkish became the buzzword. None of us ever thought of packing the day after… we said, we are here with you and we will help get those responsible.

In a previous analysis published a year ago in this newspaper, expatriates' impressions of that fateful night, which itself was the focus of the article (as witnessed in the capital Ankara and further afield), were covered. Hence, today the core issue is closely related to a somehow wider dimension.

At stake: First, why did we expats feel ever more Turkish while being basically left to our own devices by our first home nations? Second, could anyone have predicted such a monstrous criminal and terrorist attack ever happening? And last but not least, how has Turkey fared since then?

On the morning after, international residents the same as everyone else had to come to terms with what had just happened, or put differently, so luckily had not. There was no dictator ruling the country and Turkish democracy was fully intact and as we know three years later, better than ever before. By Saturday afternoon everyone visited each other or returned to the cafés and restaurants where they had followed the events live on television the night before together with their Turkish friends, colleagues and neighbors. The most impressive development was the shared anger among Turks and foreigners; actually, in the expat community few if any would have ever described themselves as "foreigners;" rather as friendly international imports or simply as a new good neighbors. Hence, our anger as in the sense of how dare they, or how could they; who would want to destroy our modern nation and all her achievements? At that point little was known who "they" were; on that night speculation was rife among our expat community about ultranationalist circles in the military or far-right secular movements or even a foreign hand. Soon of course it transpired that the Gülenist Terror Group (FETÖ) had plotted against the entire Turkish nation, risking the lives of innocent women, men and children along the way.

Besides the very positive dynamics of international solidarity among expats and Turkish neighbors felt all over the country, something less laudable occurred as well. Our media in the countries from where we originally hailed from was rather less enthusiastic about the fact that democracy had just survived and that all would be well again soon here in Turkey. If we then add that our home governments

and despite what at best could be characterized as shedding a few crocodile tears here and there, with the notable exceptions of the United Kingdom and its government, and the then Austrian ambassador to Turkey who soon thereafter visited the bombed national assembly building in Ankara an unnerving silence seemed to blanket the European continent by transforming it into a bizarre cocoon of, "We do not really want to know or care."

What united many of us in our coming to terms was the phase after the coup attempt, which was all about soul searching for the answer to the question, "Did no one seen this coming?" You simply can't stage a coup overnight. Plans must have been made in advance, perhaps long in advance. Sleeper cells must have been put in place, financing and logistics arranged. Escape routes should things go wrong are a necessity, so are contingency plans should the plotters succeed but face resistance.

This brings us to the year 2013 and Gezi Park. What started as legitimate and peaceful protests by young citizens who promoted the protection of the environment was soon highjacked by violent segments of society who had totally different ideological and criminal plans: To topple the democratically elected government. Many in our expat community remarked rather cynically and soon CNN would send anchorman Ben Wedeman reporting live from a suite in the Marmara Hotel overlooking Taksim Square declaring (in a reference to events in Cairo) that the government had just been ousted by the people.

Ever since that early summer in 2013, the levels of polarization in Turkish society rose. Yet not because of polarization imposed by the government or the ruling Justice and Development Party (AK Party). But democracy was not to be derailed, neither by ill-fatedly turning a peaceful protest into a terror mob or by pushing anti-democracy sentiments in the media and on social media. Could it be that those circles intent on destroying not only Turkey's positive image in the world but destroying the welfare of the nation from within, too, had temporarily retired from public view and plotted for July 2016 instead, perhaps not yet knowing on which day in which year they would finally strike?

It would make sense after all, as what we know now is that FETÖ terrorists had their dirty hands in the Gezi Park protests and their aftermath.

Turkey – where to now?

If someone would come and interview members of our expat community, and one has to be very well aware of the fact that generalizations should not normally become part of an article, the assumption is that the absolute majority verdict would be something along the lines of:

Gülenist terrorists tried to derail the Turkish way of life, perhaps tried twice (see above in 2013) or only once (in 2016); yet they did not succeed. Turkey was and remains a strong model democracy. It is home to an ever increasing number of i

nternational arrivals, and a hot spot for soon-to-be expatriates. It is clean, green, and a safe place to move to. We can go to ever better hospitals, travel in ever more comfort to all four corners of the country, have access to a fantastic internet network and enjoy quality of housing unheard of in many European countries. It is still affordable to move here and to reside here.

Our Turkish neighbors send their children to ever better schools and universities. Graduates are highly skilled. Turkey successfully pairs tradition with modernity.

There have been hundreds of positive developments, yet only a handful are mentioned due to lack of space.

What comes first more democracy or more purchasing power? A chicken and egg question, we may conclude. Over the past decade and a half, Turkey has tried to achieve both at the same time. Apparently not to everyone's liking how much must someone hate democracy and freedom and liberty to try and impose a terrorist-inspired dictatorship upon peace-loving neighbors and colleagues, on women and children, and young and old?

The year 2016 is now in the past but first and foremost let us remember those who gave their lives in the name of freedom and democracy. You are the true heroes.

Turkey as a nation came out even stronger than before July 2016 sincere compliments to the wonderful, aspiring and inspiring that Turkey we expats call home.