Background on the construction of Süleymaniye Mosque 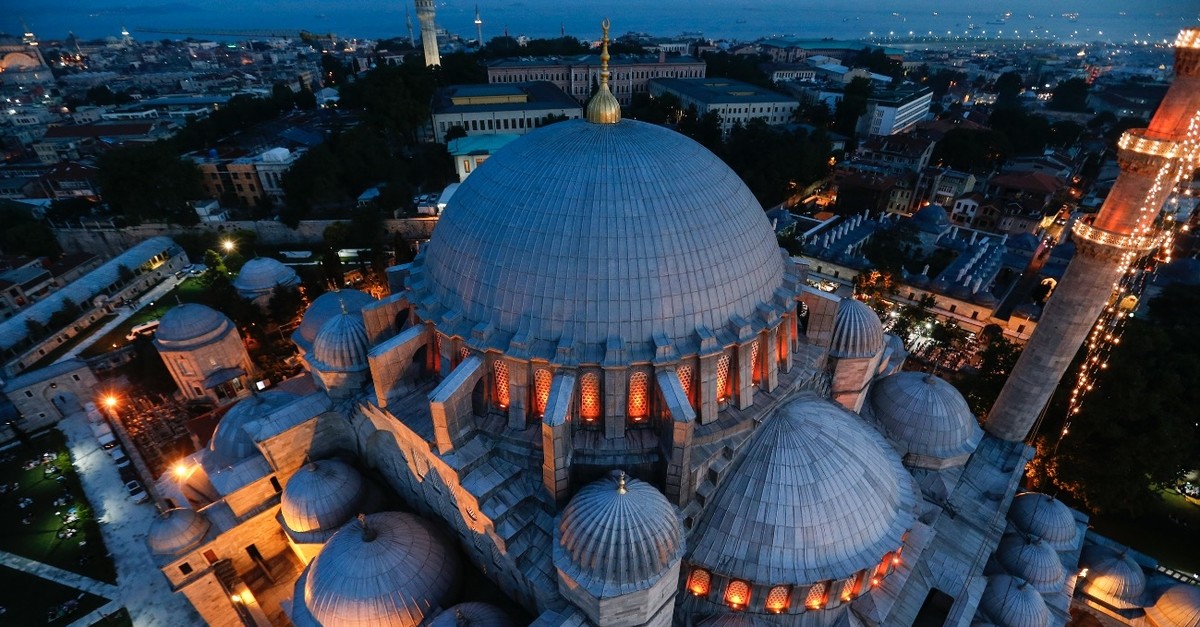 The reign of Sultan Süleyman I (Kanuni) was a period when the world was being shaped and monuments that would be celebrated for centuries were being built. When Kanuni ordered architect Mimar Sinan to build a mosque in his own name, as a master city planner the great architect chose one of the hills overlooking the Golden Horn.

Projects were drawn in advance to demonstrate how the complex would look after its completion. The mosque was expected to add to the city's silhouette in harmony with the hill it was built on and with the incline of the slope.

Mimar Sinan worked first on drawings and the model of the complex. The construction site was expanded and leveled. By June 1550, the construction of Süleymaniye complex, including the mosque, began.

During the groundbreaking ceremony, which was also attended by Kanuni himself, alms were dispensed to the poor first, their blessings were received, and sacrifices were made. Şeyhülislam Ebussuud Efendi laid down the first foundation stone in the presence of scholars, statesmen and ordinary people for a wall that would become the mihrab, the niche in a mosque wall indicating the direction of Mecca. After a recitation of the Quran, prayers were performed.

The construction of the complex went on for years. Materials and craftsmen were brought from every corner of the empire. Ships and carts carried a constant stream of stone, marble, brick, sand and timber supplies. Stones were usually brought from Davutpaşa, Haznedar, İzmit and Mihaliç, and w

hite marble from Marmara Island. Two of the giant granite columns were brought from Istanbul, and the other two from Baalbek. Marble from the ruins of ancient buildings in Salonica, İznik and Gaza were also used.

Bricks were baked in furnaces in Hasköy and Gelibolu.

Timber was brought from Ahyolu, Ahyazı, Aydos, Biga, Göynük, the Istranca mountains, İzmit, Kandıra and Sücebolu. The fasteners of internal iron clamps that attached the stones of the mosque were brought from Samakov, and the lead used to cover the domes was procured from mines in Serbia. Ceramic tiles were made in İznik and Istanbul.

As certain stages of the construction, like the closing of the dome, completion of semidomes and joining of the imaret arches, finished, or as buildings around the mosque were completed, gifts and honey sherbets were distributed, and sacrifices were made.

A lot of great craftsmen took part in the construction of Süleymaniye Mosque. Calligraphy works in the mosque were carried out by calligraphers Ahmed Karahisari and Hasan Çelebi, and Kara Memi finished the hand-drawn paintings. Master craftsmen of the period like Hacı Mehmed worked on glaziery, Nakkaş Mehmed on decoration and Üstat Ahmed on the woodwork. The mosque's main gate was crafted by Sofi Salih, the courtyard gate by Hacı Salih and the mihrap by Konyalı Yahya.

At dawn on Aug. 16, 1556, the mosque's central dome, which has a diameter of 27.4 meters, was closed. The minarets were completed in December 1556. The Süleymaniye complex was completed in a relatively short period of seven years, after spending 59,760,180 akçes, approximately a third of the empire's annual cash budget revenues. Nearly two-thirds of the spending was made for the craftsmen and workers, and one-third for materials.

The mosque's straw mats were brought from Egypt, and its carpets were weaved in western Anatolia. The mosque was also furnished with reading desks of exquisite workmanship and illuminated Qurans written by prominent calligraphers that fascinated people.

On Friday, Oct. 15, 1557, seven years and four months after the start of construction, Süleymaniye Mosque opened for worship. During the grand opening, Mimar Sinan gave the key to the sultan, prayed and clasped his hands before him. When asked by Kanuni who he thought deserved to open the mosque, his janissary officer replied, "My sultan, your master architect is such a valuable and hardworking person, and rightfully deserves this honor." Upon this answer, the sultan turned to Mimar Sinan and said, "It is better that you open this Beytullah [house of Allah], that you built," and gave him the key after praying. And Mimar Sinan opened the mosque, exclaiming "Ya fettah! [Oh Conqueror]."

Built on a 60-decare plot, the buildings within the complex were arranged in a U shape, with the mosque in the middle. The complex is a collection of buildings containing a mosque, four madrasahs, a medical school, darülhadis (school of traditions of the prophet), a hospital, darülkurra (schools for Quran reciters), a primary school, mülazım (newly initiated scholar-bureaucrat) rooms, a hospice kitchen, a restaurant, an inn, a bathhouse, rooms, shrines and numerous bazaars with lots of stores.

Ottoman traveler Evliya Çelebi wrote that the whole complex had 1,000 domes and hosted 3,000 people who served there.

The New Mosque in Eminönü (Yeni Cami), whose construction began in 1597 at a time when the Ottoman Empire showed signs of losing its grandeur, was built in 60 years.

Construction of the Süleymaniye complex in nine years demonstrates the organizational and economic power of the empire at the time. Indeed, Ömer Lütfi Barkan's monumental book, which was prepared after meticulous research, reveals the methodical and disciplined work and the organizational capabilities of the Ottomans at the time.