Lira surges after vote of confidence for PM Erdoğan 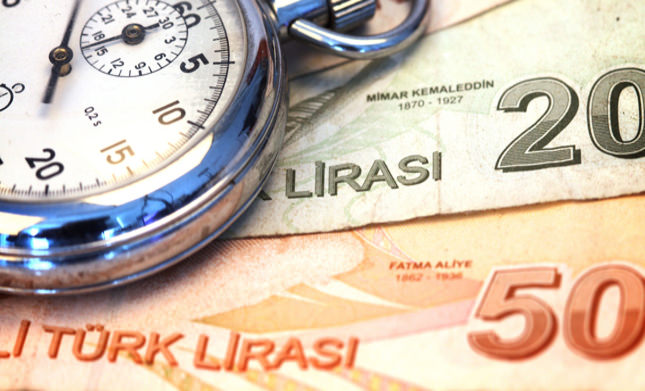 by Mar 31, 2014 12:00 am
ISTANBUL — Prime Minister Recep Erdoğan's ruling Justice and Development Party, yesterday won what appeared to be a decisive victory in local municipal elections. With almost 98 percent of the votes accounted for, Erdoğan's AK Party held a little more than 46 percent of the votes, a significant increase on its 39 percent share at the prior municipal elections in 2009.

The USD/TRY today opened with a gap down at 2.1777 from Friday's close of 2.1893. Since then the Turkish lira has extended its gains against the dollar, bolstered by a belief that a strong victory for Erdoğan's party will end months of political instability. The USD/TRY today hit 2.1469 - its lowest level in 2013. In January, the currency pair surged to a record high of 2.3895.

Local elections results often provide guidance to general elections. "This time even more so, as the vote was widely seen as a referendum on Erdogan's 11-year-rule following a corruption scandal that began in December", opines Nordea Markets emerging markets analyst Deanie M. H. Jensen. "The equation might not be as simple in the longer run, but for the short run – a strong Erdoğan seems to be equal to a stronger TRY."

However, Jensen and her colleagues caution that any relief rally "could potentially be short-lived, as the election results potentially trigger more demonstrations in Turkey's main cities and the country head for Presidential elections in August". Nordea's analyst adds that with the confidence taken from the local elections it seems more likely that Erdoğan would run for presidency this year. "However, we do not rule out the possibility that the AK party changes its rules to let Erdoğan run for another term as Prime minister in 2015."

Societe Generale analysts expect a pretty healthy rally for the lira and "see the vote as a bullish signal in the near term", but they note that the political year is not over, with the first direct presidential elections in Turkey looming this August. "But for now, buy TRY assets", they conclude.

The Turkish lira today found additional support from strong domestic economic data. The country's GDP expanded by 4.4 percent y/y in the fourth quarter of 2013, up from the prior quarter's growth of 4.3 percent. Moreover, the Turkish trade deficit narrowed from $6.8 billion to $5.1 billion in February. Right now, the USD/TRY is trading at around 2.1551, down 1.43 percent intraday.
Last Update: Mar 31, 2014 7:23 pm
RELATED TOPICS