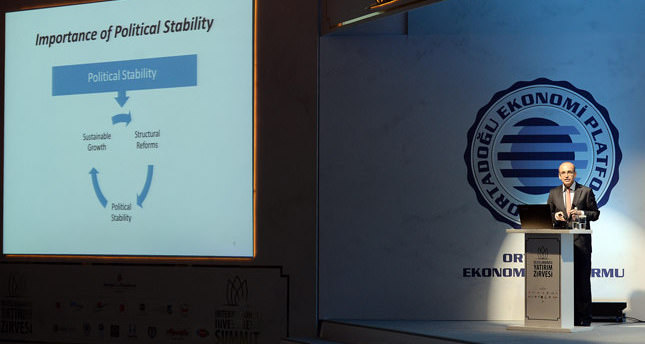 by AA Apr 11, 2014 12:00 am
ISTANBUL — Turkey's Finance Minister calls for investment in Turkey on Thursday, addressing international investors at the International Investment Summit.

Finance Minister, Mehmet Şimşek addressed investors at the summit in Istanbul, who manage around half a billion funds of Gulf capital to buy Turkish SMEs (small and medium sized enterprises).

"Emerging markets are risky but Turkey is also an EU accession candidate which means our rules and regulations, institutions and our business practices are going to be converging with the European Union," Şimşek said.

Şimşek said that Turkey's large foreign deficit will narrow as gas and oil prices decrease by 25 percent in the following ten years, as the World Bank predicts in its studies. This will bring a more stable currency and financial security to the country, according to the minister.

The minister also stressed that economic stability in Turkey has been maintained thanks to the election results which brought a politically stable environment.

He also countered that 80 percent of foreign direct investment to Turkey comes from the west, despite Middle Eastern businessmen investing their capital in the west with Western countries' stability and ease.

Businessmen from Gulf countries are negotiating investment opportunities in the construction and energy sectors in Turkey during the two-day international investment summit in Istanbul on Thursday.