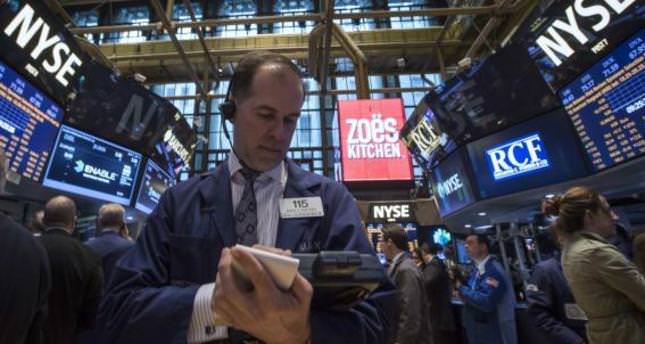 by May 02, 2014 12:00 am
LONDON — Global markets traded cautiously on Friday as uncertainty ahead of U.S. employment figures and tensions in Ukraine pushed the yield on 10-year German Bunds to their lowest in a year.

The move into the relative safety of government bonds, also including higher-yielding peripheral euro zone paper that pushed returns on Spanish 10-year debt to a multi-year low, came despite upbeat corporate merger and acquisition activity and earnings.

The big data focus is the U.S. April nonfarm payrolls report. Economists predict jobs growth of 210,000 and a fall in the unemployment rate to 6.6 percent.

But first quarter U.S. growth estimates are being cut following weak construction data on Thursday to the point that the world's largest economy might actually have contracted.

That, and an escalation in violence in eastern Ukraine between government forces and pro-Russian separatists, weighed on investor sentiment.

European stocks failed to get a boost from U.S. drugmaker Pfizer (PFE.N) raising its offer for Britain's AstraZeneca (AZN.L) or a forecast-busting profit from Royal Bank of Scotland (RBS.L) that lifted shares in the 81 percent state-controlled bank by 11 percent.

"People are a bit nervous about payrolls. Last month there was so much hype about it and it came out below expectations. They don't want to get caught out twice, so they are hedging their positions," said Michael Hewson, senior markets strategist at CMC Markets in London.

Hewson also noted that many European and U.S. indices are at or close to record highs so investors are reluctant to chase them higher, especially ahead of a long holiday weekend in Britain.

In Asia, the MSCI's broadest index of Asia-Pacific shares outside Japan .MIAPJ0000PUS was up 0.4 percent. China's markets were closed on Friday.

Two corporate stories grabbed the headlines in Europe. Pfizer raised its bid for AstraZeneca to 50 pounds a share, valuing the UK drugmaker at 63 billion pounds ($106 billion), and RBS posted a 1.6 billion pounds profit in the first quarter.