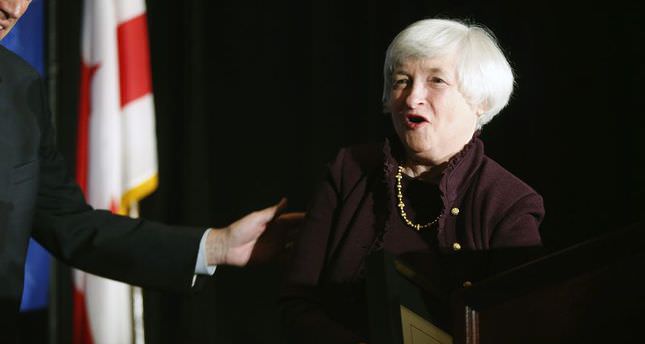 Shrugging off dismal economic growth numbers for the first quarter of 2014, the Fed said it would taper back its controversial monthly bond-buying program by another $10 billion in May amid an improving outlook

WASHINGTON — The Federal Reserve on Wednesday looked past a dismal reading on first quarter U.S. growth and gave a mostly upbeat assessment of the economy's prospects as it announced another cut in its massive bond-buying stimulus. Recent information "indicates that growth in economic activity has picked up ... after having slowed sharply during the winter in part because of adverse weather conditions," the central bank said in a statement after a two-day meeting. "Household spending appears to be rising more quickly," it added, although it said business investment "edged down."

The Fed said it would reduce its monthly bond purchases to $45 billion from $55 billion, a widely expected decision that keeps it on track to end the program as soon as October. The decision was unanimous. Just hours before the statement was released, the government reported that the economy grew at only a 0.1 percent annual rate in the first quarter, but the Fed pinned its hopes on other recent data that has suggested activity is bouncing back. Indeed, its statement was more upbeat than the one it issued after its last policy meeting on March 19. At that time, it noted that activity had slowed, although it said harsh winter weather was at play. "What the Fed is saying is ignore this first quarter number, it's not reflective of the underlying strength in the economy," said Phil Orlando, chief equity market strategist at Federated Investors in New York. Stocks closed up modestly, while prices for U.S. government debt rose after the Fed's announcement. The dollar, which had dropped on the disappointing news on first quarter growth, held steady against the euro and the yen.

The Fed has now reduced its monthly bond purchases by a cumulative $40 billion in four steady steps. The gradual tapering seeks to close an era in which the central bank's balance sheet quadrupled to more than $4.2 trillion through three separate purchase programs launched to battle the financial crisis and the recession and slow growth that followed. The projected end of the program sets the stage for a series of policy decisions expected next year on when and how to reduce the balance sheet to more usual levels, and, most notably, when to move the target interest rate above the near zero level maintained since late 2008. The Fed disclosed that its board of governors met on Tuesday to discuss "medium-term monetary policy issues," the type of session that in the past has preceded important policy changes. But Janet Yellen's second meeting as Fed chair offered no specific new guidance on rates or other core questions the Fed must answer in coming months. The Fed's policy panel said in its statement that it will keep the overnight target rate between 0 and 0.25 percent "for a considerable time" after the bond buying ends - the same formulation it used after its March meeting. Indeed, outside of its discussion on the economy, the Fed's statement was little changed from last month.

Going forward, the bond purchases will be split between $25 billion of Treasuries and $20 billion of mortgage-backed securities, a cut of $5 billion a month to each. Analysts expected little out of this session as the Fed enters what may prove a sort of holding pattern as it closes out the bond purchases and debates when an initial interest rate increase may be warranted. Investors currently expect the first rate rise around the middle of next year. With little sign of inflation and unemployment at a still-elevated 6.7 percent, Yellen has said there is plenty of "slack" in the economy. In its statement, the Fed noted that unemployment "remains elevated" and that continued improvement required "appropriate policy accommodation" in the form of continued low borrowing rates. While the GDP report did not throw the Fed off course, it could influence the discussion going forward. The 0.1 percent annual growth rate was far below expectations. "This certainly is going to give Janet Yellen's camp a lot more ammunition to remain on the more neutral to dovish side," Richard Cochinos, a currency strategist at Citi in New York, said ahead of the Fed's decision. It will also focus attention on the next round of data on jobs and inflation as signs of whether what the Fed analyzed as a winter lull was in fact nothing more than
that.