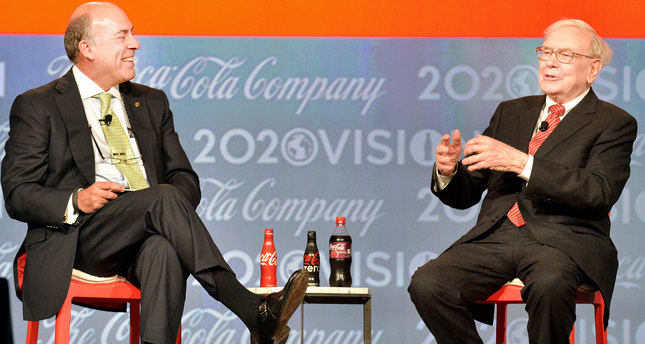 After conversations between CEO Muhtar Kent and Warren Buffett, the biggest shareholder, Coca-Cola is expected to revise its controversial equity compensation plan for executives

ISTANBUL — Coca-Cola will likely revise its controversial equity compensation plan for executives before it goes into effect in 2015, following pressure from Warren Buffett, the Wall Street Journal reported, citing people familiar with the matter.

Buffett, chairman of conglomerate Berkshire Hathaway, made his reservations about the plan known privately in recent weeks to Coca-Cola's CEO Muhtar Kent in three conversations, the Journal quoted sources as saying. As of Feb. 24, Berkshire owned 400 million shares of the company, just over 9 percent of the shares outstanding, according to Thomson Reuters data.

Buffett said last week that he thought Coca-Cola's controversial equity compensation plan was excessive, but Berkshire Hathaway abstained in the shareholders vote. Buffett, in an interview with CNBC, said he and partner Charlie Munger did not want to vote against the plan because he did not want to show disapproval of Coca-Cola's management. On Tuesday, Buffett said he had spoken to Kent "multiple times" and to his son Howard "very briefly" in reference to the equity compensation plan, adding that his son served Coca-Cola shareholders and not Berkshire on the beverage maker's board.

Buffett's pressure adds to that from critics, most notably activist investor David Winters, who said the plan would dilute the holdings of current shareholders too much. Coca-Cola said last week 83 percent of shareholders approved the plan.

Spokesman Petro Kacur said in an emailed statement to Reuters that "no changes are being made to the plan at this time." The expected changes include awarding fewer options per staffer each year, so the pool of options in the new plan lasts longer, the Journal said, quoting a source. Another choice could be a longer vesting period for options than the four years the plan calls for.

A third move would involve flipping the 60-40 percent split between stock options and performance units, the Journal said.

According to CNN, the plan, which will pay Coke managers generously with shares of the company if they achieve specific performance goals, passed last month at Coke's annual meeting without Buffett's help.

Over the years in his annual letters, Buffett has called various stock option plans unfair. In his 1985 annual letter, Buffett called stock options a fundamentally unfair deal for shareholders, "equitable only by accident," and a compensation plan for "managerial Rip Van Winkles looking to take a doze."

In 1994, Buffett called stock options "free lottery tickets."Coke's plan boosted the number of options granted to top executives by 20 percent. A Coke spokesperson said in a statement, "The Coca-Cola Company Board respects Mr. Buffett's philosophical stance on equity-based compensation. As our largest shareowner, Mr. Buffett is an avid supporter of the company and its management team, and has been a wonderful counselor through the years." Kent said at an annual meeting that the executive compensation plan is in line with the company's goals.

According to Coca Cola's statement, Kent, who has been CEO since 2006, earned $21.6 million (TL 45.5 million) in 2012. Apart from his base salary, the vast majority of his enormous pay package came from share options, totaling $13.1 million and he received $6 million as a performance bonus. In 2011, his base total income was $21.2 million. The company's net income attributable to shareholders fell to $1.62 billion, or 36 cents per share, in the first quarter ending March 28 from $1.75 billion, or 39 cents per share, a year earlier. Revenue fell 4 percent to $10.58 billion.