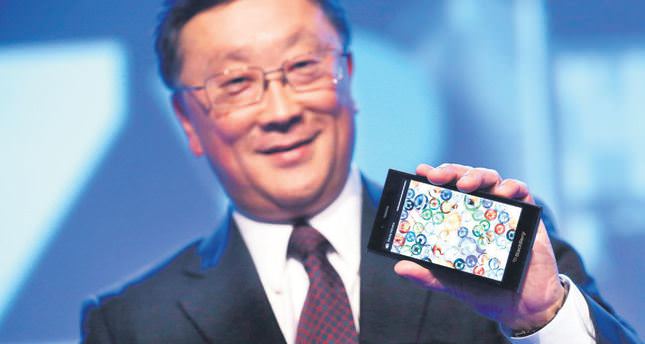 Embattled smartphone maker BlackBerry launched a new budget handset in Indonesia, one of its last bastions, in the hope it will take off in emerging markets and stem a decline in the company's fortunes

TORONTO — BlackBerry Ltd launched a low-cost touchscreen device in Jakarta, the Z3, as the embattled smartphone maker looks to revive sales in emerging markets like Indonesia where its once-fervent following has shrivelled. The handset, unveiled at a glitzy launch event in the Indonesian capital yesterday, is the first in a line of devices being made with FIH Mobile Ltd, a unit of the giant Taiwanese Foxconn Technology Group best known for assembling gadgets like iPhones and iPads for Apple Inc. The success of the handset retailing for less than $200 (TL 416) could well decide the outcome of both BlackBerry's tie-up with the contract manufacturing giant and its own future in smartphones. The Z3 Jakarta Edition will hit store shelves on May 15. "If this device allows them to grow again, even if it's just small, steady growth, that's a success in itself. That says there is still room for BlackBerry in Indonesia," said Ryan Lai, market analyst at consultancy IDC. The Z3 is the first phone to be launched by BlackBerry since new Chief Executive John Chen took the helm late last year. After Indonesia it will be gradually introduced in six other countries including the Philippines, India, Vietnam and Malaysia.

Waterloo, Ontario-based BlackBerry hopes that the device and others to follow will help it claw back some of the collapse in its market share, ceded to Apple's iPhone and Samsung Electronics Co's line of Galaxy devices powered by Google Inc's Android operating system. "If the market doesn't receive this product well, then we definitely have some negative issues to deal with," Chen said at the launch at Jakarta's Ritz-Carlton hotel.

BlackBerry said it doesn't have an official sales target for the device, but Chen said he expects to sell millions of Z3 handsets around the world, without disclosing further details. Just two years ago, the Canadian firm had a 40 percent share of the Indonesian market, shipping more than 600,000 handsets per quarter in a country once known as "BlackBerry Nation". But the launch of the premium, high-priced BlackBerry 10 last year failed to attract buyers in a country where nearly 40 percent of the population live on about $2 a day. The company's market share has slumped to just 4 percent, with shipments of around 100,000 devices in the first quarter this year, according to IDC.

Indonesia is now dominated by Samsung, which sells about one of every three smartphones in Southeast Asia's largest economy. Chen hopes that the Z3 and other devices to follow spark a change in the company's fortunes. The Z3 is being launched at a price point below $200 to address one of the big turnoffs for consumers in emerging markets - BlackBerry 10 devices being too pricey. "From conception to delivery, the Black-Berry Z3 Jakarta Edition was designed specifically with our Indonesian customers in mind," Chen said in a statement. The device will allow users to type in Bahasa and come with a special set of BlackBerry Messenger, or BBM Stickers featuring local characters.

Later this year, BlackBerry will launch a new, non-touchscreen device dubbed the Black-Berry Classic in partnership with Foxconn. The handset will see a return of the command keys that include 'Menu,' 'Back,' 'Send' and 'End' buttons, along with a trackpad. BlackBerry hopes the move will address the concerns of those users who found their new devices hard to navigate. For Foxconn, the tie-up fits with plans to set up a manufacturing plant in Indonesia to build smartphones and other electronic devices. The Taiwanese company's ambitions have been on hold since 2012 due to drawn-out talks over tax breaks, property and import restrictions.