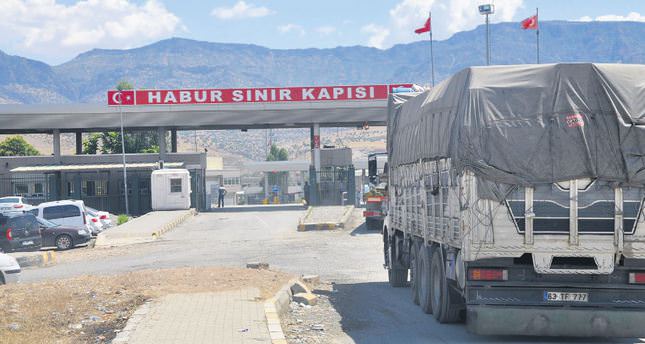 As ISIL militants press south towards Baghdad in an onslaught against Maliki's government, experts expect a small downturn in Turkish-Iraqi economic relations which could take long time to recover

As militants from the Islamic State in Iraq and the Levant (ISIL) gained more ground in Iraq, the ongoing crisis has caused far-reaching repercussions for Turkish trade and investment relationship with the country, says Iraq-Turkey business leader Şerif Ercüment Aksoy.

Many Turkish firms from the energy extraction, commerce and construction sectors, and investing and expanding in Iraq, have voiced their concern over the deteriorating impact of ISIL's attacks on the security and stability of the country. The head of Foreign Economic Relations Boards Turkey-Iraq Business Directory Aksoy said that unless the ongoing violence is stopped, the volume of Turkish export is likely to severely decrease. "I believe ISIL would primarily attempt to bargain with the authorities and they would abandon Mosul in a short period of time. If the militants' attacks endure, we could be highly affected by that. Under these circumstances, we could only trade with the Kurdish region. The export volume with Iraq would decrease to $9 million (TL18 million)," said Aksoy.

The business leader also said that great efforts would be made to solve the ongoing Iraqi unrest considering that there is "so much to lose by allowing such a crisis to escalate." Aksoy underscored that there is no Turkish investment in Mosul, while recalling some business relations made by Turkish businessmen over the region. "Our Turkish banks have no branch offices in Mosul, but we do in Baghdad and Irbil. There has been no problem reported so far," said Aksoy.

With 30 Turkish truck drivers and 49 Turkish consulate employees taken hostage by ISIL over the last week, ripples have begun to permeate in the Turkish business world. The recent geopolitical risks have put future Turkish economic relationships with Iraq at risk and are expected to damage relations with Turkey's second largest trading partner. Regarding the vast number of Turkish firms doing business with Iraqi partners, the growing uncertainty over the country's fragile stability has continued to raise warning signs.

According to Aksoy's statements, Turkish export volume to the Kurdish region has reached up to $3 million while the rest of the total volume is exported the south of the country and Baghdad. "Oil transport from Iraq to Turkey would be negatively affected by the ongoing unrest," said Aksoy.

While ISIL militants continue to seize towns in the northern provinces of Iraq while moving towards the south, reports show that all exports to the south of the country have been stopped. All goods of export have been held in storages. In addition, many Turkish businessmen residing in areas seized by militants are escaping towards the south of the country, to more secure places due to growing security threat around northern provinces.

All these conditions in Iraq have led to uneasiness among businessmen due to instability prone fragile Iraqi central government. Taking the stock market into account, the world oil market has already been shaken with the jump in crude oil prices. Oil prices have increased due to supply concerns and equities sold off. Turkey has led the way in a number of burgeoning Iraqi industries with the expanding sectors in construction, commerce and energy extraction. While becoming the second largest importer of Turkish goods, companies from Turkey have also played a crucial role in Iraq's reconstruction and development, building strong private and public companies. The establishment of the "High Level Strategic Cooperation Council" in 2008 and opening of a Consulate-General in Irbil in 2010 in addition to those in Mosul and Basra are important milestones for creating a long-term mutually beneficial strategic partnership between Turkey and Iraq.

According to Turkish Statistical Institute (TÜİK) reports on foreign trade, Turkish-Iraqi trade volumes have been showing steady increases. The data clearly shows that the trade volume between Turkey and Iraq has gradually increased over the years. The export volume amounted to $11,949,076 in 2013, comprising 7.9 percent of total share in export, from $ 1,820,802, 2.9 percent of total share in 2004. The complex problems arising from the wars, embargoes and internal strife in Iraq over the past few decades has affected Turkey-Iraq economic relations and will continue to be affected unless the ongoing unrest can be stopped soon. Unrest in the north and west parts of Iraq began on Tuesday after the Islamic State of Iraq and the Levant (ISIL) seized Mosul in northern Nineveh province.

Dr. Cemil Ertem, an economist, spoke to Daily Sabah about the possible effects of ISIL militants posing threat to the ongoing bilateral economic relations, saying "Even though the recent developments would affect trade negatively, everything would turn out just fine in the long run." "Turkish firms have had significant investments in the northern region. It seems that they have not been affected that much by the current situation."

Regarding Turkey's expanding role in the energy sector in Iraq, Ertem underscored the importance of agreements signed between the Kurdish Regional Government and Turkey, stating that the weakening of central government authority has led Turkey to have a greater say in the energy sector. "As there has been no national unity left in Iraq, Turkey should be able to strengthen its role in the energy sector in the long run. Turkey should insist on its tough stance over the energy agreements," said Ertem. It appears that regarding the long history of economic relations between the two countries, Turkish trade and investment relationship with Iraq would continue in earnest.
RELATED TOPICS