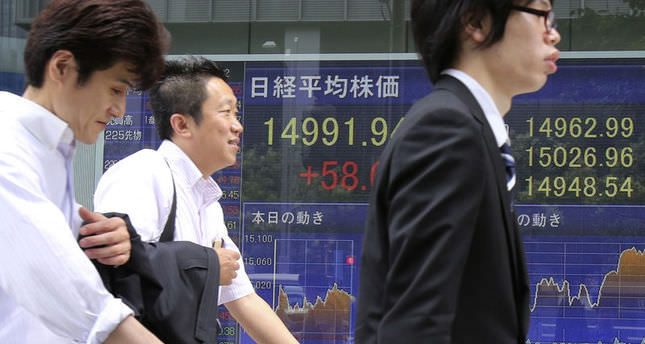 by Jun 19, 2014 12:00 am
Global stocks and emerging market assets rallied on Thursday after the U.S. Federal Reserve signaled that rising inflation won't trigger an interest rate rise any time soon, while Iraq turmoil sent crude oil futures to their highest this year.

The big loser in the wake of the Fed's policy statement and Chair Janet Yellen's press conference was the dollar. It fell against major and emerging market currencies, in tandem with U.S. Treasury yields, hitting a five-year low against sterling.

"The Fed managed to navigate through what some had expected to be a potentially tricky announcement by providing further fuel for both equity and Treasury market bulls - quite an achievement given both are already at levels that leave skeptics perplexed," Rabobank analysts said in a note to clients on Thursday.

The top blue-chip gainer in Europe was Rolls Royce RR.L, with the engine maker up more than 6 percent after it announced a one billion pound ($1.69 billion) share buyback.

The Fed on Wednesday slashed its 2014 growth forecast but expressed confidence that the economy will continue to recover steadily in the coming years, which could warrant a slightly more aggressive pace of interest rate hikes when they start.

But that probably won't be until the middle of next year, and Yellen dismissed the recent rise in inflation to its highest in over a year as "noise".

"There were those speculating that the Fed would have to come up with a more hawkish commentary and obviously they have been disappointed," said Neil Mellor, a currency strategist with Bank of New York Mellon in London.

"Nothing has really changed from the past few days, so there will be a propensity to buy some euros, and probably sterling in lockstep with that," he said.

The dollar index .DXY, a gauge of the greenback's strength against a basket of key currencies, fell 0.4 percent to 80.25.

Turkey's lira TRY= and South Africa's rand ZAR= were among the emerging market currencies to take heart from the Fed's policy stance.
In bonds, the benchmark 10-year Treasury note yield US10YT=RR fell to as low as 2.575 percent, its lowest in a week.

In commodities, Brent crude LCOc1 rose to a nine-month high of $114.80 a barrel hit on persistent worries over oil exports from war-torn Iraq, where Islamic militants seized much of its northern region as Baghdad's forces crumbled. O/R

Brent was poised for a third day of gains following a rise of more than 4 percent last week, with Iraqi government forces battling Sunni militants for control of the country's biggest refinery.