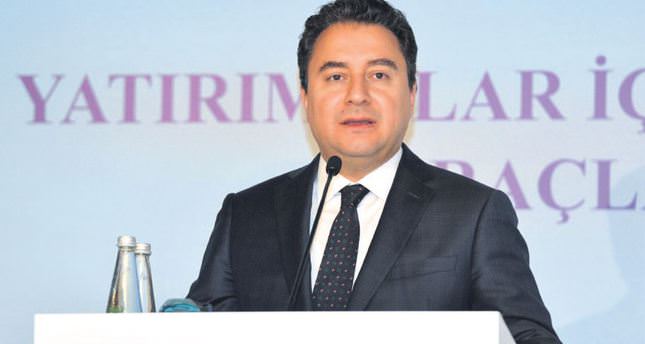 by AA Jun 21, 2014 12:00 am
Turkish Deputy Prime Minister Ali Babacan told a conference in Istanbul that there is a serious need for reforming infrastructure projects in Turkey and encouraged the private sector to play a greater role, which are mostly conducted or partnered by public enterprises. Babacan highlighted that by 2023, $700 billion (TL 1.5 trillion) will be necessary to support infrastructure projects in Turkey, of which $200 billion will be arranged through public-private partnerships, which many consider necessary because public capacity is not sufficient. Babacan emphasized that infrastructural investment tools should be fashioned with an eye on capital markets, and that tools and legislation
have to be arranged accordingly.

The conference held on Thursday in Istanbul's Marmara Hotel entitled "Developing Infrastructure Products for Investors" opened with speeches by Capital Markets Board President Vahdettin Ertaş and European Bank for Reconstruction and Development Vice President Manfred Schepers, both of whom spoke about the challenges and obstacles for infrastructure development in Turkey.

Turkey's major projects, enumerated by Ertaş, include a third airport in Istanbul, high-speed train lines and nuclear power plants. Ertaş said the new Capital Markets Law introduced in early 2013 reformed Turkey's legal technical and institutional infrastructure for capital markets and that these new regulations were drafted in line with EU directives. Ertaş emphasized that the required infrastructure investments must be made on time, adding that Turkey holds a geo-strategic position in terms of trade and energy.

Schepers said that while mature markets still need harmony between financial markets and regulation, emerging markets need guidance from more mature market leaders. Excessive involvement by the public sector in development projects is holding back private investments. Schepers added that there is nonetheless a need for sustainability and stability in infrastructure investment.

Turkey's Deputy Prime Minister Ali Babacan delivered the closing speech of the plenary session, in which he said infrastructure investments are important tools to develop economic growth and there is a serious need for reform of infrastructural projects within Turkey. Babacan said that in recent years, there has been rising interest in interest-free development. Some countries use "sukuk" financing, an Islamic financial certificate, similar to a bond in Western finance, which is compliant with Sharia or Islamic religious laws. Babacan said Turkey's Capital Markets Board has introduced five tools for "sukuk" financing in Turkey over the past one-and a-half years, but because the new laws were enacted during Gezi Park and the Dec. 17 graft investigations, these developments were overshadowed by those events.

Babacan said that despite "hiccups" in the last two years, once the political atmosphere "normalizes" after the presidential and general elections over the next year, the ruling AK Party believes Turkey will be a center of attraction for development of infrastructure projects. Babacan asserted that after the general elections in 2015, political stability will emerge, adding that human rights, freedoms and the rule of law are critical. Turkey needs to deal with some points which are "lacking," but Babacan argued ruling party reforms are in sync with the EU, adding that political reforms must be bolstered by economic reform.
RELATED TOPICS