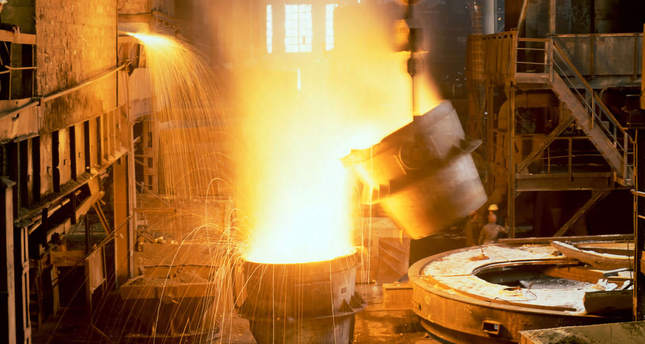 by Daily Sabah Jun 22, 2014 12:00 am
The security problem in northern Iraq that escalated with the terrorist Islamic State of Iraq and al-Sham's (ISIS) takeover of Mosul is worrying Turkish steel producers exporting goods to Iraq, and the current crisis is likely to strike a major blow to the Turkish steel industry. The percentage of exports to Iraq within total Turkish steel exports doubled during the period 2009 to 2013, increasing from 7 percent to 14 percent, from TL 1.4 million to TL 2.7 million.

Turkish Steelmakers' Association General-Secretary Veysel Yayan also noted that exports to Iraq have decreased in the last two months by 8 percent when compared to exports last year. After ISIL's regional invasions, except for limited exports to Northern Iraq, exports to the rest of the country are almost at a halt. "Exports to Northern Iraq account for about 20 percent to 25 percent of the whole export to Iraq. Exports to other parts of the country where construction activities have been very dense lately have completely stopped," said Yayan.

He further noted that it is impossible for construction to continue since Turkish companies are also finding it highly risky to continue their activities in the region. Yayan stated that the recent developments in Iraq had two adverse effects on Turkey: The suspension of investments in Iraq and extensive damage to exports to the country.

The export figures for June have dropped excessively, and the decline is expected to continue in July as well. "When compared to last year's figures, exports might decrease by about 80 percent in July, affecting the year-end figures as well," said Yayan.

Last year, total steel exports by Turkey were $15.8 billion, with 14 percent being delivered to Iraq. In particular, the sector suffered due to dumping probes that started in 2013, and improvement was expected for 2014, and no one expected the tensions in Iraq to turn into an armed conflict. However, he also pointed out the instability in the region would have an adverse effect on the steel industry.

Turkey's export just to Iraq equals the amount of export to 28 European countries and three times Turkish export to the U.S., which proves how important Iraq is in terms of exports for Turkey.

Yayan noted that their association is in touch with the related ministries, and while everyone acknowledges the severity of the situation, it will take time for stability to be established.

The top three countries that the Turkish steel industry exported to most are Iraq, the U.S. and United Arab Emirates. Moreover, a maximum increase in amount was observed in England, Israel, Morocco and the United Arab Emirates, while a maximum decrease was seen in Saudi Arabia, Italy, Oman and Iraq in 2014.

Turkey's steel exports, which have been on a decline since the second half of 2013, started to recover in April 2014. According to January-April 2014 data released by the Turkish Steel Exporters' Association (ÇİB), as compared with the same period of the previous year, steel exports increased by 7.1 percent and reached $4.7 billion, while the decrease in the amount of steel declined by 7.6 percent, dropping to 6.3 million tons. According to the ÇİB report, the Middle East continued to be the main market for Turkish steel exporters with 2.28 million tons, followed by EU countries at 1.22 million tons, North Africa at 773,000 tons and North America with 600,000 tons.