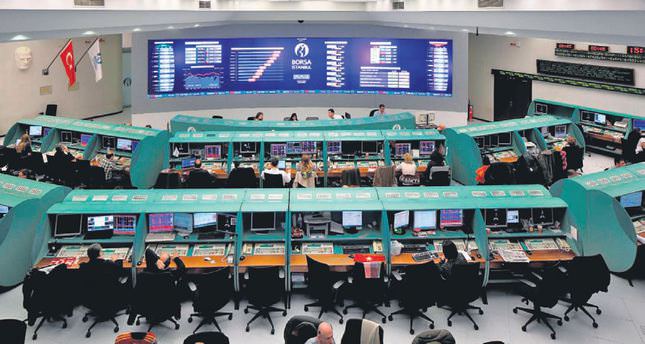 Borsa Istanbul rallied more than 30 percent within the last five months and recovered the losses stemming from the Dec. 17 operations and nationwide Gezi protests aimed at overthrowing the Turkish government

Turkey's stock exchange has been earning investors 32 percent within the last five months and only 2 percent is left to return the exchange to its level prior to the Gezi protests, which began as a small environmental demonstration on May 31, 2013, before turning into a nationwide illegal antigovernment demonstration under the control of extremist leftist groups. Borsa Istanbul 100 (BIST100) has brought investors a return of around 30 percent since February 21 and has increased up to the 83,000 point mark. If it rallies 2.3 percent more, then it will return to the same level as the day before the Gezi protests began.

The Index saw a record level the week before the Gezi protests started; increasing to 93,398 points and closing the week of May 27, 2013 at 85,990 points. On the day often seen as the start of the Gezi protests, May 30 2013, the Index had a harsh drop and the market value of shares traded at the stock exchange dropped by more than 10 percent in one day.

On June 3, the first business day after the start of the Gezi protests, the BIST 100 Index was 82,218 at most, while one day before the level was 84,867. Analysts point out that from a technical point of view such gaps in the market should be closed. Despite adverse events both in Turkey and abroad, losses have been compensated.

Due to the Gezi protests and Fed's abandoning of its monetary expansion policies , the Dec. 17 coup attempt that was orchestrated by followers of the shadowy imam Fethullah Gülen to destabilize Turkey's economic and political atmosphere and the following operations caused the Index to fall down to its lowest level, 60,754 points on January 27, 2014.

However, after the local elections in March, the Index showed a growing trend and has now covered the wide gap that occurred as a result of the Gezi protests. Analysts note that closing the market gaps are technically crucial for long-term trends and in this context, if the Index reaches 84,867, it would mean the market gap is closed and the Index is back to pre-Gezi protest levels.

Analysts further note that global markets are now used to the idea that monetary expansion policies are being abandoned since the U.S. decreased its bill purchase rate and interest rate increases are not expected to start before the second half of 2015. As a result, the risk appetite of investors that had been increasing in the second quarter still continues. Furthermore, the risk of political instability has decreased, resulting in positive stock quotas.

Speaking to Anadolu Agency (AA), Marbaş Securities' Research Manager, Üzeyir Doğan said that the Index is attempting to fill the market gap for the fourth time and in a most powerful manner since the Gezi Protests. Doğan said if the Index can be kept around 81,000-82,000 levels, it will rise up to 84,850 and the gap might be filled. "The last attempt to rise to the required level was unsuccessful due to the clashes in Iraq; causing a drop of around 6 thousand points. But this time, in accordance with the expectations from the Turkish central bank, and after the lowering of the interest rates, the profits have increased and the gap might soon be closed," said Doğan.

The stop-loss level might be deemed as 81,500 in the Index and as long as it is above 80,000 points, closing the gap after the Gezi protests might still be possible. Economists highlight that after the presidential elections to be held on Aug. 10, in which three will run including current Prime Minister Recep Tayyip Erdoğan, pro-Kurdish MP Selahattin Demirtaş and joint candidate of main opposition parties, Ekmeleddin İhsanoğlu, political uncertainties will disappear. According to market analysts, political stability will lead to a greater investment wave. It is also noted that the new president's economic view will have an impact on the markets.