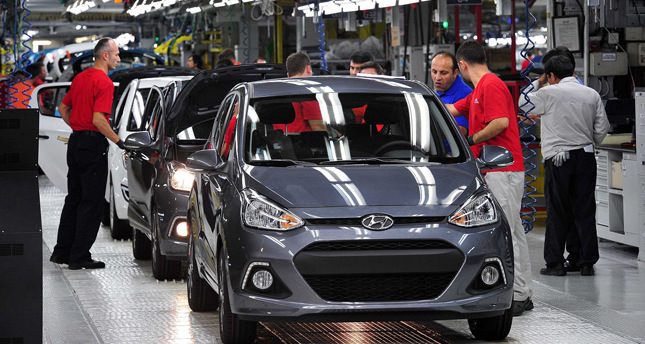 by AA Aug 09, 2014 12:00 am
Turkish industrial output and manufacturing grew less than expected in June, failing to bounce back completely from a fall in May, official data revealed on Friday.

According to the country's statistics agency, TurkStat, output for industry as a whole rose 0.1 percent in June, lagging behind a forecast of 1.83 percent in an Anadou Agency poll of economists, and compared with a fall of 1 percent in May. Friday's figures also indicated that seasonally and calendar adjusted industrial production in the country remained the same in the second quarter compared to the previous quarter.

The electricity, gas, steam and air conditioning supply made the strongest positive contribution to industrial production in the second quarter - something experts said was likely a result of warm weather. But mining and quarrying output fell sharply by 2.4 percent.

On the year, industrial output was up 1.4 percent. Meanwhile, inflation in Turkey rose slightly last month, from 9.16 percent in June to 9.32 percent, mainly because of a rise in alcohol, tobacco, communications and restaurant prices, the country's statistical authority said.

TurkStat figures show that Turkey's foreign trade deficit fell for the sixth month in a row. June's deficit dropped to $7.8 billion (TL 16.9 billion) from $8.6 billion in the same month last year. The downward trend began in January and gained momentum after the Central Bank of the Republic of Turkey introduced interest rate rises in response to the U.S. dollar's rise against the Turkish lira in mid-January.

Turkey's exports increased by 7.3 percent to $80 billion in the first half of 2014 while imports were at $105 billion in the first five months of the year, according to TurkStat. Exports were $12.5 billion in July and remained flat compared to the same month last year as the Iraq conflict took its toll on the country's trading partners, the Turkish Exporters' Assembly said.
Last Update: Aug 09, 2014 1:09 am
RELATED TOPICS