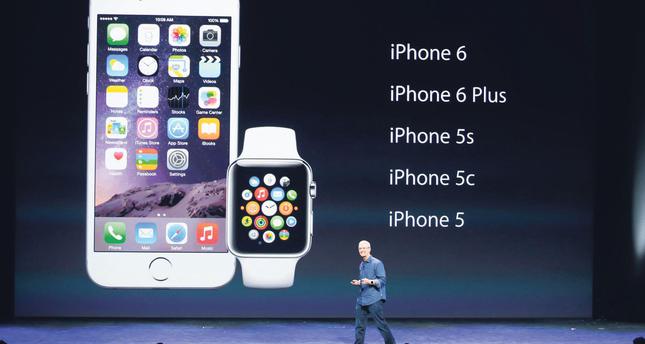 The tech giant moved to recapture its role as a trend-setter with its smartwatch and two large-screen versions of the iPhone. The new phones will start selling in Turkey on Sept. 26 with prices starting from TL 2,349

Apple unveiled its long-anticipated smartwatch, introducing a device that aims to put many of the functions of a smartphone onto a smaller screen that's never more than an arm's length from the wearer's eyes. The Apple Watch, the company's first completely new product in four years and its first wearable device, is also Apple's most ambitious expansion since CEO Tim Cook replaced Steve Jobs three years ago. The watch made its debut alongside a service that seeks to turn Apple mobile devices into a payment system that will eliminate the need for consumers to bring cash or plastic cards to the checkout stand. Apple Inc. also used the occasion to present the next generation of its iPhone two larger models that reflect the company's attempt to catch up with rivals that have been winning over fans with bigger screens that enhance videos and game playing. The bigger iPhones are expected to unleash pent-up demand among Apple zealots who have been pining for a larger screen, virtually assuring the new models will be a hot commodity this fall and through the crucial holiday shopping season.

Although the iPhone figures to be Apple's main moneymaker for the foreseeable future, the new smartwatch was the marquee attraction of Tuesday's show. The Cupertino company held Tuesday's coming- out party in the same Silicon Valley auditorium where Jobs unveiled the Macintosh computer 30 years ago. Just as the Mac convinced more people to buy PCs for the first time, Apple is convinced that its new watch will become a must-have accessory for the masses after it goes on sale early next year. The device also may turn into a proxy for how well Apple is faring under Cook. Apple has not entered a new market since Jobs died in October 2011, raising questions whether the company's innovative powers have been waning under Cook. Apple is a late arrival to the stillnascent market for wearable technology.

Several other companies already sell smartwatches that have been greeted with widespread indifference. The new phones will start selling in the Turkey on Sept. 26. iPhone6 prices start at TL 2349 ($1067) for 4.7-inch, TL 2649 for 5.5-inch. iPhone 6 will start selling in U.S., Canada, France, Germany, Australia, Japan, Singapore and Hong Kong on Sept. 19. In Turkey, Samsung leads the smartphone market. The Korean electronic company's share of the market stood at 45 percent according to data released by Statcounter. Samsung is follwed by Apple and Nokia with equal market shares of 18 percent, meaning 81 percent of the Turkish market is shared by three rivals. HTC and Sony Ericsson follow with 3 percent each and LG trails at 2 percent.

The iPhone 6 will feature a 4.7-inch screen, up from the 4-inch screen on the models released in each of the previous two years. The iPhone 6 Plus will boast a 5.5-inch screen and other improvements, including longer battery life, that will cost an additional $100. The screen resolution on the Plus version will be sharper than previous iPhones. With the larger screen comes a new horizontal view of the home screen.

Usually, icons are stacked vertically, even when the phone is turned horizontally. App developers will also have new tools to rearrange their content to take advantage of that larger screen. The new phones are not as big as Samsung's latest flagship phones 5.1 inches for the Galaxy S5 and 5.7 inches for the Note 4 but they will be large enough to neutralize a key advantage Samsung and other Android manufacturers have had.

Notably, Samsung's Note phone isn't getting bigger this year. Last year's Note 3 was 5.7 inches. Instead, Samsung is emphasizing other hardware features, such as a sharper screen. It's also releasing a model with a curved edge to display weather, time and other information on the side of the phone.

Apple says the new phones will be faster and have better battery life than previous versions. The phones will also have a barometer to estimate how much users climb stairs, not just how far they walk or run. Of course, some people still use their phones to make calls. So when there's poor cellular reception, iPhone owners will be able to make regular calls over Wi-Fi. The handoff between the two networks will be seamless. ın the U.S., this feature will initially be available through T-Mobile. The resolution on the camera is staying at 8 megapixels, while rival Android and Windows phones have been offering up to twice that amount.

However, the number of megapixels is only one factor in what makes a good photo. Apple says it is putting in new sensors for better shots. Apple is also improving a slowmotion video feature by allowing even slower shots. The camera will be able to take 240 frames per second, double what's in last year's iPhone 5s. Normally, video is at 60 frames per second. The new phones will start shipping in the U.S. on Sept. 19, with advance orders to begin this Friday. Starting prices will be comparable to those in the past $199 with a two-year contract for the iPhone 6 with 16 gigabytes of storage. However, the step-up models will have double the memory as before $299 for 64 gigabytes and $399 for 128 gigabytes. The iPhone 6 Plus phones will cost $100 more at each configuration.

Apple is calling its new payment system Apple Pay. Consumers will be able to use their phone cameras to capture a photo of their cards. Apple will verify it behind the scenes and add it to the phone's Passbook account so people can make payments at a retailer.

Apple announced several merchants that will accept this system, including Macy's, Whole Foods, Walgreens and Disney stores and Apple stores. Many companies have tried to push mobile payment services, but none has caught on widely. For security, the card number is stored only on the device. Each time you pay, a one-time card number is created to make the transaction.

The audience erupted with cheers as Cook proclaimed that he had "one more thing." It was how Jobs used to close his keynote addresses. That was named the Apple Watch, rather than the iWatch that many people had been speculating.Much of the interaction will be through the dial on the watch. It's used to zoom in and out of a map.

Users will be able to unlock room doors at Starwood hotels or remind themselves where they parked cars. The new watch will come in a variety of styles, with a choice of two sizes. The watch will require one of the new iPhones or an iPhone 5, 5s or 5c. It will be available next year at a starting price of $349.

Though much of the attention has been on new gadgets, the software powering those gadgets is getting its annual refresh. Apple considers iOS 8 to be its biggest update since the introduction of the app store in 2008. Existing iPhone and iPad users will be eligible for the free upgrade, too. iOS 8 will let devices work better in sync.