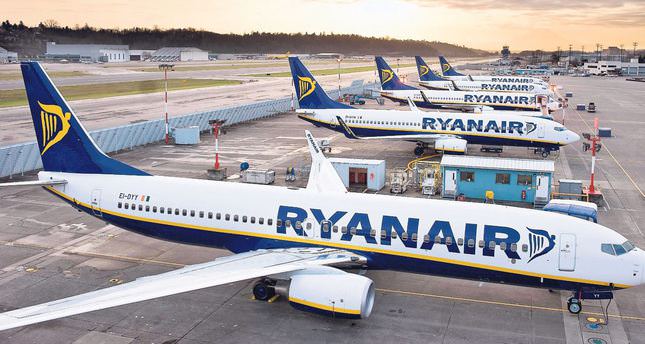 by Sep 10, 2014 12:00 am
Ryanair Holdings Plc, Europe's largest low-cost carrier, signed a deal on Monday to buy 100 Boeing Co 737 MAX jetliners for up to $11 billion (TL 24 billion), launching a new version of the singleaisle plane that will allow it to squeeze in more passengers and ramp up fare price wars. The Irish airline also secured options on 100 more of the modified 737 MAX 8s, dubbed the 737 MAX 200 because it can seat up to 200 passengers, bringing the value of the deal to about $22 billion (TL 48 billion), if all the options are exercised. Ryanair's chief executive officer, Michael O'Leary, said he aimed for the airline to carry 150 million passengers a year by 2024, up from an earlier target of 120 million and up from the about 82 million passengers it carried in 2013. He said Ryanair intends to exercise all the options because the 200 new planes are key to achieving its target growth.
Ryanair already is the largest airline in Europe, and O'Leary said the new Boeing planes will further cut Ryanair's operating costs, allowing it to take market share from legacy carriers such as Lufthansa, SAS, British Airways and Alitalia. "It means that we're going to expand and grow very strongly in Europe, both in new markets and in going in and taking traffic away from incumbent carriers," he said at a press conference in New York where he and the chief executive of Boeing Commercial Airplanes, Ray Conner, signed the deal. O'Leary said the new planes, which will have two additional doors, will seat eight more passengers than the 737-800 models currently in Ryanair's fleet. The planes reduce fuel consumption by about 18 percent compared with current models, and with the additional seats the cost would be about 20 percent lower, O'Leary said.

O'Leary said the extra seats would generate about 1 million euros of additional revenue per plane per year, most of which will go to the bottom line. Ryanair will pay a "modest" premium for the planes, O'Leary said, but the extra cost "is truly justified by the seats and engine economics." Conner characterized the premium as "huge," but neither executive would detail pricing. The 737 MAX 8 has a list price of $104 million, but airlines typically negotiate steep discounts. Last year Ryanair placed a $15.6 billion order for 175 Boeing 737-800 jets.O'Leary said in July he would keep that order, even as he studied the higher-density MAX version.